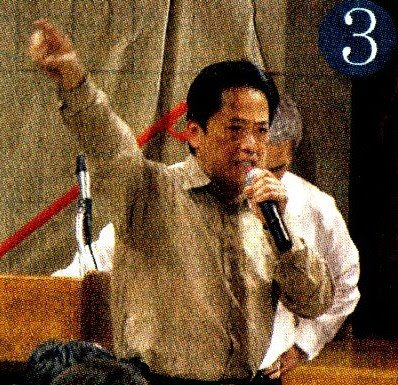 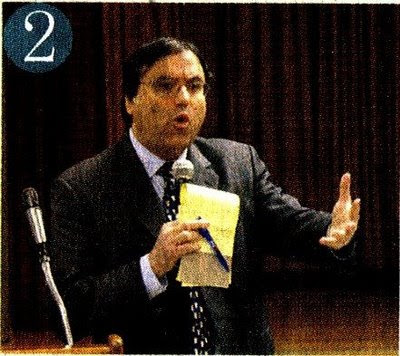 Two-and-a-half hours into Tuesday night’s hearing on the redesign of Chatham Square, the Department of Transportation revealed that it wasn’t a public hearing at all.
“We’re moving ahead with the Chatham Square project right now,” said Luis Sanchez, Lower Manhattan borough commissioner for the D.O.T.

That was not what the crowd of Chinatown residents wanted to hear.

“Boo,” they shouted. “Boo.”
“You were not honest from the beginning,” one audience member said. “This is a fait accompli.”
“This is not a public hearing if the decision has already gone through,” another called out. “This is a sham.”

The city’s proposed redesign of Chatham Square drew more than 100 angry Chinatown residents to P.S. 124’s auditorium Tuesday night. The city wants to reconfigure Chatham Square, a complex intersection where seven streets come together, based on the assumption that the closed section of Park Row, one of those streets, will never reopen. Park Row was closed to traffic after 9/11 to protect Police Headquarters.

The city’s $50 million plan for Chatham Square would directly connect E. Broadway to Worth St. and the Bowery to St. James Pl. The project includes a park in Chatham Square and a greened promenade along Park Row. A ramp would run along Park Row up to One Police Plaza, connecting Chinatown to Chambers St. and a subway entrance to the Brooklyn Bridge stop. Finally, new bollards and security booths would replace the unsightly temporary ones that currently block Park Row.

The city’s proposal is several years old, but it has not undergone a thorough public review until now. It follows years of frustration Chinatown residents have felt toward the city over the closure of Park Row and the parking placard abuses by police and court officers. A state judge ruled several years ago that the police had illegally taken over a public park, and engaged in “heavy-handed” tactics with Chinatown residents.

Some of the advocates acknowledge many of the changes would be for the better, but they are concerned already-struggling small businesses would not survive a long construction period. Josh Kraus, from the D.O.T., said in an interview last week that the project could take three years, but at this week’s hearing officials said it would be two-and-a-half years.
Residents did object to some aspects of the plan Tuesday night. They worried that the street reconfiguration would make the closure of Park Row permanent, and they questioned why the changes needed to be made now.

“The city feels this is a vital and long overdue project,” replied Seth Myers, from the mayor’s office. “Sure there are tweaks, we’ll see what we can do, but it’s really imperative for us to keep on our schedule.”

The city wants to move forward with the first phase of the project, the street reconfiguration, almost immediately, bidding the contract next month and starting work by next summer. The reason for the hurry is that the first phase of Chatham Square needs to be complete by the time work on the Brooklyn Bridge starts in the middle of 2010, the D.O.T. said. During that work, the Brooklyn Bridge will be closed for 12 weekends spread over a year and a half, with traffic routed onto the Manhattan Bridge and through Chatham Square.

The community and elected officials had one united message for the city Tuesday night: Slow down.

“This is a lot to digest,” City Councilmember Alan Gerson told the residents. “This will have an impact on the community for generations…. It is way too premature for the city to ask the community to take a position.”
Gerson said the plan has positive elements, but he also listed many concerns, including the future of Park Row and the impact on small businesses.
A representative of Assembly Speaker Sheldon Silver read a statement raising the same concerns and urging the city to reconsider the entire plan.
A D.O.T. spokesperson said later “further delays will not make Chatham Square any safer or less chaotic.”

At the meeting, Brian Ketcham, a traffic analyst hired by Community Board 3, praised the overall design but said he needed more information on pedestrian safety.
“If Park Row is going to stay the way it is — closed — it’s a pretty good project,” he said.
Ketcham had several suggestions, including an extra left-turn lane approaching the Bowery, which he said would cut travel time in half. Ketcham ran his own computer models of the intersection and found that even with 30 percent more traffic than the D.O.T. projected, vehicles still flowed smoothly.
“There’s hope,” he said.
Philip Habib, the city’s traffic consultant, had few details to offer on pedestrian safety but he said it was one of the project’s top priorities. The problem with the current intersection is that vehicles have to make too many turns, which increases the danger to pedestrians, he said. The new intersection will have more vehicles traveling in straight lines, reducing conflicts with pedestrians.

Many Chinatown residents agree with the city that the current intersection is unsafe, but they have a different solution: Move Police Headquarters out of Lower Manhattan and reopen Park Row, easing flow of traffic through Chatham Square.
When Police Commissioner Ray Kelly was asked by Downtown Express last week if there was a chance the street would ever reopen, he was doubtful.
“It is a security risk,” Kelly said. “It’s clearly a target…. To have a street that borders directly on Police Headquarters is problematic.”

Sanchez, from the D.O.T., promised that if Park Row reopened, “we would do whatever we needed to do to make it work” with the new street configuration.
The biggest objection to the plan Tuesday night was that small businesses would not survive the construction.
“Chinatown is fragile economically right now,” said Geoff Lee, a Chinatown activist. “We cannot handle it.”
Susan Chan, owner of Manhattan Florist at 87 Bayard St., said the Chatham Square construction would be a deathblow to her business.
“Fortune 500 companies can’t make it,” she said. “What makes you think a three-person company can make it?”

Chan runs her business with only one employee. Her husband helps out part-time, on top of his full-time job. As Chan spoke of leaving her 2- and 3-year-old children at home to come to the meeting, she appeared near tears. She said she never would have shown up if she’d realized the city was not going to listen.

The city pointed to the Lower Manhattan Development Corp.’s Small Firm Assistance Program as a potential solution. Under the program, small businesses on streets closed by public construction can apply for up to $25,000. The program, implemented earlier this year, has a number of eligibility requirements and a $5 million cap.
One problem the community highlighted was not with the design itself, but rather with communication. The project’s design was not available online until last week, and many people said they needed more time to respond to it.

After the city made its presentation Tuesday night, Paul Lee, a former Chinatown business owner, was the first member of the public to speak. He advised the audience, “Be loud!”
Steven Wong, a Chinatown resident who spoke next, appeared to take the advice, as he shouted into the microphone and refused to surrender it when his allotted two minutes were up.
“You’re here to listen to some decision that’s already been made, and they tell you it’s a public hearing?” he boomed. “They forgot — this is America.”

As the hearing wore into its third hour, tempers grew short. Several people stood to shout down speakers from the city and community board. A row of four police officers stood on the side of the auditorium but did not forcibly remove anyone.

Community Board 3 ran the hearing, which was co-sponsored by Community Boards 1 and 2. C.B. 3’s Transportation Committee will discuss Chatham Square and likely pass a resolution at its meeting Dec. 10. Board 1 and Board 2 may also weigh in separately. Sanchez, of the D.O.T., would not promise to follow the community boards’ direction if they urged the city to delay the project.

Several utilities are already doing test boring in Chatham Square to confirm where their lines are located. The work should finish next week, Sanchez said.
Sanchez said repeatedly that the overall project design is nearly finalized, but the piece that is still flexible is the open space.

Landscape architect Dale Schafer, from Thomas Balsley Associates, presented renderings inspired by contemporary Chinese design. Cherry trees would line the Park Row promenade, a green space dotted with splashes of red in the form of benches and other details. Where the path slips beneath Police Headquarters, the tunnel would have red-hued walls and ceiling.
Several speakers complimented the city for leaving Chatham Square’s Kimlau Memorial Arch in place, a structure dedicated to Chinese American soldiers. But others were concerned about the plan to move the Lin Zexu statue to its own plaza at the mouth of Park Row. Zexu was a Chinese scholar and official during the Qing dynasty in the 19th century.

Robert Lee was one of the last residents to speak at Tuesday’s three-and-a-half-hour hearing.
“The city just needs to wake up,” he said, “and realize that you cannot just bulldoze over our community.”
Julie@DowntownExpress.com
Posted by Watchdog at 8:54 AM