The Broken "Rings of Steel" at Foley Square

van.... were able to saw the banisters off of a solid granite staircase divider at the monument Triumph of the Human Spirit by Lorenzo Pace is the world’s largest site-specific installation venerating the experience of African American enslavement. 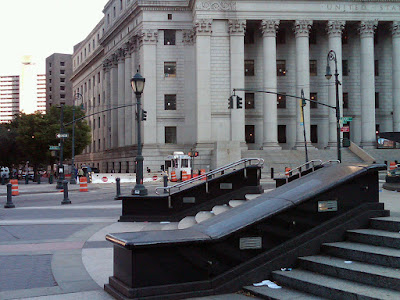 The stainless steel banister supports are 1" thick and the banisters themselves are 2" thick and weigh, well, alot! The thieves / vandals removed two sets of banisters which presumably required a van to remove from them from the scene.
Why would anyone do this?

this is why.
Posted by Watchdog at 9:02 PM No comments: 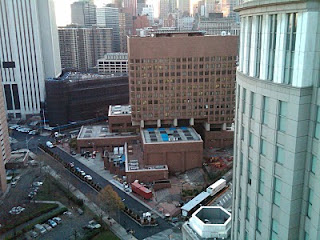 $30 MILLION JOINT OPERATIONS COMMAND CENTER BEING ERECTED NEXT TO POLICE HEADQUARTERS WITHOUT REVIEW
CIVIC CENTER RESIDENTS COALITION AND OUR ATTORNEYS AT DEWEY LEBOEUF LLP APPEAL SUPREME COURT DECISION
Chinatown and Civic Center resident plaintiffs and their attorneys at Dewey LeBoeuf LLP are appealing a decision of the New York Supreme Court holding that the NYPD does not need to conduct environmental and land use review before constructing a $30 million centralized "Joint Operations Command Center" facility at 109 Park Row - next to the Brooklyn Bridge.


The court found that no such review was needed because it compared the proposed NYPD Command Center with an FDNY call facility that was located at 109 Park Row over ten years ago, and found that they were "substantially similar."   We are arguing on appeal that the environmental and land use review statutes require a consideration of the "existing" environment -- not the environment as it may have been a decade ago.


Therefore, we contend the lower court committed error by disregarding the decade-long period of vacancy at 109 Park Row, by not holding a trial, and by refusing to permit them to conduct any discovery of the NYPD’s records to show the true scope of the planned project.


Our attorneys at Dewey LeBoeuf LLP will be arguing our case on at the Supreme Court, Appellate Division, First Department, which is located at ().  Our case will be heard some time between
We oppose installing a high risk security building next to Police Headquarters in Chinatown and the Civic Center area -- dense with residential developments,  across the street from a public high school, next to the Brooklyn Bridge (an already known terrorist target and one of the most recognizable bridges in the world),  multiple subway lines as well as other federal, state and city government offices/courthouses,  just blocks from City Hall, Wall Street,  and the World Trade Center -- defying common sense.


Its location increases the security risk to all of .


Did we learn nothing from the location/collapse of the Office of Emergency Management (OEM) at 7 World Trade Center (a known terrorist target) and the 9/11 terror trials debacle?


We hope the Appellate Division will recognize the fundamental flaws in the Supreme Court's decision and order environmental and land use review.
Posted by Watchdog at 2:37 PM 1 comment:

Caught in the middle of an acrimonious debate over a sprawling development set for downtown Flushing, two of the local Business Improvement District's top officials have jumped ship.
Chairman Jim Gerson quit Thursday, two weeks after Executive Director Mabel Law announced she would step down. Both have held their posts since 2003.
"I think I'm better off outside the BID at this point," Gerson said yesterday. He has been a vocal opponent of Flushing Commons - a 5-acre complex of condos and stores to be built on the site of a municipal parking lot on Union St. Gerson's resignation came moments after the BID voted down a proposal to commission an economic impact study of the project.
The city has allocated $2 million to a business assistance program, but the study would have determined how much each of the area's hundreds of small businesses would need to withstand construction, Gerson said.
The objection to the study was made by project developer and BID member Michael Meyer. "The BID mandate is for street cleaning, marketing and tourism," Meyer said. "It's not for political lobbying."
Now that he has cut ties with the BID, Gerson said he will be able to "speak more candidly" about his objections to the project. He has hired lobbyist Richard Lipsky and is meeting with City Council members as the project makes its way toward a Council vote at the end of the summer.
"I honestly think that the project could destroy the community," Gerson said. Law, who did not return calls for comment, has not been quite as vocal about her reasons for stepping down. But in the months leading up to her May 13 resignation, Law helped the BID draft resolutions calling for a business assistance plan, among other things.
Both Gerson and Law threw their support behind the resolutions, much to the dismay of project supporters. "After we passed the resolutions, they made Mabel's life very, very difficult," Gerson said. Meyer called the measures further evidence of the BID's politicization.
"The purpose of the BID was being abused," he said. Law has said she will not leave the BID until her successor is appointed, which means she will likely still be in office when the city Economic Development Corp. unveils its plans for the business assistance program. Councilman Peter Koo has also secured between $100,000 and $300,000 in additional funding for a supplemental assistance program, said spokesman James McClelland.
"This project is the biggest project that has come to Flushing in a while," Law told the Daily News last week before Gerson's resignation. "How can you really tell who is going to lose business?"