Councilman John Liu gets an earful: 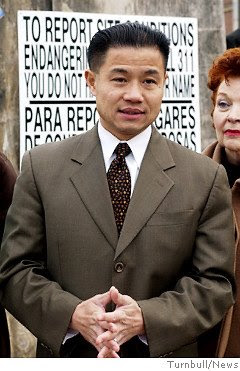 CCRC has recently received a letter submitted to John Liu by citizens of Chinatown, it reads as follows:

As Chairperson of the Council's Committee on Transportation, there is a struggle presently going on in Chinatown to halt/stop/delay the construction slated to begin in June 2009 regarding the reconfiguration of Chatham Square, you should not be sitting on the sidelines. Please voice your support for Chinatown at this time - don't let this 3 year / $50-million construction project start on schedule during this time of recession. It would mean more longtime Chinatown small businesses folding; after Chinatown has suffered 7 long years of parking placard abuse and 7 long years of Park Row Closure. $50-million of taxpayer money and 3 years of construction - all during a time of recession!! By now, it is common knowledge that Chinatown has had the slowest recovery of all neighborhoods since 9/11 (due to Park Row's closure and rampant parking permit abuse for 7 years - and these strained conditions exist even now!). $50-million would be better spent providing increased bus service to Chinatown - now that would be giant step toward economic recovery for Chinatown!

I recently spoke with traffic expert Brian Ketcham on 12/10/2008 at a Community Board 3 Transportation Committee meeting and asked Ketcham specfically if any Economic Impact Study, and, if a Pedestrian Safety Study were included in the proposed Chatham Square reconfiguration plan. Ketcham told me that these crucial studies were NOT included in the plan. As Councilman Gerson stated, the plan is "premature".

This is a partial (confirmed) list of Chinatown community organizations, electeds, etc. that oppose this Chatham Sq reconfiguraton / construction schedule,
(This list is growing rapidly larger day-by-day):
Those Against the Chatham Square reconfiguration plan and schedule:

As it stands now, Community Board 3 is not responding to the will and concerns of the local community, and CB3 is presently sitting on the fence, "withholding approval" for the Chatham Square reconfiguration plan. I urge you to please join the other electeds noted above (testimony attached) to stop the Chatham Square reconfiguration and construction.

Hopefully, you will not be like CB3 and sit on the fence for Chinatown. As Chairperson of the Council's Committee on Transportation, a few words from you would mean a lot for Chinatown.

Chinatown Partnership and Asian Americans for Equality have not added their names to either list. What is their position?