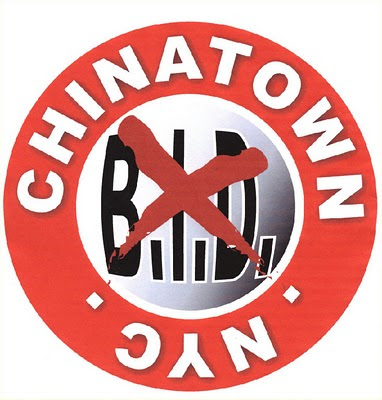 Community Board # 3 Manhattan
Voting tonight on the proposed Chinatown Business Improvement District
SPEAK OUT - sign in before 6:30 pm
meeting at :
Full Board Meeting - Tuesday, December 21 at 6:30pm
PS 20 - 166 Essex Street, (E Houston & Stanton Sts)
Posted by Watchdog at 10:59 AM No comments: 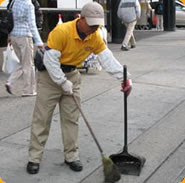 we received this press advisory today from Chinese Staff and Workers:
What: Press Conference

Why: On Monday, cleaning workers of the Chinatown Partnership Local Development Corporation (CPLDC), who is pushing the BID in Chinatown, will speak out against the BID and also against the management and gross misuse of public funds by CPLDC.

If the Chinatown “Business Improvement District” BID is successful, it will clean the Chinese people out of Chinatown.
“We all want a cleaner, healthier environment for our community, but not at the expense of displacing people who work and live here. We are in an economic crisis now. The City is already forcing us to pay higher fees and taxes. Now they want us to pay for services the City should be taking care of! They don’t care about small businesses here. They don’t care about working people here. They won’t be satisfied until all the Chinese are gone,” said Xiu Yun Guo, resident and worker in Chinatown.

“I was fired after working at CPLDC for two years, because I did not give a red envelope to the management. Only those who bribed the management got to keep their jobs. My co-workers couldn’t take any time off to take care of their family. They pushed out those who were older. And the management doesn’t do anything all day except goof around. Are these the kind of people who can really improve Chinatown?!” said Mr. Sun a former cleaning worker at CPLDC.
Posted by Watchdog at 9:19 PM No comments: 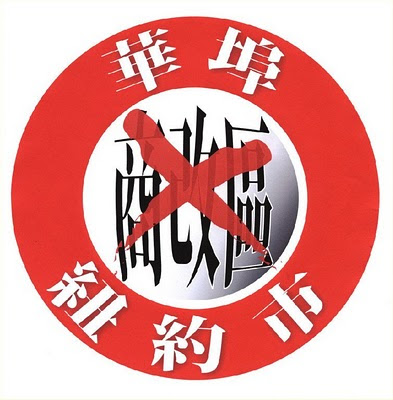 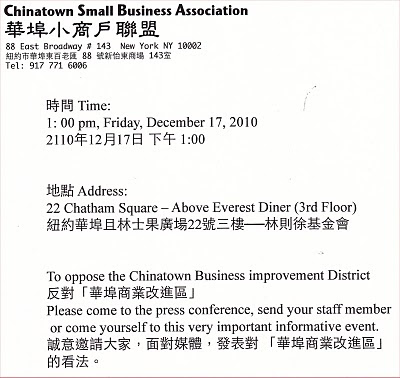 Posted by Watchdog at 7:13 PM No comments:

Long time activist and resident Cathy Glasson has been fighting the City of New York for twenty years. She knows more about health codes, building codes, statutes than most people in City government. She's able to quote chapter and verse to NYPD, and city agencies when they give her the run-around. She testified against a Chinatown BID, and explained that a BID simply won't be able to tackle the quagmire that is NYC's bureacracy.
Posted by Watchdog at 11:17 PM No comments:

DNAinfo.com reports on charges of RACISM by Soho residents - re: BID

Click below to hear Lora Tanenbaum, former chair of the Econ. Dev. Land Use committee of Community Board 2 - testifying on why she does not approve of the proposed Chinatown BID map because she feels it includes parts of traditional SoHo.
BUT is she guilty of RACISM? you decide.
Michael Salzhauer - one of the Chinatown Partnership's chief supporters, said "It's silly to the point of racist, - cleaning benefits everybody." quote from : DNAinfo.com reported on the RACISM charge by Chinatown BID supporters
Posted by Watchdog at 10:55 PM No comments:

Parks have no business being in the CHINATOWN Business Improvement District

Chinatown resident and small business owner Shane Yamane testified at Community Board #2's Economic Development and Land Use Committee and asked Chinatown Partnership LDC to remove Columbus Park from the proposed Chinatown BID - they did not respond.
"The Park is new, the sidewalks are clean, it has no business being in a BID" said Yamane.
Posted by Watchdog at 10:30 PM No comments:

New York City Council’s Transportation Committee held a meeting today on the impact of bicycles and bike lanes in the city. Committee chair James Vacca told the packed room that when it came to bikes, he knew passions were high. “Believe it or not,” he said, “few issues today prompt more heated discussion than bike policy in New York City.”

And it showed: there was a long wait in line to clear security, and the City Council hearing room’s overflow room had to be used. More than 70 speakers signed up to voice their opinions about bikes and bike lanes, but the hot seat belonged to City Transportation Commissioner Janette Sadik-Khan, who was grilled by council members for almost two hours. (Click the TITLE of this blog posting to hear her statement, as well as the extensive—nearly two hour—question and answer session)

Posted by Watchdog at 1:44 AM No comments:

CLICK BELOW to hear the PODCAST provided by WNYC
Originally aired 11:30 am Dec. 8th 2010
WNYC has the INCORRECT recording on their website.
HERE is the correct recording which aired on Dec. 8th. <--click
Eric Enquist of Crainsnewyork.com is a political reporter for Crain's New York. At the end of this piece he diminishes (quite irresponsibly) my comment about bill # A11672, as a "red herring". Although Mr. Enquist is entitled to his opinion, keep in mind that HE's not going to be paying MY rapidly escalating BID fees attached permanently to my property tax assessment with no way out.
After calling The Comptroller's office Monday Dec. 6th, I learned that John Liu is not going to comment on #A11672 with regard to how it relates to prevailing wages (which his office sets for NYC Government workers) and Business Improvement Districts - not because the bill makes no mention of BIDs, but because it simply hasn't been look at it that context. To diminish this bill in any way is foolish because even without the bill making it into law, the unions are already scrutinizing wage practices of BID contractors which puts a whole new spin on how everyone is going to pick up the trash from now on.
Daniel Massey of Crainsnewyork.com reports the story THIS WAY:
"In a new wrinkle to a larger legislative dispute that has festered for months, building-service powerhouse 32BJ SEIU has filed a complaint with New York City Comptroller John Liu alleging that the Union Square Partnership business improvement district is covered by existing prevailing wage law and has been underpaying workers by more than $14 an hour.

The union says it bases its argument on interviews with workers and a copy of the BID's contract with the city, which it obtained via a Freedom of Information Law request. It has requested contracts of BIDs across the city to evaluate whether they too might be in violation of the prevailing wage law.

In the complaint, the union alleges workers employed by BID subcontractor Atlantic Maintenance Corp. are paid as little as $7.41 per hour. The hourly prevailing wage for office cleaners in the city is $21.80, plus $8.36 in benefits; for security officers, it's $11.75, plus $4.46 in benefits.

“Well-funded BIDs have no financial reason for cutting costs on the backs of working New Yorkers,” said a 32BJ spokeswoman. “And some may be violating the law that prohibits tax dollars from being used to finance poverty-like jobs.”

Dan Biederman, chairman of the BID Association, an umbrella group representing the city's 64 BIDs, said the complaint is the latest in a series of “ongoing lobbying efforts” by 32BJ surrounding a prevailing wage bill under consideration in Albany that would end exemptions for public utilities.

A spokesman for the Union Square Partnership said in a statement that the BID's sanitation workers are represented by Amalgamated Industrial and Toy and Novelty Workers Local 223 and that a new contract went into effect July 1. “Atlantic Maintenance negotiated a comprehensive, fair and mutually agreed upon compensation package through a collective bargaining process that includes wages ranging from $8 to $14 per hour, paid vacation, and health coverage,” he said.

Senator Daniel Squadron hosted a town hall event to hear first hand from residents from Chinatown and the Lower East Side on November 30th. There were many issues raised, too numerous to list here, but we've attempted to provide you with an audio podcast excerpt of some specific complaints raised about Chinatown pedestrian safety issues.
Click here to hear an audio podcast EXCERPT about the numerous bus lines that have been eliminated in the area.
Posted by Watchdog at 11:18 PM No comments: