NY TIMES reports - NYPD will crack down on scofflaw cyclists - a victory for CCRC, Coalition Against Rogue Riding and Nancy Gruskin

The New York Police Department plans to step up enforcement of bicycle safety in parts of the city that have seen a disproportionately higher rate of collisions involving bicyclists, city officials said Thursday.
The initiative, which would be aimed at common cycling infractions like running red lights or riding on the sidewalk, comes after numerous complaints about two-wheeled scofflaws and recent protests against new bicycle lanes added to streets in Brooklyn and downtown Manhattan.
“We’ve installed 250 miles of lane over the last four years and thousands of new bike racks,” Janette Sadik-Khan, the city’s transportation commissioner, said at a news conference. “We have been friendly to cyclists. Now it’s time for cyclists to be friendlier to the city.”
Ms. Sadik-Khan, a cyclist herself, has led the Bloomberg administration’s efforts to siphon off city road space from automobiles in favor of pedestrians and bicyclists, an effort that officials say creates a more balanced use of the city’s streets. Critics charge that City Hall has placed a stigma on car ownership and unilaterally removed traffic lanes for the use of a small minority of residents.
The result has been that bicycling, once a niche, even antiauthoritarian, mode of transport, has entered the New York mainstream, and cyclists and pedestrians alike are trying to adjust.
The city has issued 26,000 moving violations against cyclists so far this year, still a fraction of the 800,000 violations issued against motor vehicles, said Paul J. Browne, the Police Department’s chief spokesman. But on the Upper East Side, Mr. Browne said, the most frequent complaints heard from residents had to do with bicyclists.
“You are having more incidents where pedestrians are getting seriously injured, or close calls, even if it’s in a bike lane,” Mr. Browne said. “It is probably increasing because bicycle use is increasing. I would think that’s part of it.”
Running red lights is one of the more frequent problems, Mr. Browne said, and police officials acknowledge it can be difficult to enforce these rules.
“It’s not always easy to do,” said Raymond W. Kelly, the police commissioner, who joined Ms. Sadik-Khan to announce the initiative. “Bicyclists move along at a very good clip. Particularly when a police officer is by himself or herself, it’s difficult to do.”
The announcement came hours after a morning of dueling demonstrations along Prospect Park West in Brooklyn, where there has been a neighborhood uproar about that boulevard’s newly installed bicycle lane. Some of the aggrieved believe the lane has created more congestion, while supporters say it has calmed traffic and made the street safer. Supporters outnumbered the opponents roughly three to one.
Ms. Sadik-Khan said the city had found that the lane cut down on speeding cars. The commissioner was asked by a reporter about protest signs that warned New Yorkers, “Don’t be conned by Sadik-Khan.”
“Lot of marketing talent there in Prospect Park,” Ms. Sadik-Khan said.
Opponents of the bike lane, however, argue that their quality of life has suffered. “Things have come to a critical pass,” said Lois Carswell, one of the protest organizers. City officials, she said, “have already declared it a success” before any formal review could be completed.

Posted by Watchdog at 7:33 PM No comments:

The Department of Transportation can't fudge the numbers any longer thanks to the hard work of Nancy Gruskin and Jack Brown . For possibly decades now the Dept. of Transportation has relied on faulty data when reporting on the the number of accidents between bicycles and pedestrians in NYC.  It's no wonder then that bike lane and cycling advocacy groups used this faulty data, without bothering to check its legitimacy,  to further their agenda regardless of impacts to small business and resident opposition.  It's dangerous when our City government relies on dubious data, it's even more dangerous when non-profit groups use that data to install permanent changes to our City streets.
Now that actual recording of bicycle on pedestrian accidents will be kept, at least while the pressure is on, seniors, children and the disabled community can begin to see hope in reclaiming their sidewalks, crosswalks and streets from ill-informed transient zealots.
NEW YORK (CBS 2) — Pedestrians hit and injured by bicycle riders – it’s a statistic that no one kept. However, after CBS 2 exposed the gap in record-keeping, New York City is moving to fill in the blanks.
In a city where pedestrians and bike riders are clashing, some advocates say something is missing in the debate – reliable injury data.
“Hard data on incidents between bicyclists and pedestrians, it’s a real missing link,” Nancy Gruskin, of the Gruskin Family Foundation, said.
Gruskin learned that the hard way after her husband, Stuart, was fatally injured by a reckless bike rider last year in Midtown.
As CBS 2 revealed in our “Bike Bedlam” reports, New York City hasn’t been collecting data on the number of pedestrians injured by bike riders.
After CBS 2 helped Gruskin get a meeting with NYC Transportation Commissioner Janette Sadik-Khan, however, some progress has been made.
DOT told Gruskin the state has agreed to use motor vehicle accident forms to finally document accidents between bike riders and pedestrians.
It’s a victory for Gruskin and her bike safety foundation, but one that won’t come immediately.
The data collection won’t begin until next April, and the numbers won’t be crunched for months after that, even as the city moves forward with plans to build miles of additional dedicated bike lanes.
“I think they have an agenda, and they’re gonna push that agenda through,” Lois Carswell, of Seniors for Safety, said.
On Thursdays, the critics will call for the city to rip up the controversial bike lane on Prospect Park West. This being New York City, though, there will be a counter-protest by bike lane supporters, as the debate spins on and on.
“I’m very happy with the results of DOT’s work here,” one resident said.
While the city and state work to start collecting the injury data, bike safety advocates are working with hospitals to document the problem using emergency room reports.
Posted by Watchdog at 11:34 PM No comments:

Great News!  CBS-TV's Tony Aiello will be reporting on TODAY'S  news at 5:30pm (Wed. Oct. 20th)  that the State DMV will be changing their MV-104 reports as of April 2011 to include the data collection of bike on pedestrian incidents.  This change came as a direct result of the "Bike Bedlam" series where we were able to prove that there were no accurate stats of bike on pedestrian stats in New York City.  This represents a major step forward for pedestrian safety and the goals of the Foundation!!  We are still trying to work on short-term data collection as the results won't be public for at least 2 years, but this is wonderful news for the long term...

Entrepreneurship alive and well in Chinatown - Everything Frosted Bakery 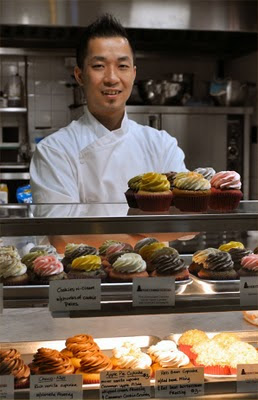 Terri Lu and JohnWu are among the new generation of Chinese American entrepreneurs who have, despite being able to locate elsewhere in the City,  decided to plant themselves firmly in Chinatown with their new bakery Everything Frosted. "I grew up here, my mom works around the corner, I went to school here, I feel very comfortable here."says Terri.

John has a similar relationship to the area "When I first came to Chinatown I lived on Bayard St. , then I moved around, but always in this area. Most of my life has been spent here in Chinatown."
"Being close to home was actually important to us because of the amount of hours we knew we'd be investing" said Terri. Chinatown, only minutes from where they live, was the best of both worlds in terms of being close to their community, and finding inspiration from native ingredients. Both partners knew early on in their careers that they would be bringing their talents back to the neighborhood they loved as kids.

Terri's background as a professional event planner for a midtown business laid some of the groundwork for Everything Frosted. "At my last job we had a primarily Jewish clientèle, we did a lot of Bar Mitzvahs and weddings, and some corporate events as well. After my career with that company I was inspired to do events for the Asian community because there are so many more traditions that I wanted to explore. Even though I know a lot about my own culture, I found that there was more to learn about what the Chinese community wants in an event." said Terri.

John's career began in a Chinese bakery. It was there that he thought to explore the larger repertoire of baking, after exposure to the various flavors native to the Chinese culture.


He wanted to eventually bring his knowledge and experience back to the Chinese community to see what they would think about combining his newfound techniques with traditional and familiar ingredients such as red bean, green tea, and jasmine. Over a decade later, and apprenticeships with two French masters, he has achieved his goal.

Looking back John recalls one of his teachers who spoke only French. "It was very challenging, but I picked up enough French from him, at least what he needed to teach me. I learned a lot from him. He tried so hard to teach me, that I put my entire heart into it. Within a short time he left that restaurant and called me to join him at a new place. That is how I met Bill, (the Whitehouse Executive Pastry Chef Bill Yosses.)  The two chefs were friends, and I started working for Bill at Joseph. (Joseph Gurrera, owner of Citarella)"   said John. Yosses who joined the Whitehouse in 2006 worked shoulder to shoulder with John prior to landing his prestigious position at the Whitehouse. 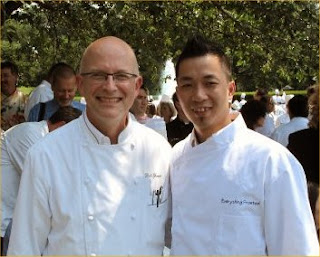 John continued "I like Asian desserts and I love tea. What I learned from Bill is that I have to create my own flavors.


"I like to use Asian ingredients and come out with things people have never tried."


"You don't see a lot of bakeries with black sesame frosting. Over the summer we had a lychee frosting that was very popular."

John introduced jasmin, lychee, black sesame and red bean to many of his non-Asian customers who are often on a lunch break. 90% of  the flavor combinations of cupcakes, which are appetizingly displayed at eye level,  can be adapted to wedding or birthday cakes, jasmin cake with green tea frosting for example.

In the nine months since they have opened Terri and John's "hidden gem" of a business has reached beyond their professional Asian clientèle. With recent press and very active word of mouth advertising they are enjoying a comfortable level of success in their first year in Chinatown. 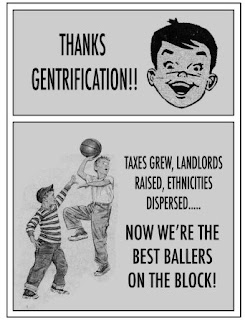 NOTE: This image is NOT affiliated with the Museum of the City of New York, or this program.
Tuesday, October 5, 6:30 PM
In Danger of Extinction: Gentrification in East Harlem and on the Lower East Side
Residents of these two diverse, vibrant neighborhoods have long dealt with the pressures of gentrification and have struggled for affordability.  Their story is told in two recent documentaries.
Join the filmmakers for a screening and discussion of The Lower East Side: An Endangered Placeby Robert Weber and Whose Barrio? by Ed Morales and Laura Rivera, with opening remarks by The Honorable Melissa Mark-Viverito, New York City Council, District 8.
Co-sponsored by the office of the New York City Council Member Melissa Mark-Viverito and East Harlem Preservation.  This program is presented as part of the ongoing series The Urban Forum: New York Neighborhoods, Preservation and Development