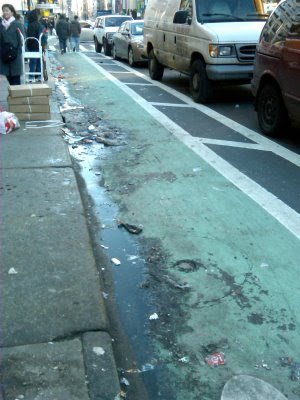 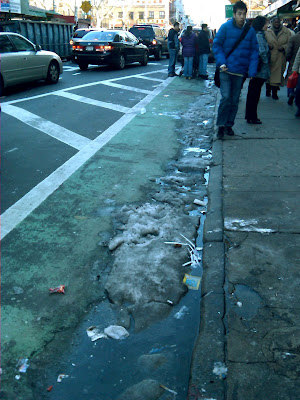 Photos of the bike lane on Grand St. unreachable by street sweepers because cars are parked adjacent to it, during holidays.

A very well written critique appeared in this week's Downtown Express about the slippery poorly maintained bus islands at Broadway and White St.

Similarly , the bike lanes on Grand St. were very poorly maintained after the snow this past week. BOTH are signs that maintenance has become a thing of the past for the DOT once these poorly planned "ideas" were set into place. Apparently, during holidays street sweepers can't access the curb any longer because cars are parked adjacent to the bike lane, brilliant.

Slippery bulb
The bus island at Broadway and White St. gleamed Monday morning with compacted layers of snow, resulting in a slippery mess that would net any private property owner a fine. From the icy footprints covering the island, it looked like no one had cleared it off all weekend — making it a potentially dangerous place to wait for the bus.

The city Department of Transportation has been struggling lately to explain the merits of bus islands or bulbs, fenced-off sidewalk extensions installed last year. Luis Sanchez, D.O.T.’s Lower Manhattan borough commissioner, has already said the department can’t tell whether the bulbs are successfully speeding traffic. If he still wants to convince the public that the bus bulbs are a good idea, we suggest that he grab a shovel.
Posted by Watchdog at 2:25 AM

Can you imagine spending $250,000 of our taxpayer money so that all traffic takes 15 minutes to go from Houston to Fulton St (slow down cars to match the bus rate)? Sanchez's goal must be: if everybody avoids coming into the city, more commercial businesses will fail and we can have less tax revenue! NYC residents will be too busy worrying about their taxes going up to notice that the DOT is spending and bungling up the city.

I noticed that at East Broadway & Catherine St corner bump-outs, the crowd of pedestrians stand way onto the bike lane to wait to cross. They will not even move for a car trying to go around another car that is stuck waiting to turn into Catherine St. Another DOT expense that made things worse. (I'm not sure if a car is ever permitted to go into a bike lane, even if it's to go around a stopped car - does anyone know?)