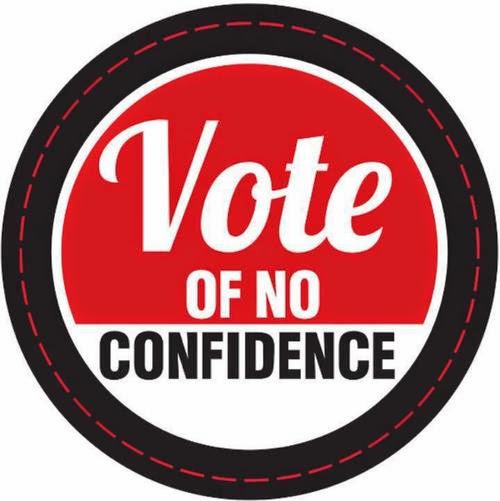 The much revered Chinatown Consolidated Benevolent Association, which represents numerous smaller family and merchant associations in Chinatown has formally withdrawn its membership and support from the Chinatown Working Group. In April of 2014 CCBA's Board of Directors voted NOT to support the CWG's plan, the formal withdrawal seems a logical and expected decision. 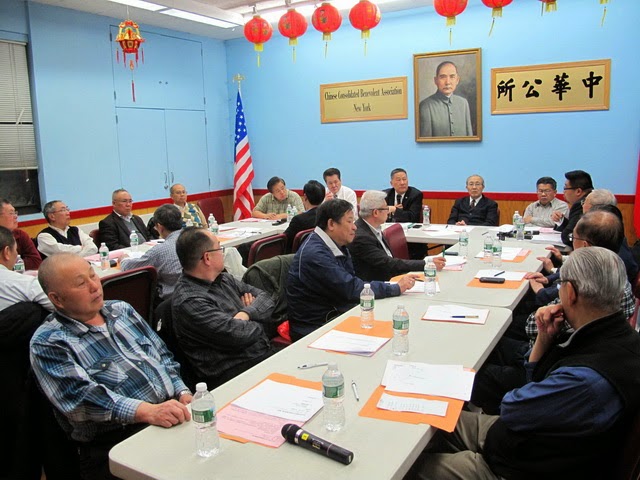 Though the boards of Chinatown Consolidated Benevolent Assoc. (CCBA) and its sister Organization Lin Sing Association deliberated over the merits of the plan submitted by the Pratt Group, (the planning agency tasked with formulating a plan to submit to the Department of City Planning, City Council and the Mayor), it was ultimately decided that for reasons that " the surveys were the unilateral product due to lack of communication, and did not reflect the true situation of Chinatown". This is after The Pratt Group and members of the Chinatown Working Group made a presentation to the Board of CCBA in June 2014 in an effort to iron out details and misconceptions they thought CCBA had with the plan.

In short CCBA, Lin Sing Association and The Chinese Chamber of Commerce (all organizations that are over 100 years old in Chinatown), didn't have confidence in the surveys used to collect the "data" for the Chinatown Working Group's plan and they felt the list of properties included in the plan for special designation as historic and / or culturally significant was not necessary.

Surprisingly the Chair of the Chinatown Working Group had a flippant response to the ever growing number of long standing Chinatown groups withdrawing, he seemed to imply that "it doesn't matter" that these last three groups withdrew.

At what point then, does it matter, if more and more groups pull out of the Chinatown Working Group? What validity does the document hold if no stakeholders are supporting the plan?

So far the groups in Chinatown that have withdrawn from the Chinatown Working Group are:

A full translation of the World Journal Article :

During the standing committee meeting of CCBA(Chinese Consolidated Benevolent Association) on the evening of 26th this month, New York CCBA has passed the decision that CCBA, Lin Sing Association and China General Chamber of Commerce withdraw from the CWG. WU Ruixian, the president of CCBA, said it is the result of their different ideas with CWG and discontent for the Chinatown surveys made by the Pratt Center/Collective Partnership who is authorized by CWG. They believe that the surveys were the unilateral product due to lack of communication, and did not reflect the true situation of Chinatown. In response, WANG Zhijie, the president of CWG, said these three groups have not attended meeting for two to three years, and their withdrawal or not make no difference.

In the standing committee meeting, all member of the CCBA unanimously agree to withdraw from the CWG, Lin Sing Association and China General Chamber of Commerce followed suit. WU Ruixian said Pratt Center/Collective Partnership did not communicate with CCBA and other groups durning their Chinatown Collective Studies Project. XIAO Guiyuan, the president of Lin Sing Association, argued that the CWG did not fully understand the actual situation of Chinatown and thus can not take the practical benefit of Chinatown into account. In 2:30 p.m 27th this month, these three Chinese groups will hold a press conference in the meeting room of CCBA, aiming to told the real difficulties of Chinatown development to the municipal government.

Since the establishment in 2008, the CWG has went through several reorganization which leads to increasing internal divergence. In the end of last year, the Chinatown surveys made by the Pratt Center/Collective Partnership who is entrusted by the CWG has generated discontent in the communities. The zoning in the plan was deemed to restrict the development of property owners and small tenants in Chinatown, and hinder the Chinatown development. WANG Zhijie, the president of the CWG has reiterated that all members of the CWG are volunteers; CWG is glad to explain any plans to the communities and all problems are open to discussion, but ‘refuse to attend the meeting’ is of no help to solving the problems.

Posted by Watchdog at 3:35 PM No comments:

Court House Plaza about to be closed to pedestrians? 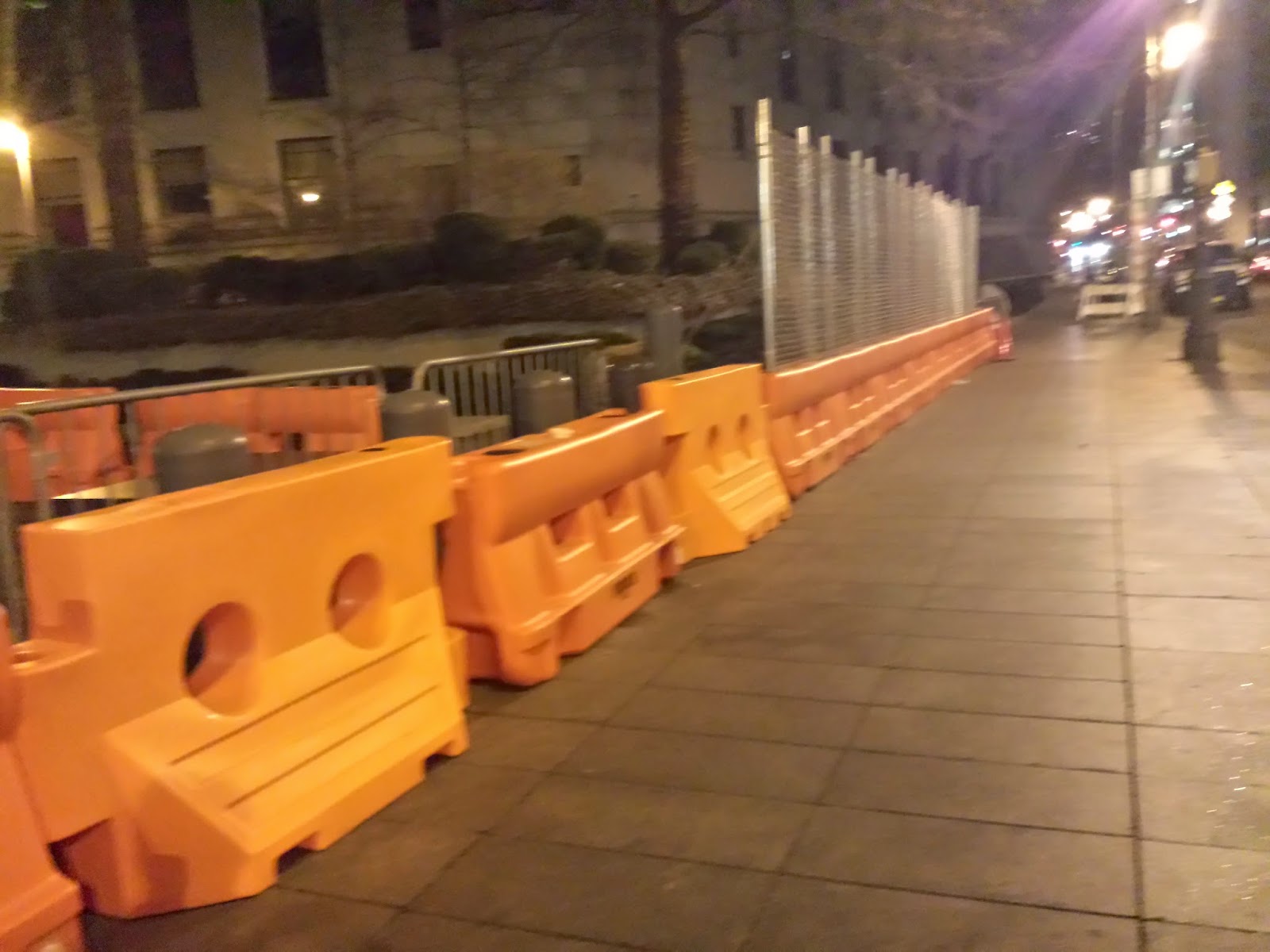 Around the time that Osama Bin Laden's son in law, Suleiman Abu Ghaith, was being tried at the Federal Court House on Worth and Mulberry Street, we noticed two small guard booths had sprung up. These two white low quality structures were placed at either end of a public plaza that sits between The Moynihan Court House and the back entrance to the U.S. Supreme Court building. 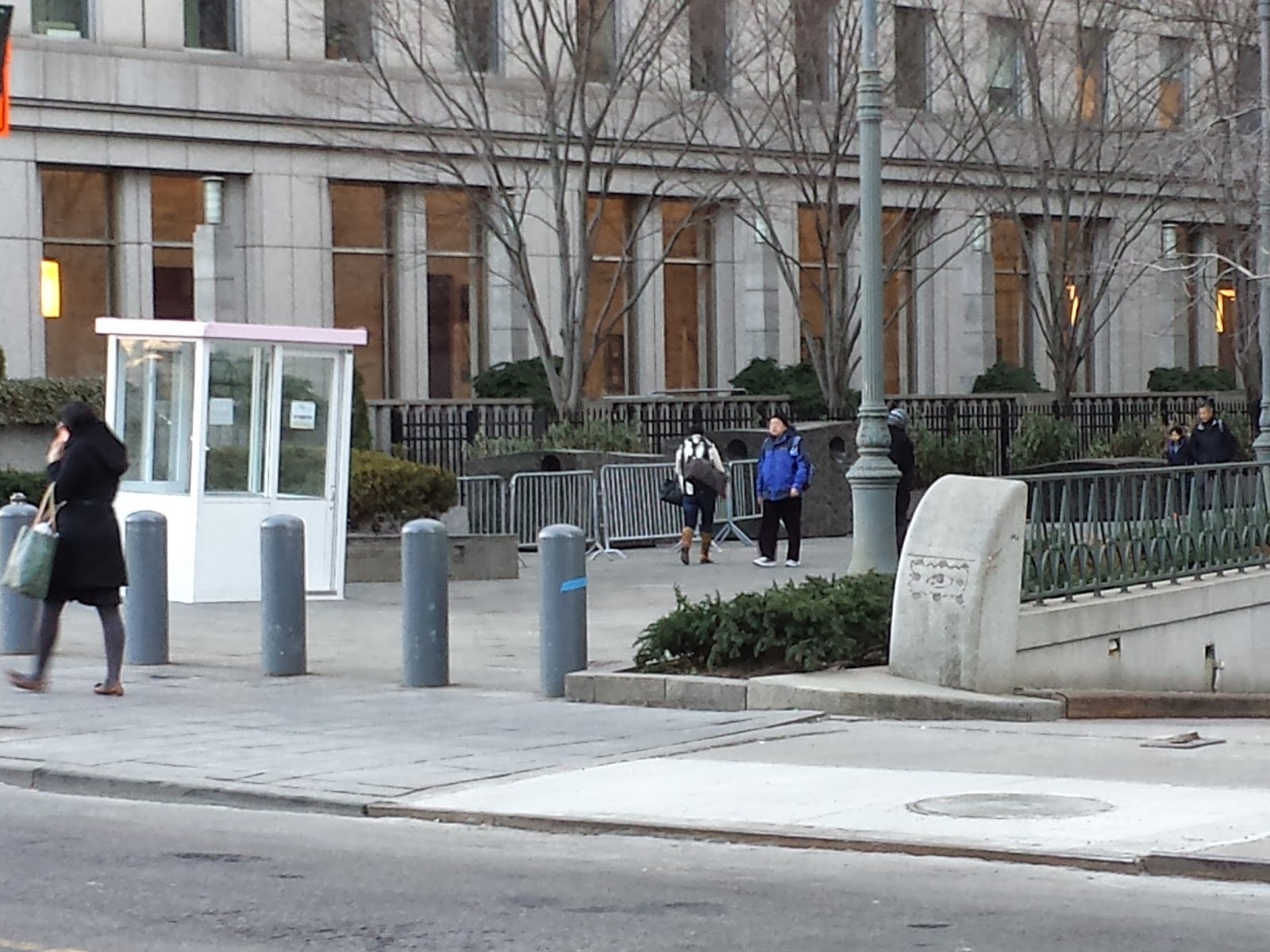 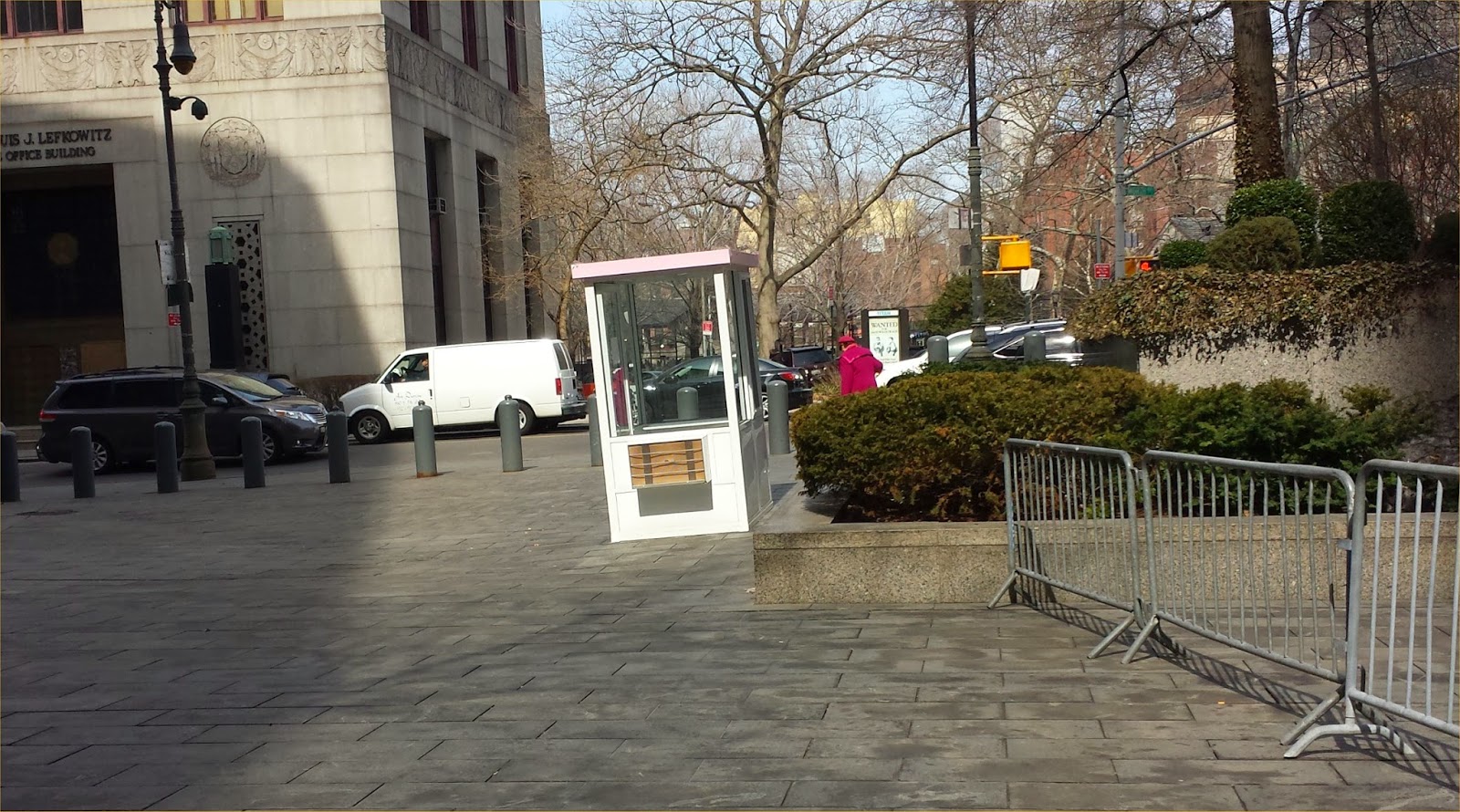 We can't help but think that the appearance of these two guard booths (currently unmanned) signify the eventual closing of the much-used public plaza that is home to Maya Lin's sculpture installation "Sounding Stones" created in 1996 - Commissioned by the US General Services Administration's Art in Architecture Program . 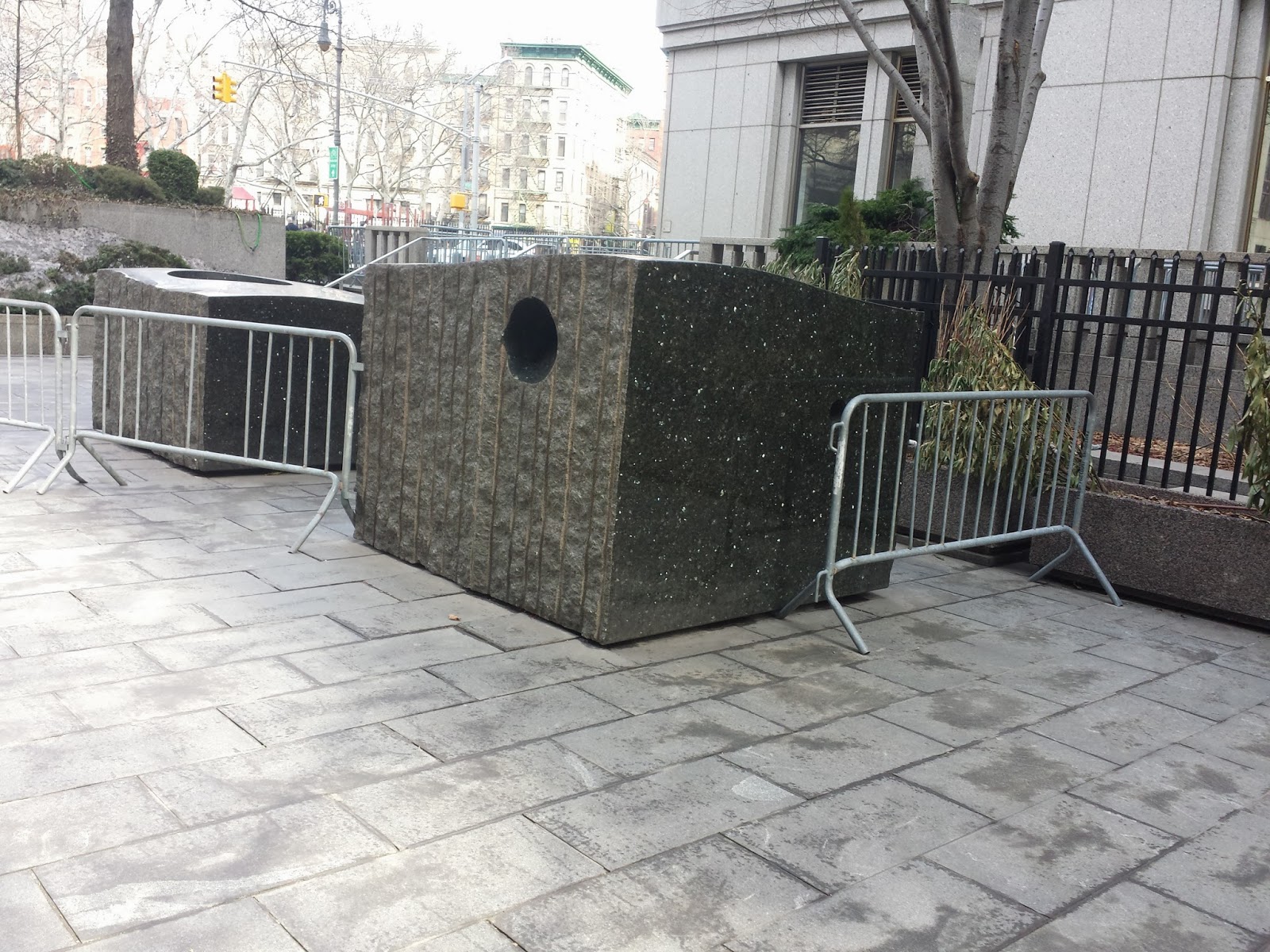 Lin says of the work  "I design works to create an intimate dialogue with the viewer, allowing a place of contemplation, sometimes an incorporation of history, always a reliance on time, memory, and a passage or journey. The relation between the viewer and the artwork does not require a knowledge of a specific language of forms, but instead relies on a direct empathetic response to the work. This experiential reading of the work, utilizing modulations in the light, sound, texture, materiality, subtle changes in height, depth, or grade, has helped define my work."

If you ever had the pleasure to experience this sculpture as it was intended, before the barricades cordoned off the area around the sculptures, you would hear a wonderful gurgling noise from fountains within each stone. It seemed fitting that Lin's sculptures enticed the participant to walk up close, place their ear next to the holes and listen intently as this is what we're expected to do in a Court of law. Ironic then, that the whole auditory experience is removed from this piece by the placement of barricades, not to mention the obvious visual message that "security" trumps art in the eyes of Homeland Security.

How much do we have to give up in the name of "security"? To that extent just how effective are these measures anyway? Just last week a teenage boy was able to reach the top of the Freedom Tower ALONE.  A few years ago Police Headquarters was the sight of a mugging under non-functioning surveillance cameras. And in January a court officer was violently mugged on Court House property while she exited the building.

The closure of public plazas has done nothing to enhance the safety of residents and pedestrians, one can argue that in fact the lack of pedestrian activity makes the area prone to crime. 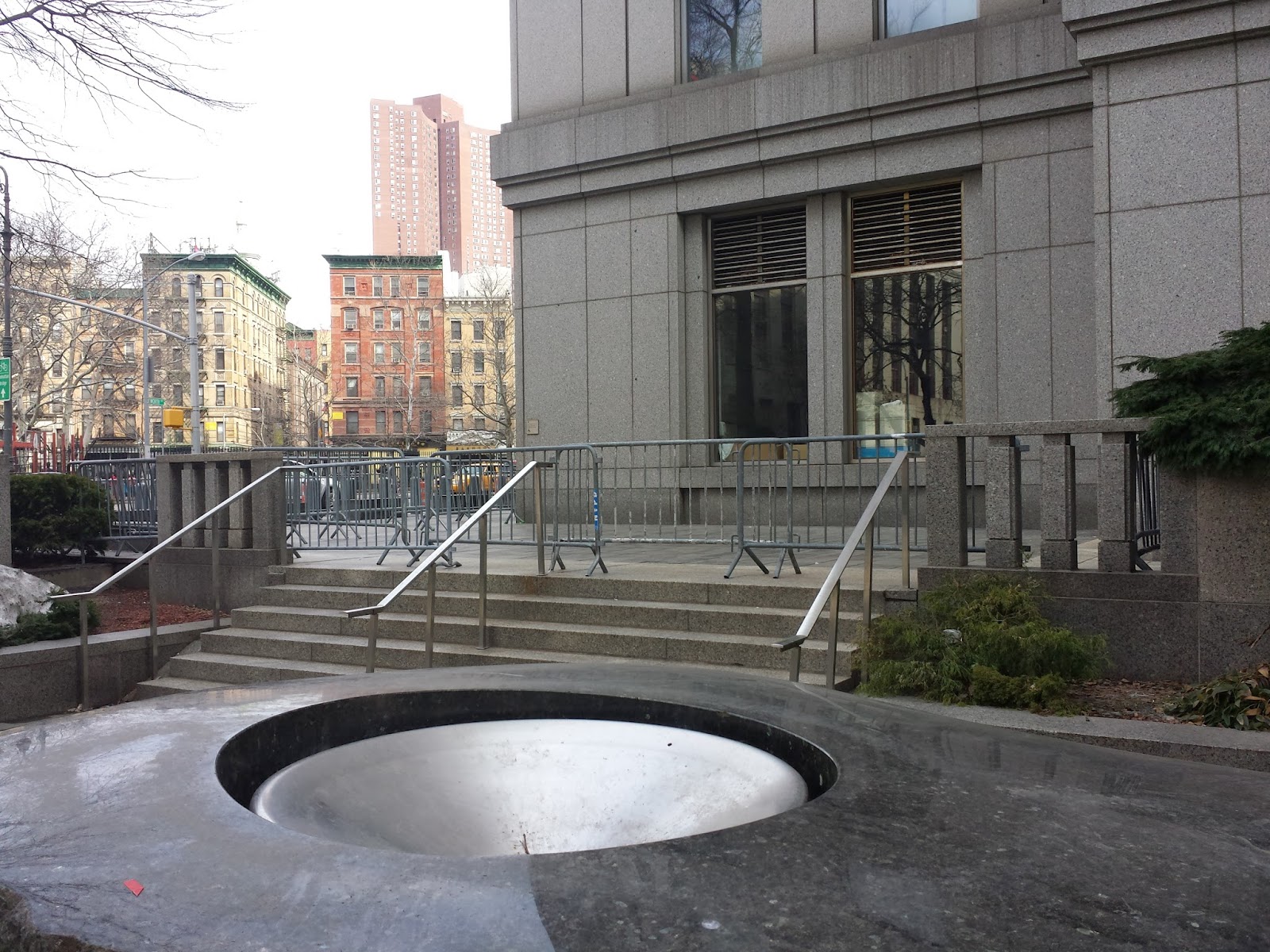 When the Moynihan Court House was first opened there were lovely benches and trees immediately to the side of the court house which were designed for the public to use. The community used these inherently peaceful plazas to do tai chi and play chess. Sadly these benches and the stone sculptures are now off limits, and perhaps the entire thoroughfare will be closed. 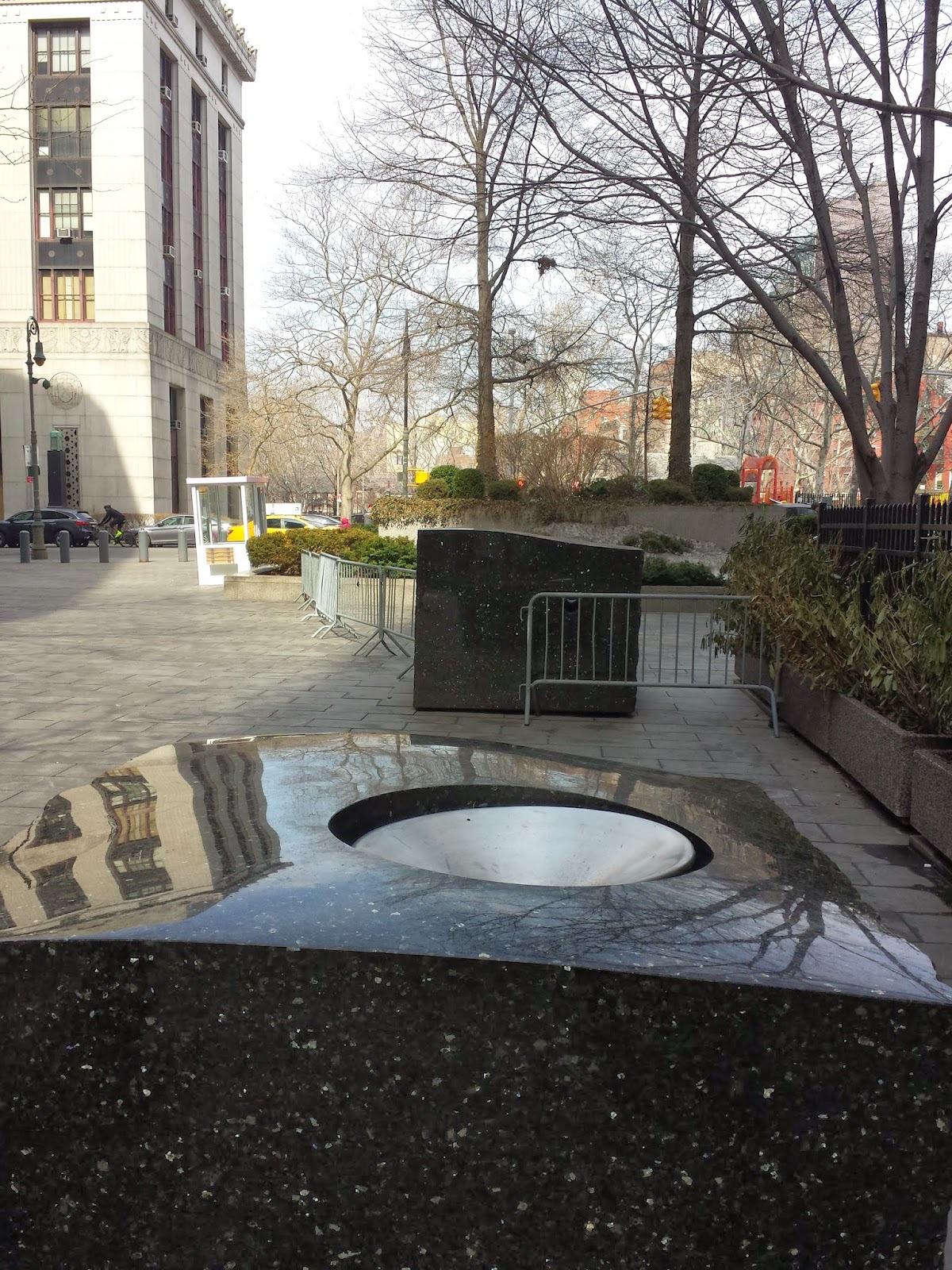 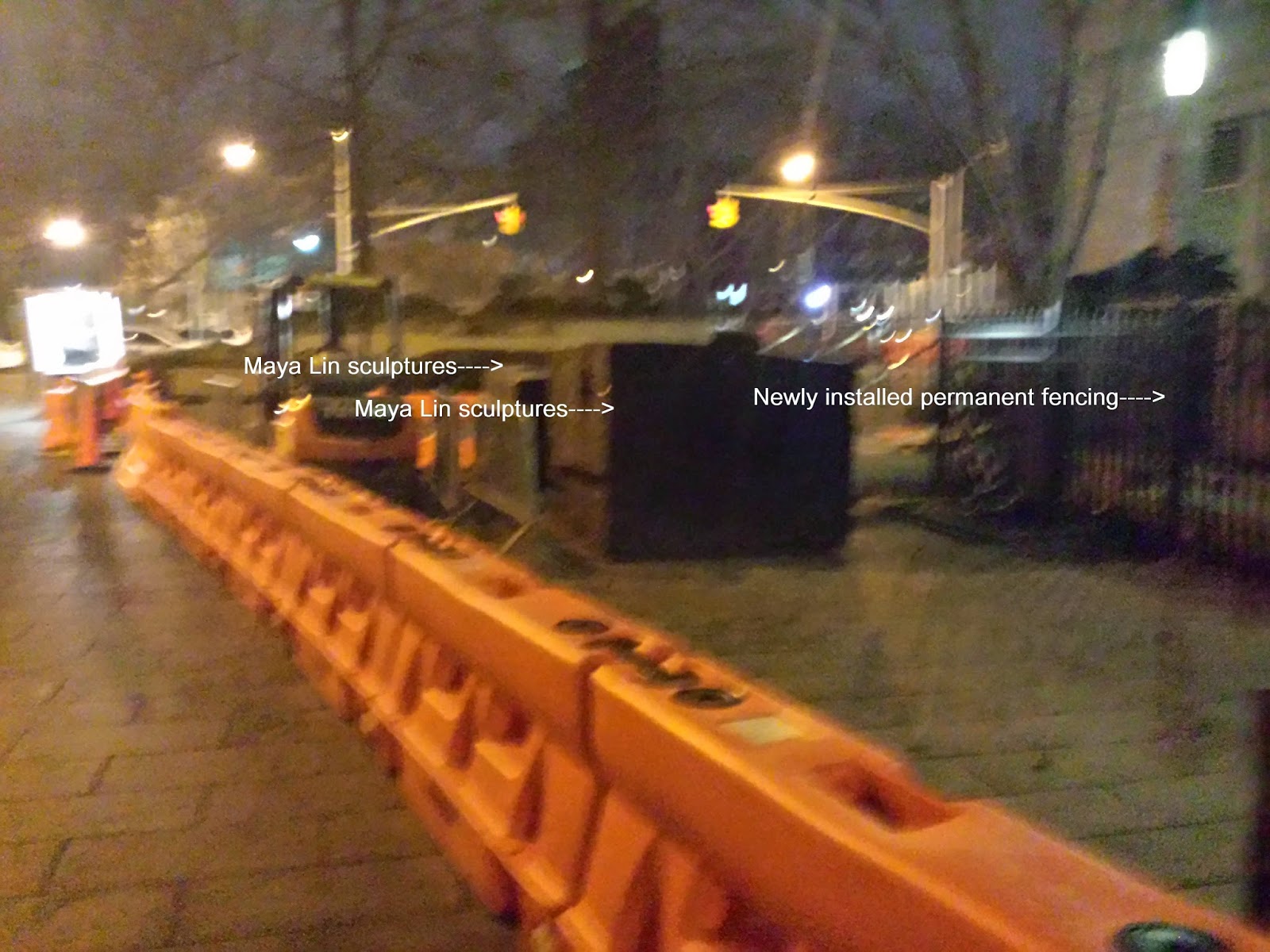 Updated April 11 2014, sculptures are now fully barricaded as are the benches, and trees.
click to enlarge photo 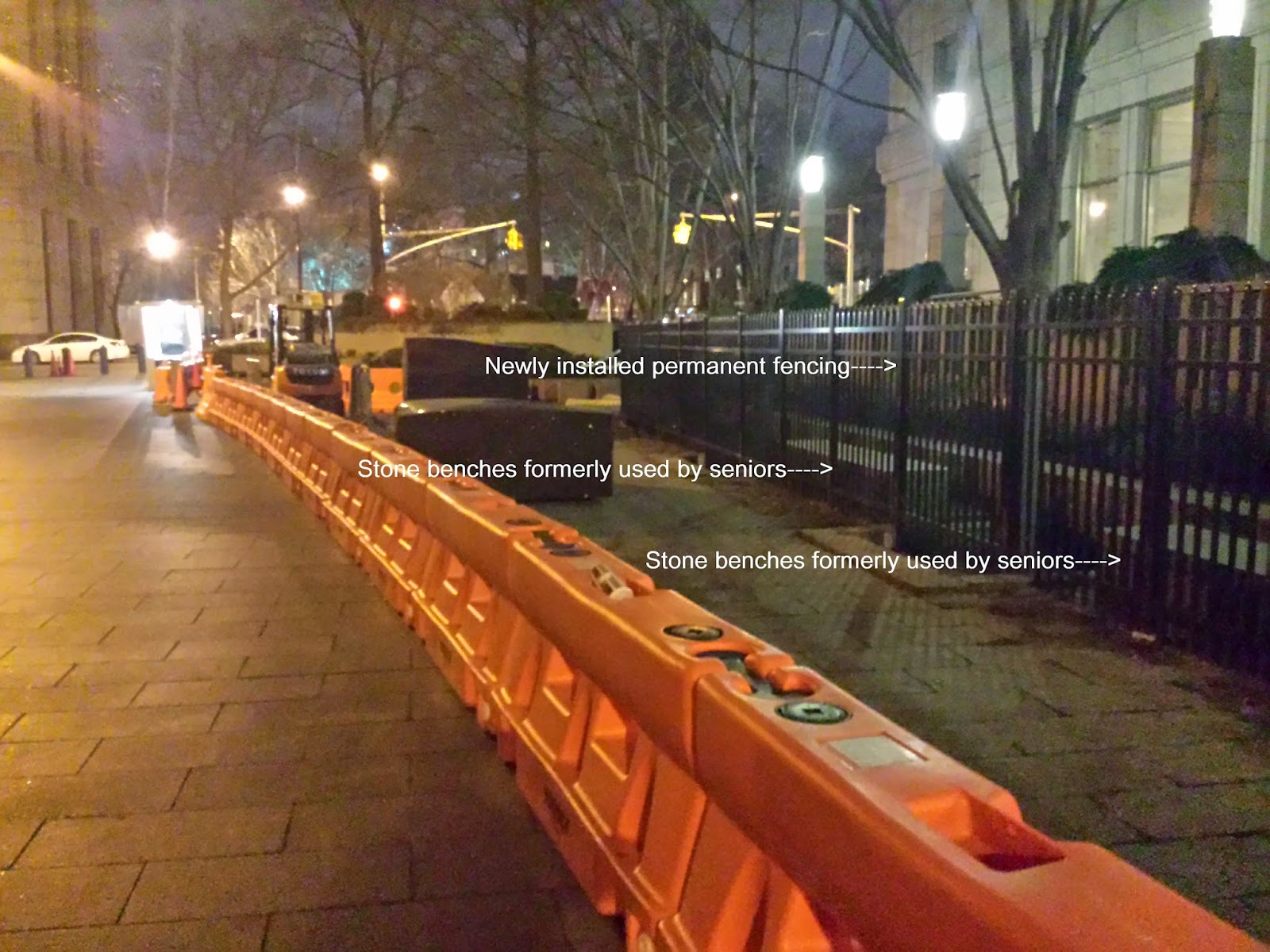 FROM THE DOWNTOWN EXPRESS NEWSPAPER March 13th 2014:
Under Cover, March 13, 2014
March 13, 2014 | Filed under: Under Cover | Posted by: admin
TERROR TRIAL
Jan Lee, one of the Chinatown community leaders who has fought against many of Lower Manhattan’s post 9/11 street closures, tells us the Downtown federal trial of Sulaiman Abu Ghaith, Osama bin Laden’s son-in-law,  doesn’t seem to have worsened the traffic problems, but it does appear to have prompted the installation of an unsightly new security booth that is so far not been operational.

The biggest problem with the booth, Lee said, is it gets in the way at the Worth St. public plaza outside the Moynihan Courthouse. He fears that the plaza may close again as it did for several years in the ‘00s, which would close a shortcut to the subways and mar Maya Lin’s sculptures, which have auditory sounds designed to be experienced up close.

Adding insult to injury, Lee said, the booth is the “cheapest-looking, Home Depot piece of [crap].” 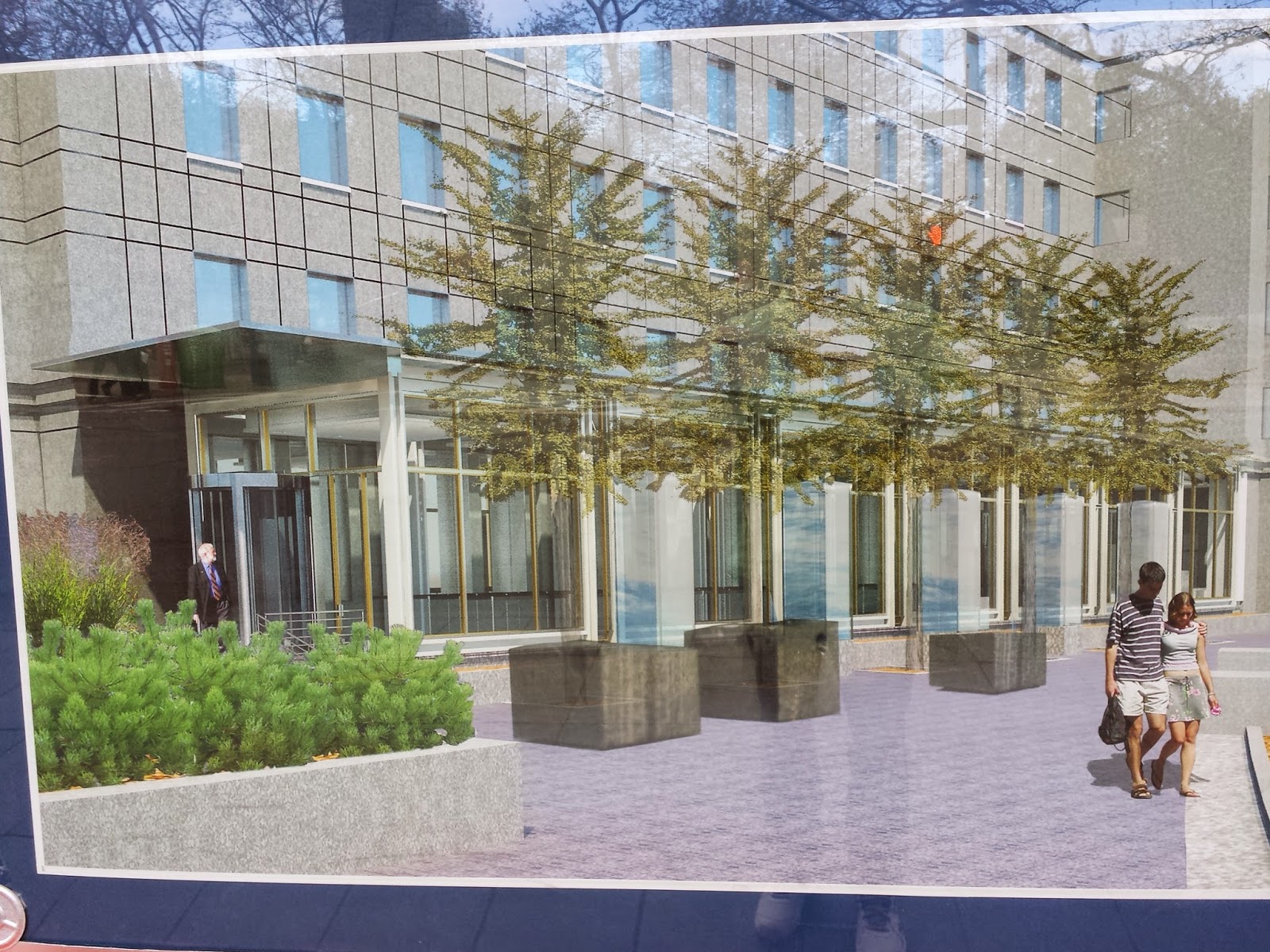 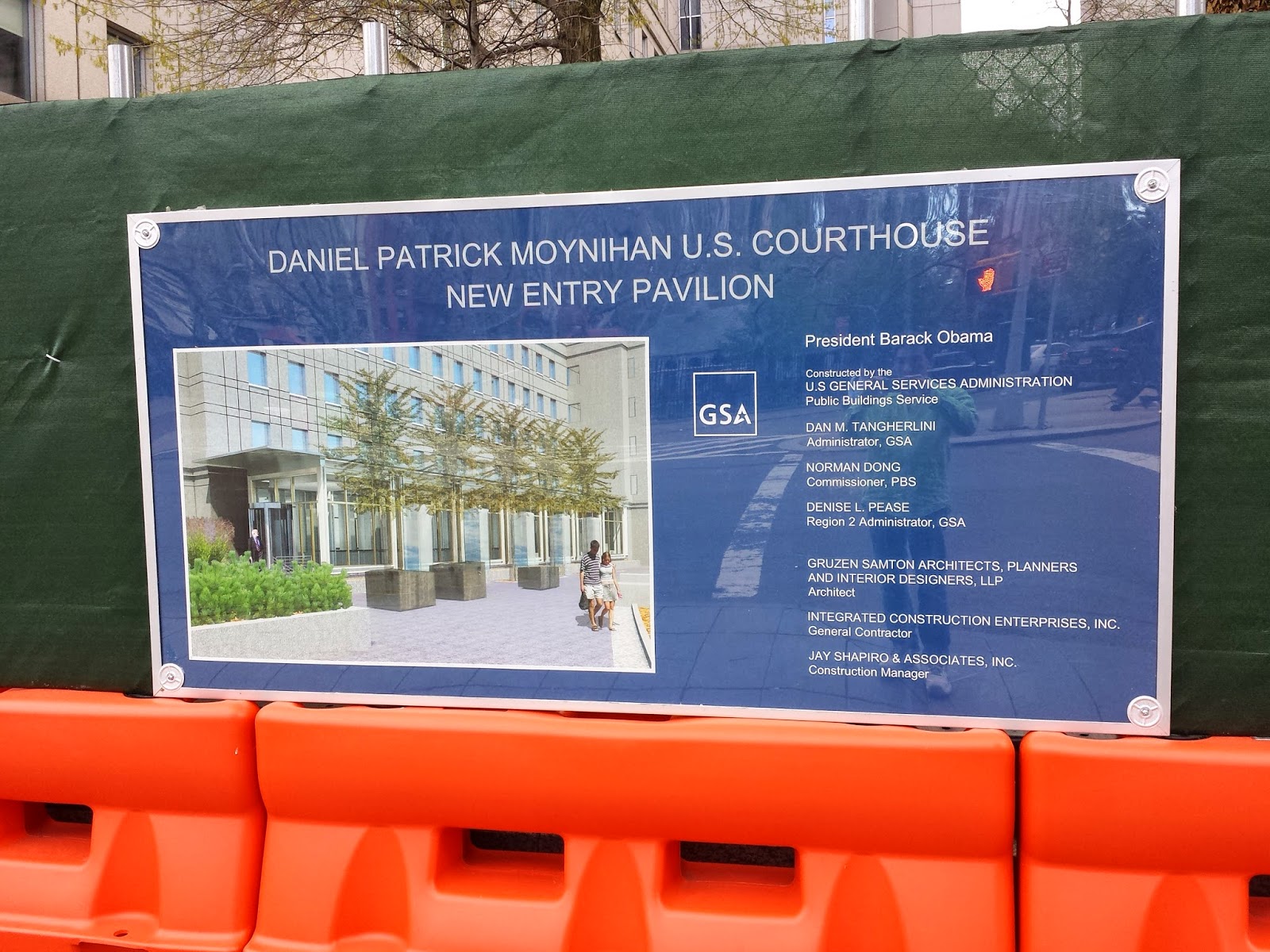 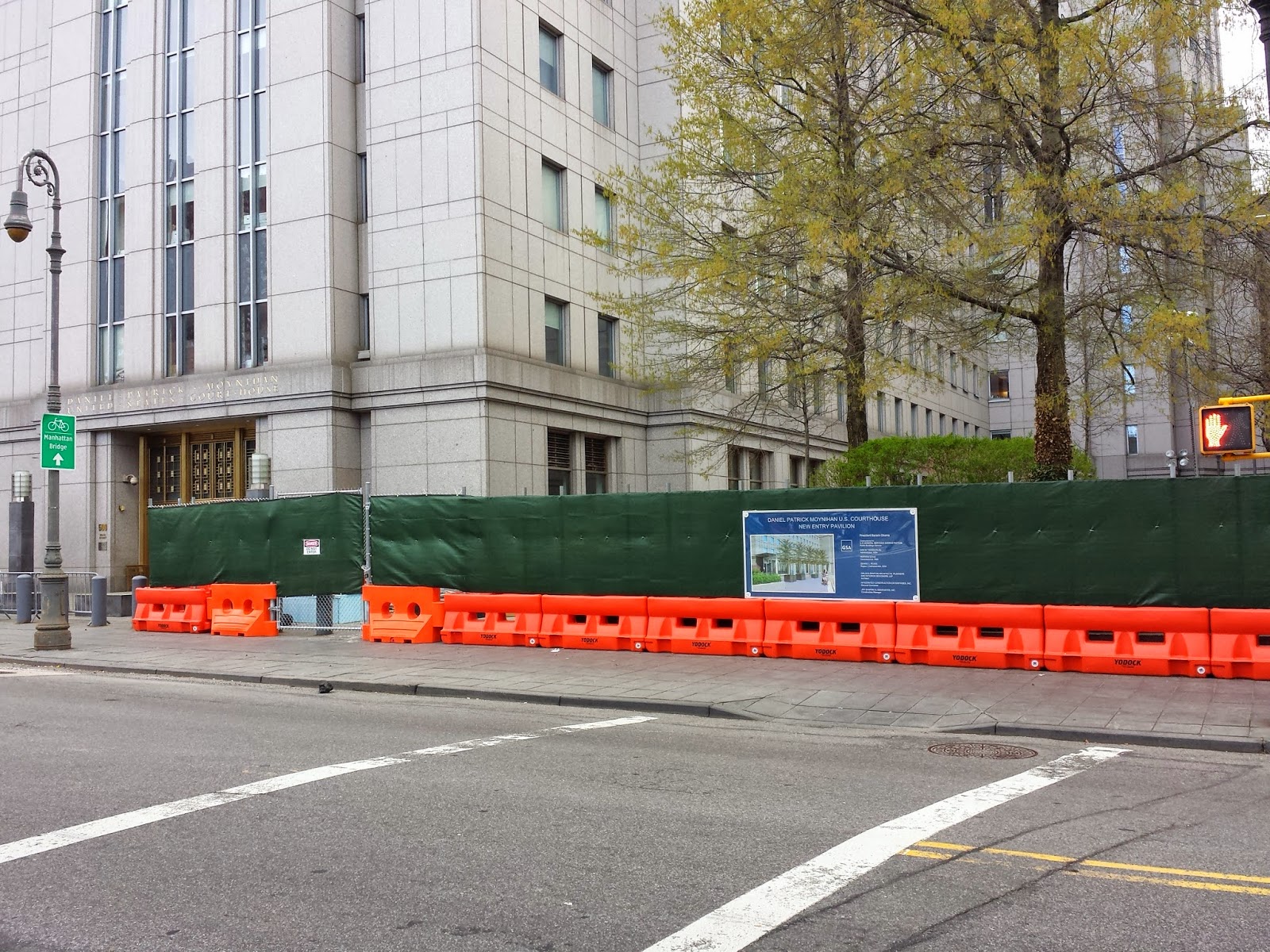 Posted by Watchdog at 4:18 PM No comments: