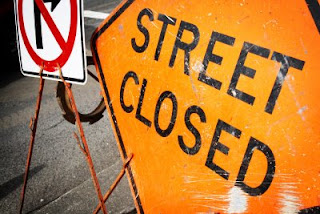 Worse, it is a sign of what’s in store for many others down the road.

The utility upgrade and street repair work, along the five blocks between Canal and Hubert Streets, is part of a two-year project that also includes sections of Leonard and Harrison Streets. In addition, a separate water main replacement is planned next summer for Hudson Street between Hubert and Laight Streets and including work on Hubert, North Moore, Beach and Franklin Streets.

The Greenwich Street project is slated to continue into the summer of next year. Already it is two months behind schedule due to the removal of the contractor, Felix Construction, for “integrity issues,” according to Matthew Monahan, spokesman for the city’s Department of Design and Construction, the agency in charge of the project.

For those living and working near the street work, the disruption seems to be without end.

As early as 6:30 a.m., the sound of iron plates dropping onto the roadway is a harsh prelude to the cacophony of drills, chainsaws and clanging machinery that fills nearby apartments the rest of the day. Utility shutoffs have left apartments and restaurants without water on four separate days—so far—and without gas during two bone-chilling days in February. Nearby parking has all but vanished, as available spots are occupied with construction equipment during off hours and workers’ vehicles during the day.

“Every neighbor, from here down to Hubert Street, is going to go through this exact same story,” said Jim Conley, as the steady sound of a backhoe’s diesel engine roared beneath his window at 130 Watts St. “If they don’t get a better system in place going forward, it’s going to be a whole lot more of what we’re going through.”

One day last month, residents of Conley’s building discovered their basement flooded with more than a foot of water, damaging or ruining the contents of storage lockers there. Jordan Kurzweil, another resident of the building, rattled off a list of damaged or destroyed possessions now residing in a communal heap in the basement hallway.

“Stereo equipment, artwork, mid-century furniture, my high school yearbook, about 1,000 photos,” he said. “My kids’ toys, my CD collection; there was a lot in there.”

The basement of a second building, 472 Greenwich Street, was also flooded. Marcy Brafman, the co-op president, said water has been seeping into the basement since the project began. She worries about mold and mildew taking root in the building’s foundation and, like her neighbors, does not know if they will be reimbursed by the city.

“I find it hard to believe that it couldn’t have been avoided or foreseen,” Brafman said. “The city should not be putting us through this. We’re not complainers, but there’s an issue of health and safety here.”

For the past five months, business owners have also contended with dust, debris and shrieking construction equipment. Gary Latawiec, owner of the Spa of Tranquility, said that trying to run a relaxation center near the work site—especially one with “tranquility” in its name—has turned into “a contradiction.” He estimated he has lost more than $45,000 since the project began. After the first few weeks, he stopped asking customers to pay for massages and other services if their sessions were pierced by the racket of jackhammers or chainsaws. When utilities are shut off, his employees cannot give pedicures or facial treatments. Latawiec said his business was hit especially hard during the normally lucrative Tribeca Film Festival.

“People saw all that, they saw the orange fences, and they’d turn around,” he said. “They wouldn’t bother coming up the block.”

“It’s a nightmare,” said Stacey Sosa, owner of Estancia 460, the restaurant next door. “I’m a destination spot, so people come but they see all the barriers and everything, then they decide they’re going to go someplace else.”

On May 21, she and the other business owners on the block were notified that the water would be shut off—for the fourth time—the following day. Her staff would later spend much of the evening filling water jugs and buying bottled water at a nearby grocery in preparation.

“Coupled with the economic downturn,” she said, “it’s another thing I didn’t need.”
Posted by Watchdog at 12:18 AM