Where'd the "Shoe Guy" go? aka: Bloomberg's determined to bring the suburban experience to Chinatown. 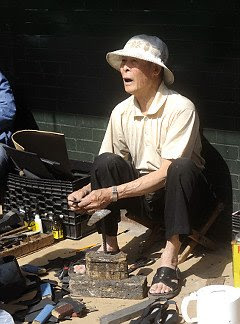 From the Daily News:
Searching for the elusive Shoe Guy in Chinatown


Where did the Shoe Guy go?

"Ask the Watch Guy," says a worker in Chinatown's Columbus Park, which for years and years was ringed with fortune-tellers and repairmen plying their crafts, until police ousted them a while back.

Found him. The Watch Guy, who fixes timepieces people in other parts of the city throw away, was on Bayard St., hiding behind a tree near his old prime spot near Mulberry.

He used to work side by side with the old cobbler, who'd fix the heels of assistant district attorneys sitting sheepishly in their socks.

"Police evict everybody," whispered a fortune-teller who looked around nervously as she read a customer's future from a picture card. "They say sidewalk too crowded."

Imagine that: a crowded street in Chinatown!

Who's going to go next - the ladies smoking under their parasols? The circles of men who bet on Chinese chess? Or the brass band that plays funerals, New Orleans-style, right down the block?

They're treating the craftsmen like the criminals who once ruled Five Points, where Columbus Park sits.

"That, I don't know," said Wee Wong of the Chinese Benevolent Association.

"I am not aware of this," said Susan Stetzer, district manager of Community Board 3.

Off we went, squeezing past deliverymen pushing handcarts, girls sipping from coconuts, florists weaving carnations, the singing dolls and 25-cent toy elephant rides, and there he was - at Elizabeth and Grand - the Shoe Guy.

A line of customers who'd tracked him to this spot stood with their worn and broken shoes - because who can afford to keep buying new?

Zhong Wen Qiang effortlessly sewed a leather sole - his feet bare and the tools of his trade in wood tackle boxes around him.

"The government evicted him, and we don't know why," said Zhong's daughter Sally, a sidewalk beauty under a skyblue Easter hat, who tinkered with her father.

"The police say Big Boss told them, but we don't know who he is. They tell us we have to rent a store and get a license."

Watch Guy snuck back to the more prime location of the park, she's told.

"Police just keep evicting him," she said. At 73, her dad's too old for that.

Police Inspector Gin Yee said Shoe Guy "needs to get a general vendor's license. We had community meetings about this. He had ample warning.

"Everybody else has to get a license, and so does he."

The good news is Zhong does not have to rent a storefront to get a general vendor's license, and it's only 100 bucks, Consumer Affairs Department spokeswoman Beth Miller said.

Mayor Bloomberg wants to keep the flavor of the city's neighborhoods, so maybe he and his commissioner can grandfather this grandfather in.

At least they should go watch him make old shoes look new.

And gentlemen, bring your wingtips.

jmolloy@nydailynews.com
Posted by Watchdog at 2:22 AM