What do snake oil salesmen and the Dept. of Transportation have in common? 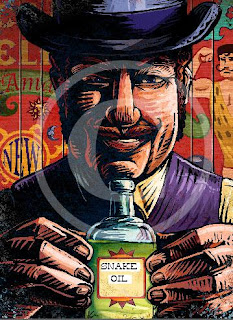 When a snake oil salesmen tells you he knows what's good for you, be wary.
When the D.O.T. tells you they are trying out a "pilot program,"  "a trial period", or based on statistics they "will make adjustments" -- don't believe them.

“As a temporary treatment in a temporary period, I think the chairs do match the atmosphere of the new space, and they reflect the fact that it’s an unofficial kickoff for summer,” said Janette Sadik-Khan, the city’s transportation commissioner. But, she added, “The plan all along is to bring in world-class treatment, and we’ve ordered hundreds of new chairs and tables and umbrellas.”
————————————————————————-

Let me get this straight. At the end of the “trial” the DOT is going to carefully analyze the results to see if the traffic diversion works - but they’ve *already* ordered permanent chairs. Umbrellas too. The pink flamingos will arrive next summer.

Yes, I feel quite confident that Khan’s DOT is keeping an open mind about this.

Community Board 3 formed the Chatham Square Task Force of Community Board 3 - a hastily cobbled group of community activists, stake holders and CB members to address the detailed plans of Chatham Square and come up with some alternative plans with the hopes that community input would be realized through a resolution.
All along the Dept. of Transporation told CB3 and the Chinatown community at large that the deadline for construction was imminent and unchangeable. In reality, the "deadline" was nonexistent and the D.O.T. knew it since they never sent out the bids to construction companies as they said they had back in January, thus setting the entire project back indefinitely. Meanwhile hundreds of hours of analysis by volunteers and community board members as well as a professional traffic engineer (working on funds provided by the Community Board's transportation related American Red Cross grant) was pulled together with the idea that bulldozers were making their way to Chatham Square with a start date of "early July". The convenient excuse for the refusal to entertain logical and practical Task Force solutions to ludicrous and unproven, untested D.O.T. plans was the lack of time necessary to analyze the community plans. Now we know that was a lie.

How can The Department Of Transportation and its Commissioner Sadik Khan expect anyone in New York to believe them after they repeatedly deceive communities this way?  The Bloomberg administration, Sadik Khan and the sheep-followers they brainwash are herded into "plazas" and work in consort to persuade the rest of us to "just believe" that their plans for our City will work.

As Councilman John Liu rightfully points out "where is the accountability"  and where is the transparency in the D.O.T.?
Posted by Watchdog at 1:10 AM