Breaking News - Chatham Square Reconstruction put on hold for at least a year. 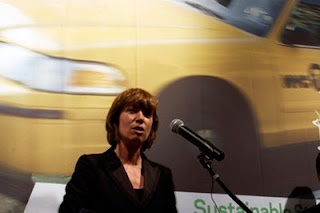 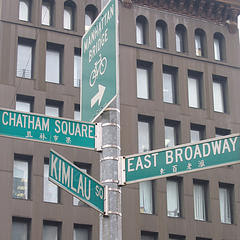 A CCRC tipster reports today that the D.O.T. Commish had a meeting with the Chinatown Consolidated Benevolent Association board of directors Wednesday to announce that the Chatham Square reconstruction will be delayed for a year. It was noted that no media were invited to attend this meeting.
The D.O.T. stated at the meeting that the reason for the delay was that the D.O.T. had not yet sent out the bids to contractors for the reconstruction, even though at numerous public presentations they claimed bids went out in January of 2009. CCRC was told that the contract review process would be finalized in June of 09, with construction started on the first phase of the project, the water main replacement, in July 09.
Sources tell CCRC that no government contracts have been signed for Chatham Square so it is unlikely that the water main project will start, much less the total reconstruction and reconfiguration.
It is no mistake that the bids were never sent out to contractors because this is, after all a Mayoral election year. Mayor Bloomberg floated many balloons in the area during the last several years trying to access the popularity of such a major undertaking designed to permanently close Park Row. He tried unsuccessfully to strong arm the Chinatown community into swallowing a thinly veiled ploy to keep Park Row from reopening to appease the NYPD Commish.
Continued bad press, protests, press conferences, and exposure on the Park Row and Chatham Square issues finally kept the construction bids from ever seeing the light of day.
It's clear that they Mayor was hedging his bets on whether the pressure would last, why else would he hold up the bidding process? Knowing the project would be met with thousands of protesters as the bulldozers moved into Chatham Square he sensed his ever dwindling popularity slipping further into the abyss.
Perhaps it was seeing his rival, Comptroller Thompson, at the LMDC headquarters supporting CCRC in their plea for the LMDC board to stop all funding for Chatham Square that was the final straw. Public Advocate candidate Norman Siegel would prove a formidable force if elected and seeing him supporting Chinatown on this issue probably didn't sit well either.
The only SURE way to keep the D.O.T.'s plans for Chatham Square from moving forward is to vote Mayor Bloomberg OUT OF OFFICE.
CCRC will continue to lobby the LMDC for an opportunity to present the community alternative plans for Chatham Square.
The year long delay will be an opportunity for the rest of NYC and City Council, and D.O.T. to examine the merits of the community plan.

UPDATE: This blog posting has been listed on numerous community blogs throughout lower Manhattan, including www.curbed.com (which receives 2 million hits per month).
Posted by Watchdog at 3:27 AM