Brooklyn Merchants Oppose the BID they are in. 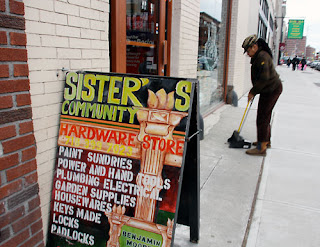 Atchudta Barkr, owner of Sisters Community Hardware at the corner of Fulton Street and Washington Avenue, says she doesn’t need a business improvement district to do her sweeping.

Fulton Street merchants launched another assault on Thursday against a tax on property owners that would be allocated to improve the business environment along the thoroughfare in Fort Greene and Clinton Hill.

Small business owners and neighborhood activists, mostly from the Clinton Hill-side of Fulton Street, delivered a letter of protest with 70 signatures against the newly formed business improvement district to Councilwoman Letitia James (D–Clinton Hill) and the city Department of Finance in the morning, warning that they’d withhold their fees from the controversial measure.

“We won’t pay,” the letter read. “This BID [business improvement district] has left us out. We want a new, democratic vote. Otherwise it’s a battle on Fulton Street.”

Shopkeepers first revolted against the business improvement district prior to its creation in December, but the rebel forces were not large enough to defeat the vote by the 200 property owners to ratify the tax. The opponents have kept up the fight, though, saying that the tax, $80 for every 20 feet of property, is a burden during the recession.

The tax will raise $300,000 per year and its proponents say the money will be spent on security, street lighting and other enhancements between Rockwell Place and Classon Avenue.

But there’s the fear among some entrepreneurs that it will accelerate gentrification and eventually drive them out of business.

James has defended the business improvement district and said that its formation now enables her to funnel city money to the area for other uses that could revitalize the commercial corridor.

Myrtle Avenue has a business improvement district, which has been credited with diversifying the stores along the strip once known as “Murder Avenue.”

The 88th Precinct played a large role in the turnaround, others say.