Terror Trials in NYC - "not off the table" Gibbs, Dep. Attorney General 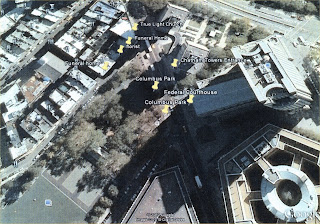 Pro-Terror Trial Proponents Still Don't "Get It"
Pro-Terror Trial Proponents still don't "get" the uproar over holding the terror trials "Out of Our Living Room Windows" (OOLRW) just yards away.  This is not a case of "Nimbyism," this is a case of life or death for a community that has already suffered nine years of devastation and disruption to lives and commerce. The area near the courthouse has still not fully recovered. The nearby World Trade Center is still under reconstruction.  If the terror trials are held here, we would live in "an armed camp" for three years or more.
We are grateful to our Community Board #1 leaders, city, state and federal elected officials, Police Commissioner Kelly and Mayor Bloomberg for reexamining and supporting the move of the terror trials out of New York City.  Here is why the terror trials must go --
Debunking some Inconvenient Truths
We have sponsored terror trials at our Federal Courts before and we can do it again

The U.S. Federal Detention Center has an underground tunnel to safely transport the terrorists to the U.S. Federal Courthouse and therefore is the ideal place for the trials

We’ll hold the terror trials here if we are compensated by the federal government
Police Commissioner Ray Kelly and Mayor Bloomberg have said they were not consulted before the terror trials announcement.  Both have given escalating cost estimates to our federal government.  We fear this is a “rain dance” for a magic number.  Mayor Bloomberg now estimates the cost to be almost a billion dollars over four years.  Is this the best use of taxpayer dollars in a recession?  Remember Bin Laden's broadcast in 2004:  "We are continuing this policy in bleeding America to the point of bankruptcy....Every dollar of Al Qaeda defeated a million dollars, by the permission of Allah, besides the loss of a huge number of jobs."  Holding the terror trials in New York City is a bad idea at any cost.
MOVE THE TERROR TRIALS FROM NEW YORK CITY!
CIVIC CENTER RESIDENTS COALITION
Posted by Watchdog at 1:19 PM