Civic Center Residents Coalition and neighbors of the terror trial Moynihan Courthouse - send their message to Dept. Of Justice and President Obama - MOVE THESE TERROR TRIALS 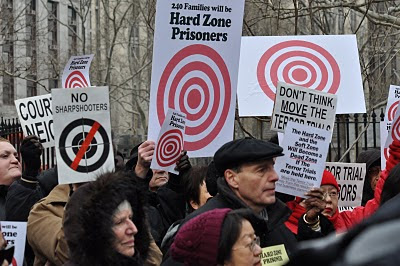 "hard zone prisoners" if the terror trials move in NEXT DOOR.

over 50 residents of Chinatown and the Civic Center - next door neighbors of the U.S. Federal court house -- where the Department of Justice and Attorney General Eric Holder proposed to have the terrorist trials, protested loudly and declared "MOVE THESE TRIALS" 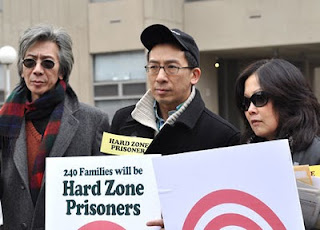 Geoff Lee (left) says "so long as placard parking exists we're unprotected, remember the white van at Times Square? That was left alone for two days because it had a fake placard, Chinatown is inundated with the same problem already".

The Civic Center Residents Coalition believes the 9/11 terror trials should "not be held in anyone's backyard" - having lived through the post 9/11 street closures/lockdowns/checkpoints that thousands still live with today, residents rally to move the terror trials.
The decision to move dangerous 9/11 terrorists from Guantanamo Bay, Cuba, to Worth Street for trial was not carefully thought out and lacked comprehensive evaluation of the logistics, failed to consult with local authorities and communities, vastly underestimated the security costs that could easily exceed $1 billion and overlooks the human toll on courthouse neighbors. Holding the terror trials in the city must be “taken off the table” immediately. 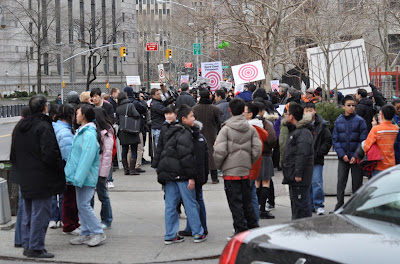 Political ideologues identify us as suffering from a case of “nimby (not in my back yard).” We suffer from “oimby” (only in my back yard). Since 2001 we are the only post 9/11 community in Manhattan still suffering from the “chokehold” of massive street shutdowns, security checkpoints, rerouting of traffic and bus routes, invasive government permit parking abuse requiring an NYPD internal affairs crackdown, takeaway of parks that were returnedonly after lawsuits, bomb sniffing dogs on our street corner and clanging barricades under our windows. 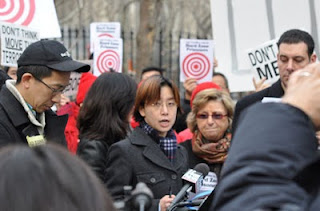 Patricia Tsia , executive representative of Lin Sing Association, 110 year old family organization with deep roots in the Chinatown community at 47 Mott street.
We are the only residential community now faced with having our neighborhood imprisoned behind a “hard” and “soft” security zone. Here are a few of the intensive security measures presented by Police Commissioner Kelly last week. Our streets and air space would be patrolled for years by: 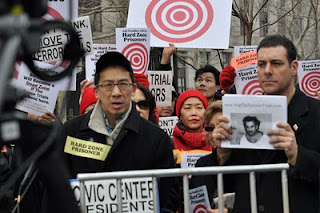 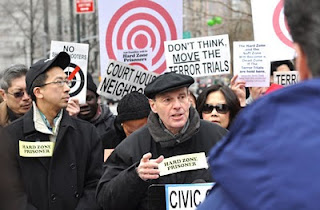 Vinnie Imbrosciano (right) - Chatham Towers resident, a neighbor of the court house where the terror trials will be held if the Dept. of Justice doesn't find a suitable alternate location.
For pedestrians inside the soft zone: 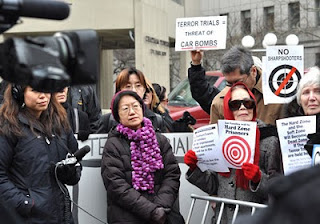 Councilperson Margaret Chin - Coauthored a resolution to permanently remove the terror trials out of her district.
The true cost of the terror trials would be borne by tens of thousands of innocent Lower Manhattan residents and hundreds of small business and property owners who would risk living in an armed camp under rooftop sharpshooters. These are people who did not bow to terrorism and chose to stay after 9/11. Ironically we are now being accused of NOT BEING TOUGH enough to “show the world” the U.S. terror trials can be held here safely – How many years would we have to live in a war zone - three, four, five? Would that be justice for all of us who live in
Lower Manhattan? 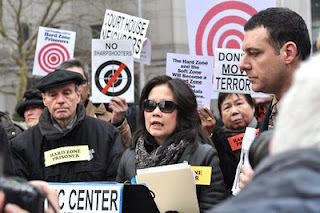 Eric Holder: Terror Trials “Off the Table” in New York City!
Posted by Watchdog at 11:04 PM