The case for Fast Fleet government car sharing is made greater every day. 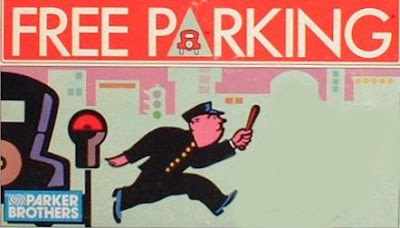 Michael Bloomberg in his first term as Mayor removed the partitions from office walls within City Hall and replaced them with glass to symbolically represent the "transparency" he would have in HIS City Hall. As we have learned from numerous reports about abuse of government owned cars, and more recently the Mayor's own S.U.V.s which until days ago would sit idling for hours, transparency is not this administration's concern, it's more about squeezing every penny from hard working NY'ers.

CCRC proposes the adoption of "Fast Fleet" car sharing for government vehicles as a solution to the abuse of public parking spaces. Had Fast Fleet , which is now used and enjoyed by Washington D.C., been in place the Seaport Report shown below may have been very different.

Fast Fleet, you see, would have allowed full transparency with regard to the time each government car had been parked, the purpose of the visit, the person who signed out the car, the agency who signed out the car, and most importantly, whether the car is being used on official business or not. After all THOSE ARE OUR CARS, our tax dollars paid for them, we maintain them, we should know how and why they are being used, and when they are abused we should have answers and solutions immediately.
This information would have been helpful in quickly identifying the precise offense and swift action would be taken against the abuser.

On the flip side, Lisa Kunst's information was obtained by a traffic agent immediately and efficiently and as a result swift action was taken against her. Shouldn't we have that "service" available to quickly and efficiently punish the government employees who routinely abuse their parking privileges?

Will Mayor Mike ever remove himself from the self imposed haze of carbon monoxide to GREEN THE FLEET? Or will he, as Deputy Mayor Ed Skyler explained, continue to provide this parking perk to government employees because he feels they are underpaid?

See Lisa's story in the Downtown Express, something tells us her story is familiar to all NY'ers. Fast Fleet can and will stop this phenomenon.

Mad As Hell, Mayor…
And we’re not going to take it anymore! That’s what many S3 residents are saying these days about the uncontrolled and outrageous takeover of our streets by city vehicles. On Friday night, one of the busiest for local restaurants and retail, Seaport Report counted more than 40 city cars in public parking spots (alternate side; metered — with placards in windows so that they did not pay parking fees) on Dover, Pearl, Water, Front, Fulton and John Sts. Most of these same cars had been in the same spots since 11 a.m. and were there when we checked throughout the weekend.

This has residents and people like Lisa Kunst, daytime manager of the Bridge Café, fuming. She drives to work daily because there is no public transportation near her house in Queens and she can’t afford the pricey parking in Downtown lots.

On Thursday, July 9, at 10:24 a.m., she walked with a handful of quarters over to Pearl St. between Peck Slip and Beekman where her car was legally parked to buy another two-hour Muni-Meter ticket. Looking up the block, Lisa was stunned. The space where she left her car was empty.

“I thought the car was stolen,” she told S.R. “Two men were hanging by the spot and told me that the car was towed five minutes earlier.”

Lisa, who has only two tickets, both scheduled for hearings, immediately called 311, which couldn’t locate her car for more than two hours. “What’s the point? I’m not even sure.” When she finally found it, she had to go to the tow pound at 38th St. and 12th Ave where 30 other people waited for their cars. While there, two people were given the wrong cars and Lisa finally got hers after 10 p.m.

Lisa cites two other examples of parking laws gone wild in S3. One is on Dover between Water and Front Sts., a span that is basically unmarked between arrowed signs pointing in opposite directions. “Every day people park there. Every day people get tickets,” she says. “The traffic agent told us that it’s a sidewalk crossing. Ridiculous! There’s no sign! And where are they crossing to? A fence?”

Plus, numerous parking spaces have been lost over the last three years because of “Construction Site No Parking” signs on Dover and Front Sts., even though construction never began.

Meanwhile on Monday, S.R. spoke with resident Tracy Spinney, who has been fighting for his right to free street parking in the Seaport for more than three years. He’s attended Community Board 1 meetings, written/talked with the First Precinct, and lobbed complaints through 311.

“I’m doing the dance now,” he said, as he waited near Pearl St. for a space to clear. “Right now there are one, two… six, seven, Toyota Prius city cars parked around me. Wait… ten, eleven, twelve. All are in public or metered spots, not special city vehicle parking. It’s just maddening. You confront them and ask why they aren’t parking in their designated lot under the F.D.R. Drive along South St. and they look at you like you’re a moron. They aren’t treating the public with courtesy, respect or even acting professionally. Mayor Bloomberg says he’s working on the problem but it’s the classic waiting game and nothing is getting done.”

Spinney suggests all S3 residents go to uncivilservants.org and post photos of parking abusive city workers and their vehicles. Maybe then the mayor will really do something about this problem.
Posted by Watchdog at 1:37 PM

Where's DOT commish Sadik-Khan and anti-parking abuse groups like Transportation Alternatives when you need them? Fast Fleet Zip car technology has been adopted with good results in D.C. and is more than applicable for New York government employee commuters. New York already loses $46-million a year from lost parking meter revenue due to illegal use of parking permits on metered parking. Has Bloomberg counting the lost parking meter revenue (over $350-million during his administration) to date? - and he wants another 4 years? That will be $176-million more the NYC will lose in parking meter revenue! Hah!