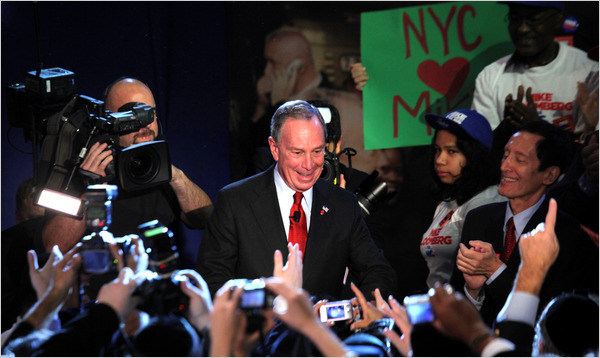 By MICHAEL POWELL and JULIE BOSMAN


New Yorkers Have Their Say

Ninety million dollars and a near-constant loop of negative commercials about his opponent later, the mayor ended election night in possession of a surprisingly modest margin of victory — far narrower than pollsters had predicted and with 100,000 fewer votes than he won in 2005. This could have profound implications for the tenor of a third Bloomberg term, not least that it is likely to hinder the mayor’s well-honed ability to cow Democrats and liberal interest groups.
“You’re going to see Democrats lining up to run in 2013, and they’ll start next week,” said George Arzt, a longtime campaign consultant who generally works for Democrats. “For a mayor who is very confident in himself, this is an earthquake.”
The mayor often seems most comfortable working leader to leader, cultivating black ministers, community board leaders and the like. He communicates with the broader public largely from an arm’s length — with expensive television campaigns, handsome Web sites and the 311 community-service system. What perhaps was missing all along, and what will be his challenge now, is to find a more tactile, emotional connection with New Yorkers.
“It’s not a vote of repudiation; it’s a vote of no confidence,” said Fred Siegel, a history professor at the Cooper Unionand a longtime chronicler of urban America. “A lot of people are going to think twice before showing him deference.”
William C. Thompson Jr., the city comptroller, showed little deference Tuesday night, offering a concession speech that was something of a celebration. “Thank you, New York,” he told his supporters. “Your support, your enthusiasm and your desire for change is what carried me to this point.”
Mr. Bloomberg already was facing a third term saddled with a $5 billion deficit, and inevitable lame-duck status.
Now, given his huge financial advantage in the campaign, he will have to confront the question of whether his five-point margin offers a different mandate: to change his governing style.
For all the talk of a post-racial, post-class city, Mr. Bloomberg gained a third term heavily dependent on the votes of white, middle-class and wealthy voters. Twenty-three percent of Tuesday’s voters were black, and 73 percent of them voted for the Democrat, Mr. Thompson, according to exit polls conducted by Edison Research. Almost half the city’s voters are white, and two-thirds of them voted for Mr. Bloomberg. Seventy-two percent of the voters making $200,000 or more voted for the mayor; 54 percent of those whose incomes fell under $50,000 voted for the Democrat.
Election Day interviews highlighted this divide. Voter after voter who had, in past years, voted for this billionaire mayor, voiced a sense that a once-admired politician had grown more distant and tetchy, and too filled with self-regard.
It is, in part, the curse of the third term; New Yorkers tend to tire of their politicians, from Edward Koch to Mario Cuomo.
“I campaigned for Bloomberg eight years ago,” said David Gibson, 60, a computer worker. “But he changed because of a strange personality shift that took place. He went from being loveable, likeable and amiable to a guy who comes out very defensive and intolerant.”
All of which speaks to an enduring and now urgent challenge for this mayor. His marriage with the voters ever has been a touch chilly. In past elections, the romance of his money and competence was enough to help him carry working-class, heavily minority districts. But he appears to have lost many of those neighborhoods Tuesday.
Councilman James Sanders, who represents a predominantly black area of southeast Queens, was one of a number of black officials to endorse Mr. Bloomberg in 2005. This time, with some reluctance, he went for Mr. Thompson.
“There was this imperial attitude, a prerogative that he favors the rich,” Mr. Sanders said. “ And term limits stuck like a bone in the throats of many out here. They’re hurting: foreclosures, taxes, and they don’t like his attitude.”
As Kenneth Sherrill, a professor of political science at Hunter College noted: “Bloomberg, for better or for worse, is not a charismatic figure. So he didn’t have passionate supporters. But he may have had passionate opponents.”
The unanswered question for many Tuesday night was what might have happened had Mr. Bloomberg faced a more forceful challenger. “If Thompson had run a moderately competent campaign, and created a real narrative for himself, he might be mayor,” Mr. Siegel said.
In the end, though, the question circles back to the mayor, whose commercials ran on every channel at every hour, whose advertisements appeared in every ethnic newspaper. At some point, for many voters, too much may have become too much.
In recent weeks, Mayor Bloomberg tended to dismiss questions about his expected margin of victory — would it be 10 percentage points? Fifteen, maybe? — with a wave of the hand.
Two weeks after the election, he said recently, no one will remember the result. The question now might be turned on the mayor: Will he remember this result in two weeks, not to mention two years? And how might that shape a new mayoralty?