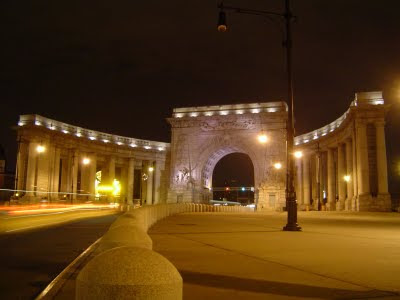 
There is strong objection in the Chinatown community to the Manhattan Bridge Centennial Celebration which kicks off this Sunday, October 4, 2009 including some of the families of the victims who have been killed or injured there. We've lost count but believe there were 4 or 5 fatalities last year alone. In the shadow of the celebrations stands a lone white "ghost bike" a reminder of a young person killed while riding at that very location.
The city is celebrating a site where there have been decades of deaths in the community with the DOT to this day refusing to post signage slowing down traffic exiting from the bridge and alerting drivers of their passage through a thriving residential area.

Although community leaders have met with previous Lower Manhattan DOT commissioners, particularly after one series of traffic accidents on the Bowery near the Manhattan Bridge several years ago and expressed our deep concerns and cited its reputation as one of the city's "traffic hotspots". The commissioner said he would take a while to study the problem (one year) and came back with no signage. .


The DOT is hell bent on speeding traffic to the Holland Tunnel especially after the installation of the Verrazano Bridge tolls. To avoid paying high fees -- drivers unnecessarily drive into Manhattan dramatically increasing traffic congestion. One CCRC member's whose memory stretches back to the 1960s recalls her mother's co-worker's daughter's death while trying to cross Canal at Elizabeth Street after school on her way to her mother's garment factory job. Nothing has changed.

The Canal Area Transportation Study or CATS I and CATS II studied Canal Street traffic as part of a regional plan that started about 8 years ago with no end in sight. It's ideas, some that were laudable, have yet to be enacted. A study succeeds because it is followed by corrective action. Otherwise the failure to post just one sign, to give death a holiday, becomes yet another symbol of the bureaucratic inertia that cripples government. Do we study a problem to death so that by the time the study is over, the complainants would have moved or new people are installed in government who can in good conscience say, they are clueless about the issue. Post the damn Manhattan Bridge sign already.

One important factor that might have changed people's minds WELL in advance of this celebration is a definitive time line, and a definitive plan to once and for all FIX the problem at the Bridge. I attended Senator Squadron's rally at the Bridge supporting his attempt at getting a red light camera at the location, but many in my area are skeptical that that will ever happen. In the meantime the injuries and deaths may still occur.

community members in the past have suggested, what is known in Hong Kong as a "flyover" which is a pedestrian bridge that is elevated above the traffic zooming past the entrance to the bridge. With the idea that chinatown "needs and arch" this may be the perfect opportunity to incorporate SAFETY and a symbol into one useful fixture.


In cities in Asia there are far more pedestrians and far less deaths at the hands of vehicles due in some part to these flyovers.

the point is the community has met with DOT and pols many times over this, and at the very least some commitment is in order from the City.

Barring that commitment the president of the Board of Hamilton Madison House on which I sit as an executive board member, has also opted out of the celebrations, and has officially made a statement to the Chinese media explaining our position.
Jan Lee

and even more commentary :

It is important to acknowledge the ABSENCE of several notable Chinatown organizations from the celebration . Lin Sing Association, which is 109 years old, located at 46 Mott St. determined that the many horrible deaths that have occurred at the foot of the Manhattan Bridge is nothing to celebrate.

In fact today's Sing Tao newspaper, the largest Chinese language paper in New York, interviews family members of victims of traffic accidents at the Bridge. To date, after over a decade of Chinatown advocates pleading with the City and DOT to improve the situation at the Bridge , nothing has been done.

Following the lead of Lin Sing Association, numerous other clubs and age old support groups have protested the celebration by not appearing on Sunday. The Chinatown Consolidated Benevolent Association's board, in opposition to its Board President, Justin Yu, voted NOT to participate.

Justin Yu, however, is expected by many to make an appearance. Justin Yu's daughter, it is known by many in Chinatown, works for Mayor Bloomberg in his community assistance unit.
Posted by Watchdog at 3:29 PM