Chinatown's defacto Skate Park - Thanks Department of Transportation, you've made us less safe. 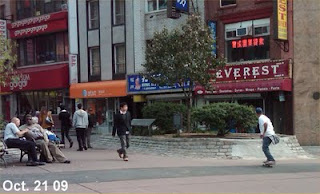 A skateboarder about to make the leap on what seems to be a newly cemented ramp retrofitted for exactly that purpose. The Parks Department in 1999 laid a sturdy foundation for making jumps in this public park, the skaters took the initiative to "tweak" it a bit by smoothing it out.
In order to let each other know where this "skate park" is located, skateboarders publish the location on websites catering to fellow skateboarders.

Who knows what happens at Chatham Square in the dark of night? Rogue cementing apparently....... if we can only get them to fix all the potholes in Chinatown while they're at it.
Here is a blog post from a tipster, this is from www.bigappleskate.com :
www.curbed.com reports that the non-sanctioned skateboard and bmx bike park under the Brooklyn Bridge is going to be closed due to the renovation of the Brooklyn Bridge. The story originates from the Downtown Express.

">Chinatown already has a problem with skate boarders and bmx bikers using Chatham Square as their own skate park. The planned closure of the Brooklyn Bridge park will surely bring more of these "enthusiasts" three blocks north to Chatham Square and nearby residential properties that have already been plagued by skateboarders leaping off their property at all hours of the day and night.

The owner's of the Everest Diner tell CCRC that they have had to replace the glass door to their diner several times because skaters and skateboards have crashed through it. They explain that there is simply too many of them for the local police to enforce, and the police in fact, have "just stop coming" according to the owners.

The Department of Transportation has, in its infinite "wisdom," created a hazard right in our neighborhood, and done nothing to address this problem. BMX bikes, and skateboards have been around a long long time, surely in 1999 when this "feature" of Chatham Square was implemented, someone should have known this would become an immediate pedestrian hazard. WHO would intentionally design planters with the perfect curvature for skateboarders and bmx bikers? Likely the D.O.T. will blame the Parks people, Parks will blame City Planning, and the blame goes on..... meanwhile for the last ten years Chatham Square is a hazard and not at all the "peaceful sanctuary" envisioned by the city. With this type of activity -- would you allow your grandparents or children walk through or sit without a defensive guard running interference ahead of them? 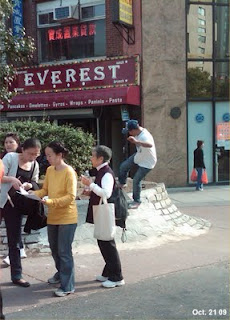 This woman was nearly hit by this inconsiderate skateboarder, or was she inconsiderate enough to stand in the way of skateboarding at this "pedestrian plaza" designed by the D.O.T. and Parks Department?
The $50 million redesign of Chatham Square which the city tried to ram through the community without sufficient notice or input in late 2008 was fiercely opposed. The Chatham Square redesign as proposed by the NYC Parks Department has remarkably similar low walls, ramps, steps and even a fountain -- perfect for the same skateboard activity and bmx biking as the current design. At a Community Board #3 Parks committee meeting this spring where the Parks Department unveiled their drawings of the intended renovations to Chatham Square, coincidentally about 40 skateboard enthusiasts were crowded into the room. They could be seen snapping pictures of the drawings, and tracing the outlines of ramps with their fingers as if to plan their high speed jumps.
The skateboarder's enthusiasm over the new design, below, for Chatham Square is precisely the reason why it should not be built, and if it is built, it must have features that DETER rather than ATTRACT skateboarders and bmx bikers, both of whom use ramps and steps as jump off points, endangering passersby, and especially our senior population in Chinatown. The Parks department never consulted with the community on what features it would like to have in the park, obviously taking a cue from the D.O.T. in successfully excluding the opinions of the residents, businesses, and people who will be using the park. 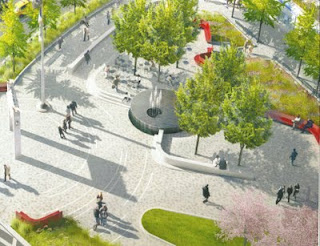 In short, Chinatown already has a dangerous illegal skate park, and the best the DOT and Parks Department can do is design another one? Community support - no way!
RECENTLY received:
LEGAL skateboard parks exist in ALL FIVE boroughs according to The Daily News. This is a good argument against rogue skate and BMX bike parks. Sanctioned skateboard parks are good for NYC because they ensure safety for both the skaters and bikers as well as pedestrians who are kept at a safe distance and not forced to share space.
comments posted to DownTown Express Oct 28th 09, letters to the editor:
To The Editor:
I just read the article in the Downtown Express about how the banks are closing. That isn’t a smart move for the city because now skaters and bikers are just going to go to other spots around the city and end up getting in pedestrians’ way and getting kicked out of spots that they aren’t allowed to be. I think the Banks is the one spot in N.Y.C. where skaters/bikers can hang out and ride without getting in trouble or wrecking ledges and benches and getting in people’s ways. Not only that, but the Banks are a historical spot for us. I mean just look at some of the things that happened there.
Joe Karlson
To The Editor:
I concur fully with the opening sentence of the news article on the Brooklyn Banks park (“Don’t let the Banks collapse, skaters say,” news article, October 23 - 29), which states “The Brooklyn Banks is a place with no rules except gravity.” Therein lies the problem for those who live next to it at Southbridge Towers.
There are no curfews, so skaters/bikers remain active well after dark. There is no supervision so some build wooden “jumps” which could be dangerous. The noise of skaters/bikers, because to the proximity of the “jumps” to St. James/Pearl St. is magnified by and echoes through the Brooklyn Bridge arches into the apartments of Southbridge residents. Your ample photos demonstrate the graffiti, and one quote in the article states, quite matter-of-factly, that the park is filthy.
Many skaters on their way to the park elect to travel on sidewalks, posing a danger to everyone, but especially to seniors, who frequently complain to me, thinking that as a member of Southbridge’s board of directors, I can solve this type of problem — I cannot. Worse, the park is actually in Community Board 3, so our local Board 1 had no input in the decision to locate it there.
In short, this type of park would be best in a non-residential area, perhaps on Randall’s Island.
John Ost
Posted by Watchdog at 4:16 PM