"Let Them Eat Dim Sum!!" Mayor Tries to buy votes in Chinatown with a Senior Breakfast 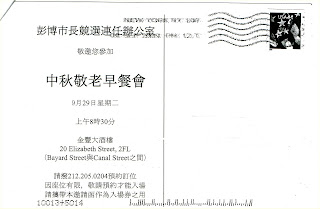 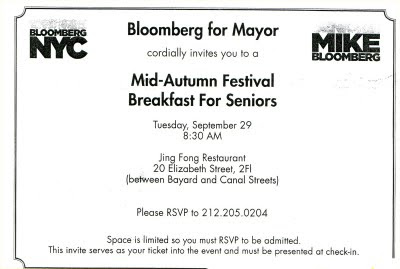 
As if it wasn't bad enough to BUY votes in the Chinatown community, Michael Bloomberg has managed to co-opt a Chinese holiday (Mid Autumn Moon Festival) to do it. Today, Tuesday, September 29 at 9:15 a.m. Mayor Bloomberg slithered his way into and out of a dark, alley way entrance to Jing Fong restaurant at 20 Elizabeth Street, to avoid the chanting protesters at the main entrance shouting "Dump Bloomberg" and "Chinatown - Not For Sale".

Fifteen minutes before Bloomberg's entourage arrived in front of Duane Reade drug store on the Bowery, 5th Precinct officers drove a line of four, full sized NYPD vans in front of the protesters -- parking them bumper to bumper on Elizabeth Street to block the view of the Mayor from protesters. The chanting grew louder as news of the Mayor's arrival spread via cellphone contact with people on the Bowery. Protester's placards read everything from "Buying Breakfast = Buying Votes" to "Eight is Enough" and "King Bloomberg." One favorite was "Return Democracy," referring to his opponent's comment that "Bloomberg has hijacked democracy". 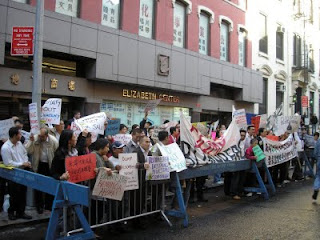 The Mayor has yet to make an honest-to-goodness meet and greet on the streets of Chinatown, his style is more akin to "let them eat DIM SUM. I can handle them from the podium, heck, I'll even pay for it."

Seniors received this invitation in the mail, advising them to RSVP and that seating was limited. Jing Fong restaurant seats over a 1000 people 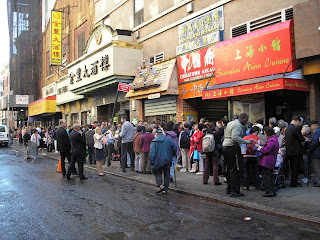 Judging from the 1500 or more people lined up at 8:00 A.M., with many turned away, there were plenty to provide a paid audience for his campaign promises. Yet many had long enough memories to remember that for eight years, Bloomberg's policies have only served the elite while destroying the predominantly working families and small business community of Chinatown, passing policies, such as:
But as a few seniors told us on the way into the restaurant, "Sure, we're
going to enjoy the dim sum, but doesn't mean we're going to vote for him!"
Posted by Watchdog at 10:54 AM

I was there. Bloomberg did not even have the guts to walk into the FRONT doors of the restaurant to go to his food bribing event!!! Does it get more sleazy and gutless than this? No-guts Bloomberg also snuck out the BACK door when he left because he did not want to confront reality.

Protesters outside the event confirmed - you can't buy votes with a few plates of food in Chinatown, not after ignoring the wants and needs of the comunity for all these years.

Bloomberg turned a blind eye toward parking permit abuse in Chinatown from 2001 to 2007, most of his administration, and he only opened his eyes when it was time to push his pet congestion pricing scheme which would spell disaster to small businesses, including virtually all the businesses in Chinatown. It's no wonder Bloomberg is not welcome in this community.

Anybody But Bloomberg said...

Here's a mayor that this community only sees around election time. What's up with buying his way into communities, community and media organizations, in addition to an unhealthy sway over other elected officials?

Our community leaders need to develop more of a spine and less fear that their coffers will be empty if they don't toe the Bloomberg line. This guy is hi-jacking democracy. Wake up folks before we're stuck with an incumbent who has more control than we could ever imagine or want.

Bloomberg has done worse than turn a blind eye or ignore - he has LIED to the Chinatown community and to the voters of New York.
He talked a good talk about term limits - so he wouldn't have to run against an incumbent Giuliani.
He has said that he would re-open Park Row and yet he seeks to hide behind the DOT in their plans to permanently close the street.
He has said that the Chatham Square reconfiguration is on hold - but he does not say that it is on hold until after the election, when he hopes that he will be given 4 more years to abuse the community.
And those "community leaders" who would continue to promote Bloomberg in the face of all that he has done to the community would just as quickly sell their brothers and sisters to the highest bidder.