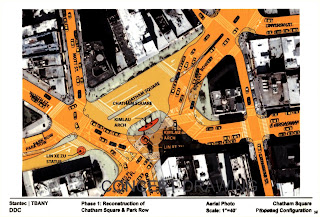 
Above is a diagram showing one map laid over another to show the distinction between what Chatham Square looks like currently, and what the City's proposal is for the reconstruction.
November 26th is the FIRST time that this reconstruction plan has been made available to the public, despite Josh Kraus's (Dept. of Transportation) statement in DowntownExpress this week that " we've had an ad-hoc plan since 2001". Sure, CB3 and DOT will tell you that "groups in the community have seen the plan" but that does nothing if there has never been any way to view the proposals until November 26th 08.

The only reason why the information is NOW available on line is because several outraged business people demanded it at a presentation hosted at Lin Sing Assoc. on Mott St. on Nov. 25th. Surprisingly DOT claimed at the Lin Sing meeting that "CB3 has had the plans , we don't know why they are not on their website, we apologize on behalf of CB3, even though it is not our place to do so". In less than 24 hours the plans were on the CB3 website AND the DOT website.
If it was that easy to do, then why was the information held from the community?

The LIGHT yellow paths on the map show the current configuration, while the darker ORANGE paths show the proposed plan.
Please comment on this plan.
Posted by Watchdog at 3:15 PM