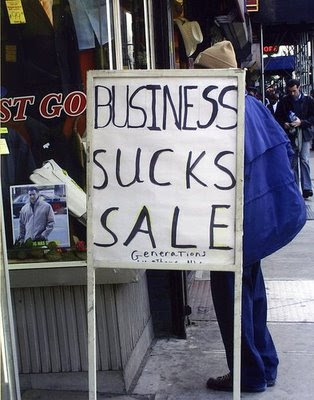 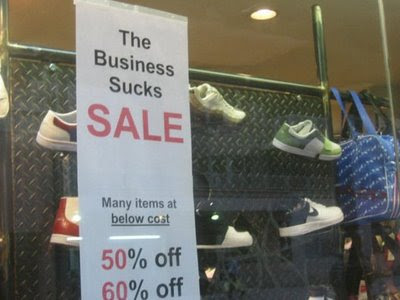 Here are some excerpts from a great article from a reporter working for Downtown Express Julie Shapiro. Some of our readers have known of Julie's excellent coverage of the placard parking abuse article which appeared in Downtown Express back in April of 08.

Here is Julie's article in its entirety.

This is not reassuring when our neighbors to our South are reported about in this way, this is what we have to look forward to if we allow Chatham Square to be torn up at this time:

"In addition to losing foot traffic, Portnoy is also having trouble getting deliveries. The trucks that deliver cans of paint, for example, are too big to pull up near his store, and even if they do squeeze in, they get a ticket." ....just what Chinatown small business needs at this time, more expenses and harder delivery routes, doesn't anyone recall that we just got a hold on placard parking abuse?

"The water shutoffs, which are part of replacing the 150-year-old water main beneath Fulton St., paralyzed Sav’s business for hours at a time. When the city first broke ground on the project, hordes of rats flooded the street, and it was nearly impossible to keep them out of the ground-floor restaurant, she said." ......lovely isn't it?.....

DOT, at the last meeting they had in Chinatown, informed us that water main work will be done on Worth Street to East Broadway. Just the mention of this rat problem in the newspaper is enough to keep patrons away during construction in Chinatown.

With reference to LMDC's grant money for businesses hurt by endless construction here is a voice of reason by a businessman who thinks like a businessman and not like a bureaucrat:

“The program is not going to help businesses that much,” Zaurov said in a phone interview. “If they would finish it faster, that would be a lot better than any money they give.”

Virtually anyone who has had a jackhammer outside their window can relate to this gentleman's experience:

"Zaurov said the city told him the construction would only last for several weeks, then they said 10 weeks, then 18 months. And while the pace of work was fast at the beginning, with as many as 50 workers per block, Zaurov said the site has gotten sleepy.


Here is another observation during construction :


Alex Costa, who works behind the counter, said the noise and barriers keep customers away. “People are lazy — they just go somewhere else,” Costa said. “People walking on the other side don’t see the signs.”


We'll be interviewing fellow businesses South of Chinatown to see for ourselves what HELL the DOT has in store for Chinatown, check back on the blog to see what we find.