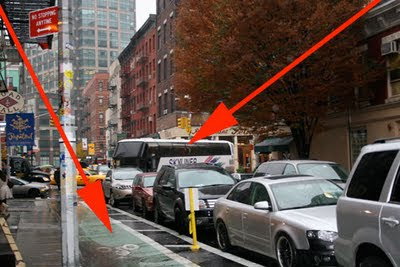 photo: Curbed.com
Mayoral Candidate Bill Thompson on bike lanes and their impact on businesses and communities.

Campaigning for mayor in Chinatown yesterday, Controller William Thompson promised to open up Park Row to traffic and rip out the bike lane from SoHo to Chinatown on Grand Street -- both big priorities of angry residents and business owners there.

But that wasn't all: He cast a gimlet eye on some of Mayor Bloomberg's big steps to take away space for cars and give it to bikes and pedestrians, like those snazzy bike lanes on Eighth and Ninth avenues that used to hold traffic lanes, and of course, the closure of parts of Times Square.

"All across the city of New York, you're hearing people complain about bike lanes that have been put in without consultation with the community," he said. "I would take the ones out on Grand Street right now, and I think then going back in other places and working with the community, where they should stay and where they should go. I think that's one of the things -- I'm in favor of bike lanes, but you can't put bike lanes in without speaking to the community. You can't put bike lanes in that do damage to the local businesses, and we're seeing that happen across the city of New York."
The bike lanes have been a controversial push of Bloomberg's transportation commissioner, Janette Sadik-Khan, and have created somewhat of a backlash among voters who think it's a symbol of New Yorkers being shoved aside for tourists. (For what it's worth, the cabbie who drove the Brawl, the Post and the AP from a Thompson event to a Bloomberg event yesterday said Sadik-Khan's car-free Times Square has convinced him to vote for Thompson in November.)

Thompson didn't take a position on the Times Square closure, saying he'd wait until he has numbers to judge whether it has worked or not. But he seemed willing to reconnect the closed sections of Broadway in a heartbeat:

"A number of tourists are, you know, are spending time in Times Square. I'm not sure that New Yorkers are. And what's more important, what's it doing to the local businesses, particularly in a recession. Is it hurting them? So, we're reaching out, and you're looking to try to see the studies that are coming back. Is it impacting businesses in a negative way? If it is, then it needs to go."