From City Hall News "Chinatown pushes back against Mayor's reelection" 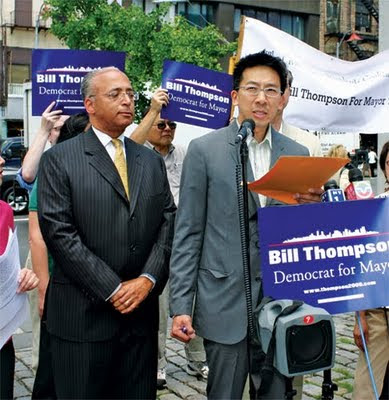 When he ran for re-election in 2005, Mayor Michael Bloomberg had few bigger boosters than Eddie Chiu.

Chiu, head of the 109-year-old Lin Sing Association social club in Chinatown, allowed Bloomberg to use the group’s six-story headquarters on Mott Street as his Chinatown campaign office—and the mayor proceeded to take upwards of 80 percent of the vote in the neighborhood, winning the overwhelming support of Chiu and other small business owners.

Far from allowing the mayor to use his office, Chiu is now refusing to endorse Bloomberg, despite numerous entreaties from his campaign. In fact, he recently allowed an anti-Bloomberg group to hold a press conference at the group’s headquarters blasting the mayor.

“It’s very different from when he was running for a second term, to where he is now,” Chiu said. “A lot of people in Chinatown have had a change of heart. I think they’ll vote for Thompson.”

Bill Thompson has been trying to take advantage of the unrest, making several campaign stops in the neighborhood and holding a press conference at Park Row in late June to receive the endorsement of the Civic Center Residents Coalition. The population flexed its political muscles recently by electing Margaret Chin to the Council and unseating incumbent Alan Gerson.

A bike lane on Grand Street that further narrowed the already tight street is a major concern, but Park Row appears to be the main point of contention for Chinatown voters. The thoroughfare once connected Chinatown with the rest of Lower Manhattan, but was shut down after 9/11 because of concerns about an attack on 1 Police Plaza.

Residents say that this has crippled both the economy and the quality of life in Chinatown, choking it from the rest of Manhattan, with traffic often clogging neighborhood streets.

Late last year, the Economic Development Corporation, the Department of Transportation and the Police Department proposed a fix to alleviate the traffic flow problems: a $50 million plan to redevelop Chatham Square, a complicated seven-way intersection south of the Brooklyn Bridge.

Most Chinatown business and civic leaders, however, have objected to the plan since it would essentially make the closing of Park Row permanent.

They also say it was developed without hearing concerns from affected residents.

“We’ve made offers and proposed many alternatives,” said Jeanie Chen, of the Civic Center Residents Coalition, a group that advocates for the reopening of Park Row. “But the mayor’s office wants to do this without community input.”

But when reporters then followed up with the mayor’s office after the meeting, it denied that the mayor had made any such promise.

The Bloomberg campaign did not respond to a request for comments on this or other issues related to Chinatown, or about his standing in the neighborhood.

Justin Yu, head of the powerful Chinese Consolidated Benevolent Association business group, attended the dinner. A Bloomberg ally, Yu said that the mayor had promised to delay the start of the Chatham Square development—it had been scheduled to begin in July—and had not specifically promised to advocate for Park Row’s reopening.

Yu, who is considered so influential locally that some people call him the mayor of Chinatown, said that though he opposed the Chatham Square proposal, he would continue to support Bloomberg because of the mayor’s record on education and crime.

“Nobody satisfies people 100 percent of the time,” Yu explained.

Others contend that Yu has divided loyalties because his daughter, Pauleen Yu, is the Chinatown liaison for Bloomberg’s community affairs unit.

And they say the mere fact that Bloomberg is speaking only to the Chinatown elite, rather than seeking input from the community at large, represents the mayor’s attitude towards its residents.

“It’s indicative of a selective, colonial mentality,” said Jan Lee, a Chinatown small business owner and opponent of Bloomberg’s proposal. “In colonial situations, government has chosen to speak only to a select few leaders. They stay away from the masses.”

Others in the community wonder if the unrest with Bloomberg is as deep as some of the rhetoric suggests. During the 2005 campaign, they note, Bloomberg made a concession to the community by allowing bus traffic to again begin traveling down Park Row.

But Lee said that while Thompson has been campaigning often in the neighborhood, Bloomberg had not yet held an appearance.

“He can’t walk down Mott Street anymore,” Lee said. “We will no longer welcome him with open arms. And he knows that.”

--
ABOVE: Bill Thompson has been nurturing support among a Chinatown community unhappy with the mayor’s record, gaining support from local leaders like Jan Lee, a small business owner and executive vice president of the Civic Center Residents Coalition
Posted by Watchdog at 2:29 AM