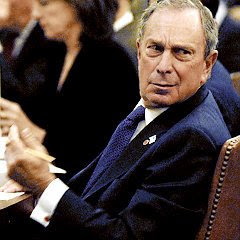 New York City - Mayor Michael Bloomberg called the question “ridiculous.” A reporter wanted to know whether, in view of the economic adversity facing New York and the nation, he would consider limiting his spending in the coming mayoral campaign.

The Mayor was clearly annoyed.

“I don't understand your question,” he said angrily. “'I am not going to talk about the campaign. I think it's one of the most ridiculous things I have ever heard.”

It may not sound so ridiculous to the New Yorkers who are living from paycheck to pay check or those who fear that that might soon be the case. Reportedly, Mike Bloomberg is ready to spend 80 to 100 million dollars to get elected to a third term. He put the heat on the City Council to have the law changed to allow him to run -- even though by referendum the people of New York had already voted twice to limit the number of terms to two.

This mayor is used to getting his own way and he's glad to throw money around to accomplish that goal. The Times carried a story the other day detailing the fat bonuses he's given his closest aides out of his own pocket for their services in furthering his ambitions. His generosity also extends to how he treats them on the road. According to the Times, Bloomberg puts his senior staff members up at the Four Seasons in London [$400 a night], at the Intercontinental in Paris [$320] and at the King David in Israel $345]. And, the Times reports, as he seeks to recruit new members to his staff for the campaign ahead, he makes it clear that they will have a chance to inhabit the Bloomberg world and get handsome bonuses for their efforts.
Advertisement:

One former adviser said he was surprised to find, after the 2001 election, that $25,000 had been added to his bank balance. Bloomberg had bestowed a little gift on him.

“I was shocked,” he said. “I knew big campaign operatives would negotiate bonuses but I was just a policy adviser.”

William Cunningham, an affable man who advised Bloomberg on strategy in the 2001 and 2005 campaigns, was paid about 1.2 million dollars for his work---and, the Times reports, he got bonuses of $300,000 each after each contest. The money enabled him to send his children to college, he said, and to go on pricey vacations with his family. “For that,” Cunningham said, “I am very grateful.”

No one can begrudge anyone a chance to make a good living. And the fault here is hardly on the recipients of Bloomberg largesse.

The problem here falls squarely on Bloomberg's shoulders. New York has a campaign finance law that was devised to make for an equal playing field. In the coming mayoral election, the two major contenders for the Democratic nomination are City Comptroller William Thompson and Congressman Anthony Wiener. Alongside Mike Bloomberg, both are paupers. Financially, he can wipe the floor with them.

Thompson's campaign manger, Eduardo Castell, said: “as he has in the past, the Mayor is buying a campaign.” Speaking of the perks that go to Bloomberg aides, the Mayor's spokesman Stu Loeser said: “These are rare and relatively minor benefits that don't come close to offsetting the workload, especially when you've flown through the night and have to work on both local and New York City time.”

Which gets us back to what the Mayor called a “ridiculous” question.

We're facing tough times. The mayor is a great philanthropist. He's supported many charitable causes. The other day, he promised the bishop of Brooklyn to consider a plan to convert four parochial schools threatened with being closed into public charter schools.

But it is hardly ridiculous to ask whether this man should flaunt his wealth in the political arena. he has done good for the city. He has also exhibited great hubris and if he truly believes in a democratic system, he should be willing to accept legal limits on campaign expenditures.

You have fans out there, Mr. Mayor, and critics. Are you afraid to test your achievements on a level playing field?
Gabe Pressman WNBC Feb. 11th 2009.
Posted by Watchdog at 12:52 AM