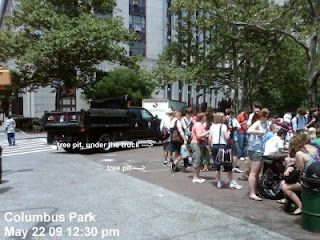 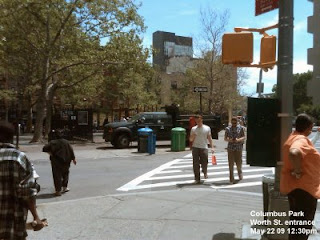 A day after Senator Squadron and Borough President Stringer announce a new legislation called the Haley and Diego bill in honor of the two children killed on East Broadway as a result of a commercial van backing into them, the NYC Parks Department continues to threaten the sidewalks around Columbus Park with their OWN vehicles. Almost all of the vehicles have poor rearward visibility due to their size. This is especially troubling considering the considerable usage of the park.
Note the school kids trying to relax next to an idling truck. Would you allow this in your neighborhood?
It's time the parks commissioner reign in his dangerous and disrespectful fleet. This is no way to be "green".
Posted by Watchdog at 12:54 PM