Limousines line up at City's wedding Chapel - more traffic on Worth 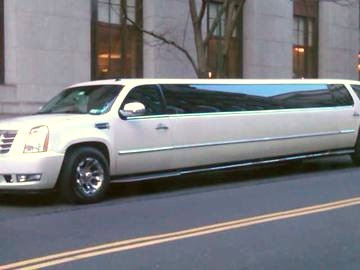 A stretch limo, one of many on any given day, on already crowded Worth St. in front of the newly opened NYC Wedding mill expected to rival Las Vegas in number of weddings performed annually.

What -- wedding traffic? Despite the Chinatown community's strong opposition to the city's proposal to reduce Chatham Square's moving traffic lanes to two, the wedding vehicles to Worth Street's new Marriage Bureau/chapels (that Mayor Bloomberg has been trumpeting as a rival to Las Vegas' marriage chapels) will certainly cram this narrow street and increase travel time for all crosstown traffic. With Fulton Street under reconstruction, Pearl Street and parts of Duane Street permanently closed, Worth Street is one of the few crosstown streets in Lower Manhattan. Ever see a bride wearing a wedding gown on mass transit? Wake up DOT or soon, you won't be able to get to your own offices on Worth Street.

The question is where were all the pedestrian and bike advocacy groups when the City announced the opening of this wedding depot? Bloomie says he wants this wedding factory to "rival Las Vegas" in the number of weddings performed, many of these weddings will be accompanied by limousines like the one pictured. I guess limos streaming past Columbus park where kids play and elderly visit is just fine with these so called pedestrian advocacy org's.

The change of this building's use from the dept. of motor vehicles to a wedding chapel that will rival Las Vegas in the number of weddings performed annually should have been a red flag for pedestrian and bike advocates since this change SURELY brings more vehicles (limousines no less) into the already congested Worth Street corridor. Thanks to the City and Mayor Bloomberg we now have more cars taxis and limousines in Chinatown, we could have used the help of pedestrian and bike advocates to STOP this insanity.

The closure of the Brooklyn Bridge during its construction will bring 4000- 5000 cars per hour into Chinatown over the Manhattan Bridge, over 700 of those cars will be diverted through Chatham Square (while it is under construction) and onto Worth St. now crowded with Judge's cars, Government employee's cars, taxis and limousines.
What would you do if the City decided to plop the Catskills on your street???

Chinatown is left with the task of balancing the commercial and residential needs of the community while trying to cope with an accelerated time frame forced upon us by the City's own slash and burn agenda. What the community doesn't need are special interest groups who claim to have the best interests of safety at hand, while they promote untested, unproven plans in neighborhoods they don't live in , don't work in, and don't pay property taxes in.

If there was EVER something to protest in the name of safer streets it should have been the placement and opening of the city's wedding factory on Worth St.
The pedestrian and bike advocates were strangely silent on this issue and have instead chosen to openly support the DOT's plan for Chatham Square even before it was put through vigorous traffic simulations by an unbiased professional (someone who works with Trans. Alt. almost daily).

Much in the same way that the D.O.T. has ignored all the construction going on in Brooklyn, the new condos on Flatbush, DUMBO, Battery Park City, Chinatown, and now the wedding chapel on Worth in its plan for Chatham Square, Transportation Alternatives has just as blindly signed on to the D.O.T.'s agenda. They've chosen to do this even though no one in Chinatown wants the D.O.T.'s plan to move ahead. If you can't be a part of the solution FOR CHINATOWN, then don't be a part of the problem.
Posted by Watchdog at 1:30 PM

Transportation Alternatives and its minions will never condemn anything proposed by Bloomberg and his hippy DOT commissioner, Sadik-Khan.

Do you think these characters, few, if any, who actually live near here, care about your opinion, the community's welfare, or the neighborhood's concerns, and not about their own selfish, myopic agenda to turn NYC into Portland or Boulder - cities where these guys probably originate?

These transplants from suburbia condemn indigenous NYC community-based activism when, at the same time, they are led around by the nose by Mayor Mike and the DOT, as they pedal merrily home to the neighborhoods in Brooklyn that they are busy gentrifying.