Fire in Chinatown - Community Finds refuge around the corner. 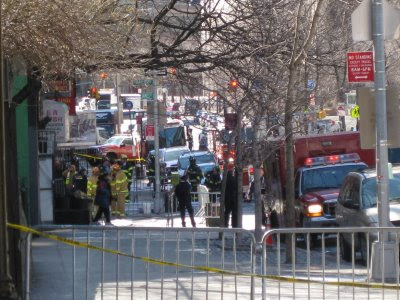 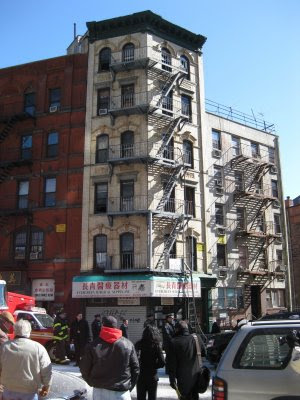 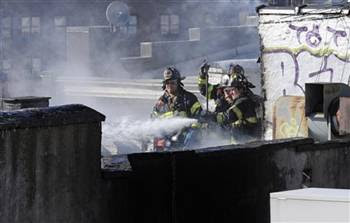 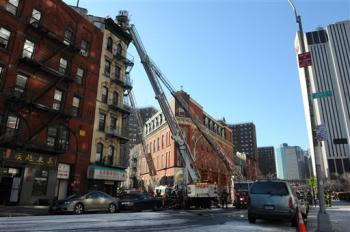 Although the buildings look relatively in good shape, only hours earlier flames were leaping out of the windows at the corner building at James St. (white building). NY Times photos shot from neighboring buildings show that the back of the building is in very bad shape.

A fire killed at least one person in Chinatown last night in an early morning blaze that ripped through a six story tenement building on James St. one block from Chatham Square.

Hamilton Madison House, one of NYC's oldest settlement houses located at 50 Madison Street on the Lower East Side of Manhattan, around the corner from the scene of the fire is acting as the disaster center for this tragedy. As of 4:pm displaced residents are still there waiting to hear the news about where they will end up tonight.

At about 7:15am Frank Modica, Executive Director of Hamilton Madison House was already at work when he was summoned to the entrance of the "house". First responders from the Office of Emergency Management told Frank that they needed to get about two hundred people off the street and into a warm safe place immediately. Frank instructed his two maintenance personnel, the only two other people in the building at the time, to start setting up tables and chairs in the auditorium inside Hamilton Madison House.

At about 7:45am the families from the scene of the fire started to come in escorted by O.E.M. and Red Cross personnel. Ricardo Elías Morales, Chairman of the NYC Housing Authority was also on hand to speak with Mr. Modica and insure that everything was going smoothly.

Within minutes a nearby classroom was commandeered to become an impromptu processing and command center.

As Hamilton Madison House staff and personnel started to roll in they immediately got to work translating in both Spanish and English. Frank greeted elected officials who came streaming in all morning.

At 12:pm around 150 or so people were waiting calmly and patiently as CCBA Chairman Justin Yu and his assistant Gary passed out blankets and food, and helped to keep order in an otherwise surreal environment. A faint smell of smoke could be detected in the room. Justin Yu's daughter Pauline was at Madison St. directing families to the Red Cross processing area. Reports say that at least 60 families are temporarily displaced.

Also on hand were Borough President Scott Stringer and his staff members, as well as staff from Senator Daniel Squadron, Assembly Speaker Sheldon Silver and Council member Alan Gerson who, like the Borough President was personally on hand to assist.

Jimmy Yan of the Borough President's office was sure to reach out to community leaders as events unfolded to ensure that their office was available to assist in any way. In fact every single elected official representing Chinatown including the Mayor himself was present to offer their help and suppport. Some were seen with the families for hours on end.

Hamilton Madison House staff was sure to respect the privacy of the families who had just been displaced by keeping photographers and press at bay, while allowing for anyone the opportunity to speak to the press, outside of the gym.

Hamilton House reports that approx. 25 young children ages 2 - 18 were waiting in the auditorium, as well as some 20 seniors. One four year old girl was still in stocking feet while she waited to learn the news of where she would be that evening. The Red Cross provided her with shoes and someone brought her a toy bunny.

Some students actually made it to school as the smoke was still rising from the burned out building. I.S. 131, knowing that Hamilton Madison House was the holding center for the displaced families, called there to check on other students. Parents knew that as long as their kids were in school they were safe. In some ways it was more familiar and less traumatizing for the children than being sequestered in the auditorium for hours. A steady stream of individuals and families were moved from the auditorium to the makeshift processing center by Red Cross volunteers.

As of 3:pm Hamilton Madison House says that several van loads of people have been taken to the Red Cross headquarters at 49th street for final processing to determine where they will be spending the next few days. The condition of the buildings next to the scene of the fire is still being assessed, however it looks as though at least some families will be able to return to their apartments tonight.

Hamiton Madison House made sure each family received a flyer so they could contact HMH's Chinatown Resource Center to help them process the paper work in the days and weeks to follow this disaster.

As the families, about 90% of whom are Chinese and 10% are Hispanic, wait patiently Hamilton Madison House is already planning for their needs and support for the coming days, weeks and even years. As Frank Modica puts it "this is what we're here for".