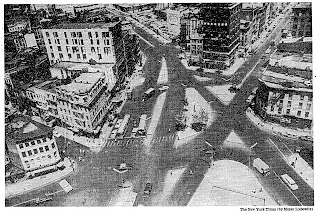 A NY Times photo of Chatham Square in 1964 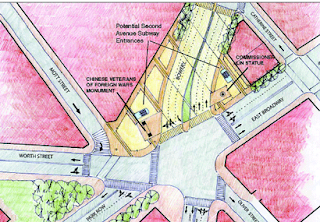 A 2005 D.O.T. and A.A.F.E./ R.C.I. - Rebuild Chinatown Initiative produced proposal for Chatham Square. Note the placement of the American Legion War Veteran's memorial arch. This plan was in place before the D.O.T. and the community realized that the memorial arch sits on federally regulated NY State parkland. The parkland designation means the arch and the land it sits on cannot be moved or altered without State legislation. In subsequent renderings the memorial arch is no longer moved, but the land it sits on grows into a 22,000 sq. ft. blockade to Park Row which effectively makes permanent the elimination of Park Row as a public thoroughfare. 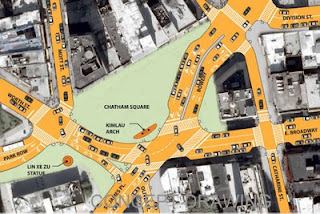 This rendering of the Chatham Square plan is similar to the one produced for the Final Environmental Impact Statement for Park Row Closure. This is the DOT produced plan that is being pushed through, despite a lack of pedestrian safety studies to accompany the plan, and despite virtually no public outreach by DOT and NYPD. (see CCRC blog posts relating to lack of outreach) 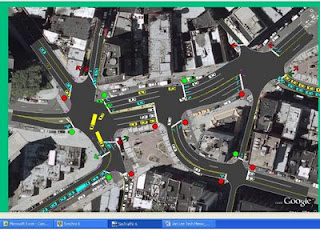 CCRC proposal #1 - This and the plan below are alternatives to the DOT produced plan which will allow for the full reopening of Park Row in the future. 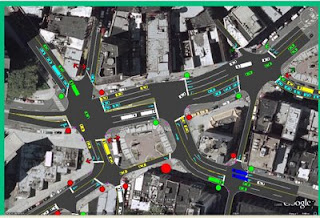