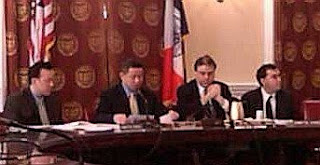 The Department of Transportation and the Mayor's office have tried to make their case that the Park Row Environmental Impact Statement, released in Aug. of 2007 after two and half years in the making is sufficient to satisfy the EIS requirement in the LMDC contract recently reviewed by Council members John Liu and Alan Gerson. It's noteworthy that the Final Environmental Impact Statement for Park Row has been removed from the NYPD website, there is no way for the public to obtain a copy of the Final EIS for Park Row unless it is "FOIL'ED". There's no way to tell when the F.E.I.S. was removed from the NYPD website.
Much was found to be inaccurate in the Park Row EIS, and in fact CB3 pointed out such goodies as "illegal segmentation" of data and testified at the draft EIS hearings in Chinatown. Community members and CCRC pointed out the business survey in the socioeconomic portion of the EIS is flimsy and without translations. CCRC could confirm less than 2 dozen businesses in Chinatown that were interviewed for the Park Row EIS. Real estate values and economic conditions were inaccurate and data used to obtain the findings were gleaned from constantly expanding and contracting geographic areas, a tactic often used to skew data to a desired outcome.
Business surveys and economic data, after community outcry, were rewritten to reflect a more realistic condition for the FINAL EIS. In short, the Park Row EIS was replete with errors, misinformation, flimsy surveys and worst of all the Chatham Square plan as a mitigation for the closure of Park Row. Between the draft EIS hearings and the final EIS some details were changed due to heavy scrutiny and criticism. Outting the errors and conspicuous omissions have been the source of much whining by the City and DOT as the reason why a backlog has occurred between the reconstruction of the Brooklyn Bridge and Chatham Square's reconstruction.

The Park Row EIS is unique in that it was done after the fact. Rarely are EIS's done retroactively. It is difficult to determine the effects of an "action" after it was done to the community and the data that precluded the action is difficult to reflect accurately. If the City wishes to have the EIS have a predetermined outcome, in this case - "closing Park Row was justified and necessary" - then the data collected to come that conclusion can be molded to formulate that result. CCRC has maintained that this is what was done in the Park Row EIS. Phillip Habib is the same planner responsible for both the Park Row EIS, and the Chatham Square plan being used today.

The socioeconomic portion of the Park Row EIS being applied to Chatham Square's reconstruction today is wholly inaccurate given the fact that the data collection reflects a period from before 2001 through early 2005. To say that the "action", in this case a four year long total tear down and reconstruction of Chatham Square, has been accurately addressed in the EIS which was begun in 2004 and completed in 2007 amounts to lying.

The Park Row EIS which contains socioeconomic impacts with a baseline condition precluding the attacks of 9/11/01 and ending in 2005 cannot be used to reflect an action that is ABOUT TO HAPPEN (Chatham Square reconstruction) in today's climate of recession, with projections that should extend at least five years into the future in the "WITH ACTION" scenario.

Although the Park Row EIS contains a rudimentary version of the Chatham Square alignment suggestions as a mitigation for the closure of Park Row, it does NOT reflect what impacts 4+ years of construction will have on the Chinatown community and therefore cannot be used in PLACE OF a separate and timely EIS of its own.

One of the most egregious omissions in the Park Row EIS is the lack of a pedestrian safety study. Numerous times the community and traffic Engineer Brian Ketchum have asked for a pedestrian safety study for the Chatham Square plan ,yet none has been produced. If such a study existed in the Park Row EIS, surely one would have been offered. Even if pedestrian counts and safety analysis was done for the Park Row EIS it could not be used today because, as Brian Ketchum has said numerous new residential developments have not been accounted for in the Chatham Square area.

Councilmembers Liu and Gerson questioned the D.O.T. and City representatives as to when the Chatham Square plans and accompanying maps and diagrams were submitted to local public libraries. The Council members determined from the lack of an answer that in fact no materials have ever been submitted to any public library anywhere in the City.

The City and DOT's response to claims of "not enough outreach" and "no access to materials" for perusal by the public of the Chatham Square reconstruction plan has been that they have satisfied this requirement because "it's included in the Park Row EIS" . CCRC has made the case that the version included in that document is rudimentary and therefore unacceptable. Not only that, the Park Row EIS is virtually impossible to locate online to this day. It used to be on the NYPD website, and during the draft EIS process complaints were made to the NYPD that the public had a hard time finding the 300+ page document on their website.
The Park Row Environmental Impact Statement is not available at the Chatham Square public Library. The only two documents that contain various versions of the Chatham Square reconstruction are NOT available at any public library in NYC, and yet the City and DOT claim that they have satisfied their requirement in providing access to the plan.
Posted by Watchdog at 11:06 PM