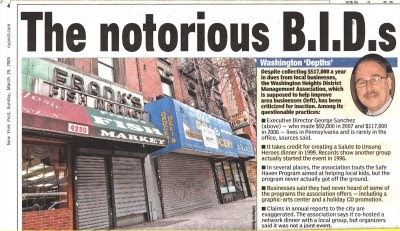 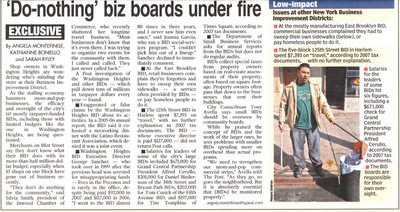 Shop owners in Washington Heights are wondering who's minding the store at their Business Improvement District.

As the stalling economy hammers mom-and-pop businesses, the efficacy and oversight of the city's 60 mostly taxpayer-funded BIDs, including those with limited budgets like the one in Washington Heights, are being questioned.

Merchants on 181st Street say they don't know what their BID does with its more-than-half-million-dollar budget, especially when 10 shops on one block have gone out of business recently.

"They don't do anything for the community," said Silvia Smith, president of the Inwood Chamber of Commerce, who recently shuttered her longtime travel business. "Most businesses don't know that it's even there. I was trying to organize two events for the community with them. I called and called. They just never called back."

A Post investigation of the Washington Heights and other BIDs -- which pull down tens of millions in taxpayer dollars every year -- found:

* Exaggerated or false claims by the Washington Heights BID about its activities. In a 2005-06 annual report, the BID said it co-hosted a networking dinner with the Latino Restaurant Association, which denied it was a joint event.

* Washington Heights BID Executive Director George Sanchez -- who took over in 1999 after the previous head was arrested for misappropriating funds -- lives in the Poconos and is rarely in the office, despite being paid $92,000 in 2007 and $117,000 in 2006. "I went to the BID almost 80 times in three years, and I never saw him even once," said Joanna Garcia, who ran a BID social-services program. "I couldn't pick him out of a lineup." Sanchez declined to immediately comment.

* At the East Brooklyn BID, retail businesses complain they're forgotten and have to sweep their own sidewalks -- a service often provided by BIDs -- or pay homeless people to do it.

* Salaries for leaders of some of the city's large BIDs included $671,000 for Grand Central Partnership President Alfred Cerullo, $201,000 for Daniel Biederman of the 34th Street and Bryant Park BIDs, $202,000 for Tom Cusick of the Fifth Avenue BID, and $197,000 for Tim Tompkins of Times Square, according to 2007 tax documents.

* The Department of Small Business Services asks for annual reports from the BIDs but does not do regular audits.

BIDs collect special taxes from property owners based on real-estate assessments of their property, often based on square footage. Property owners often pass that down to the businesses that rent their buildings.

While he praised the concept of BIDs and the work of the larger ones, he sees problems with smaller BIDs spending more on overhead than actual programs.

"We need to strengthen our mom-and-pop commercial strips," Avella told The Post. "As they go, so goes the neighborhood. But it is absolutely essential that [BIDs] be monitored properly."

angela.montefinise@nypost.com
Posted by Watchdog at 11:51 AM