What is particularly disappointing is that only two of 25 pharmacies in Chinatown decided to
open up during the blackout to provide much needed medications to Chinatown residents. 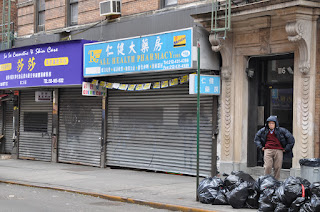 For one, why are there so many pharmacies in Chinatown? and secondly, are there only two who will serve usduring disasters like Sandy? It's a sad commentary indeed that with all the money they make from the
local community, that they can't support us, when even tofu sellers and fruit stands made the effort
to open up.
Here is the article translated:

Our reporter Wong Dik in New York reports: The recent blackout in Chinatown prevents lots of businesses from their normal operations, however there are also a number of ship-owners rack their brains continue to open their doors to provide necessary day-to-day services for local Chinese compatriots. Their benevolent acts are not stopped by either wind or rain in the power outage and there are many moving stories, which won praises from people in the area.

Wingsun Restaurant in East Broadway is one of the good ones. The restaurant owner KK Woo yesterday (2nd of Nov.) frankly commented, originally he just did not want to waste food and wished to reduce losses. So when the storm Sandy struck on the first day, the restaurant was still operating by using electricity generators. But later he found that many people in the neighborhood fell in embarrass situations because of the power shortage. Therefore he decided to open his door for others’ cell phone charging. Some shops charge 3 dollars for each charging but he doesn’t ask for a single cent. KK Woo said, "Customers are all people living nearby, so we just take it as providing convenience to the others." And yesterday there was a Spanish lady came for phone charging. When her cell phone fully charged, the lady was much grateful even though she did not have much common topics with the owner.

A Chinese compatriot Wong Lap Yan said, he didn’t get any prepare before the blackout. On the day that the storm arrived, all the shops were closed except Wingsun. "Besides there are hot Cha Siu Mai Fun available, staying with others makes my mood improved a lot. And the prices of food here remained, this is very precious." And a taxi driver, who having the rice served with meat and vegetables on top said: "The restaurant owner totally SERVES THE PEOPLE this time ". KK Woo smiled and said, "The credits go to many people this time. In fact, our chefs also cannot go to work. Fortunately there are neighbors know how to cook so we invite them come to help. Besides, many customers are using credit cards thus not giving many tips. It is not a big issue to our waiters and they still stick to their positions because we all understand that this situation is very special."

On the other hand, the Fook Chow Pharmacy locates in East Broadway continues its operation all along. Pharmacist Fung pointed at the generator outside the shop and said, "We see a lot of pharmacies in Mott Street and Canal Street are not opened. There are so many elderly people in Chinatown. If they are running out of medicines for heart disease and high blood pressure, the consequences are hard to imagine. So I think I should continue the business. " Pharmacist Fung spoke frankly, there is no profit in these days. And he said he takes it as community service this time and hopes the elderly are fine. 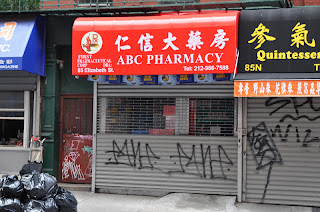 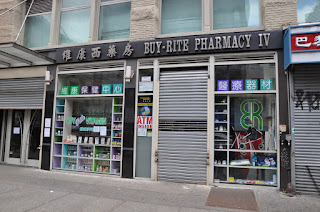 Mr. Lee Cheuk Fun whose mother over 80 living in the community sighed, luckily he has prepared before the hurricane came. He said it was disappointed that many pharmacies suspend their businesses. He pointed out that running pharmacies is a business involved in lives, owners of pharmacies make money in Chinatown and became wealthy however they don’t have the awareness of helping the residents even in the situation the governor signed the order to authorize pharmacies to sell small quantities of medicines to buyers without prescription presented.

Another pharmacy CTHC locates in the Bowery is open daily from 12:00 to 3:00 since the blackout. The shop owner Amanda Hon said, worrying about some elderly people who didn’t prepared enough medicines, she had decided to continue the shop’s operation. "Regardless the profit, I will continue to run the business even at a loss." In fact, Cheung Siu Ying who is the assistant to New York State Senator Daniel Squadron, admitted after her visited the elderly living in the Confucious Plaza, lots of people reflected that they don’t have enough reservations of medicines and in needs of assistance. 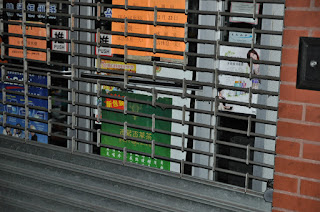