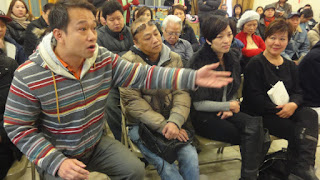 "After more than 10 years of restraint they now burst out; Chinatown business owners all rise up and howl after the storm"
08th Nov 2012
Our reporter Wong Dik in New York reports from Sing Tao NY

Improper policies made for Chinatown led to the barely breathing of economy for 10 years. Now it is stricken by the Northeast storm just right after the Storm Sandy. Difficult situations forced peoples’ anger exploded at an event in the Lin Sing Association yesterday (08th Nov), Chinatown business owners howled to the politicians and a representative from non-profit organization.

Yesterday, several business owners were invited to the Lin Sing Association. They expected that they will receive subsidies for their losses however the speakers just gave a bunch of empty words and hastily introduced the procedures of applying for loans and insurance claims on Internet.  The owner of Hong Kong Station (Wallace) Lai Chi Fung was the first to start revolt. He said angrily. "What’s the purpose of invitation? We can fill in the forms on Internet at home! What you these agencies can provide us? If it is wasting time, we’d rather go back and do more businesses!"

Lai Chi Fung couldn’t have sleep for days already. He came to blame with a pair eye bags which are large enough for shopping.  "Chinatown business owners are leading a very hard time after the storm and we have to continue to pay the rents, utilities and wages. The economy in Chinatown is so bad but community agencies are telling their own stories. How to revitalize the economy in Chinatown after all? Who can tell me! "

Lai Chi Fung’s comments are quite strong and the words go to the point. He won applause from everywhere at the scene. Consultant of the Lin Sing Association (Eddie) Chiu Man Sang who was one of the organizer originally had nothing to do with the matter however he had no choice but to meet the trick. He pointed out that it is a long-term problem in Chinatown and lots of other things are involved. But Lai Chi Fung was so aggressive. At last Eddie Chiu Man Sang was completely thrown off by the questions and exclaimed, "I have meetings with the government everyday. I will ask the mayor and governor to come." The business owners expected to receive subsidies at Lin Sing however they got the opposite of what they wanted therefore the atmosphere became more and more intense. Eddie Chiu Man Sang then simply and directly put that “The theme today is to send out blankets!" The boss of Shanghai Asian Manor pleaded with tactful words saying that it is a better choice for the community agencies to take some actual actions.

The Director of Human Resources Center Lee Hong Sing is the only representative from non-profitable organization, however finally he became the target of attacks for no reason. Facing attacks from the business owners, this gentleman was also struggling to cope. He claimed himself is a victim too because the Human Resources Center hotlines went dead. He also turned and threw the question to the ChinatownPartnership Local Development Corporation (CPLDC) saying that it is an organization established for economic development in Chinatown. When speaking about CPLDC, the owner of Man Yau Stationery Lee Kwok Wai whose shop in the Confucious Plaza was filled with pent-up anger. He complained, "We don’t’ want to listen to the truths and theories. Just tell us what we can do for you? And what you can do for us?"

The owner lady of Bayard Street Old Sichuan Mrs. Chu probably ate too much chili so she was especially fierce yesterday. She lashed out directly, "Loans are not what we want, we need direct subsidies, just like those after 911. This time it is even worse than 911. Where are Lau Sun Yat and Councilmember Margaret Chin? Why do politicians come for money for elections and they disappeared when we need helps?" It’s hard to tell for the past 40 years, but Margaret Chin indeed tried to fight for direct subsidies for owners of small businesses, even if there are no actual results. 14:00 today she will also work with other politicians for an aiding event held in the Chinese Consolidated Benevolent.

Finally, Mrs. Chu appeared to be helpless, and raised a suggestion with a no-harm-to try attitude, "Maybe one of you can give 500 dollars to each of our employees, 300 dollars will do anyway! Regretfully the speakers looked at each other and do not know what to do." 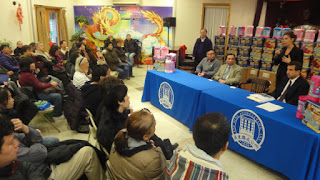 
In fact, Julie Menin who is the former chairman of the First Community Board came to donate 500 blankets. She was running for the district head and originally intended to take this event to win people's hearts. However and to her surprise, she was lost to the bewilderment when the business owners threw their complaints in Chinese to her.

Business owners sitting at the front were exasperated. The elders kept staring at the blankets behind the speakers because they actually came for the blankets.  Ng Aan Sim who is the owner of Amazing 66 Restaurant lost patience after sitting for a while. She kept showing the whites of eyes and finally threw a "Waste of time", left with the owner of the Red Egg David Wan each with a blanket under their arms.

Some politicians, non-profit organizations and trade unions in Chinatown are still remained at the thoughts of civil rights movement in the 1960s, and not keeping up with the immigrants’ positive objectives of climbing the social ladder. Some of them were driven by the principle of “Weak forces demanding strong non-profitable policies”. As consequences, many wrong population, housing and economic policies were produced in the past 40 years which resulting in poverty and aging problems in Chinatown and therefore pulling out an endless stream of social and economic problems. These parties usually play the role of "A troop representing a just cause", but they sacrifice people’s benefits because the policies are only for their own institutional and political interests. Flushing and the 8th Avenue are also Chinese communities but their practices are widely divergent as they are helping Chinese immigrants to build up wealth. Even though the business owner spoke out of the topic and complained at a wrong event, but this outbreak tells that the business owners have long been aware of the facts thus became unbearable. It is worthy for the community agencies to ponder and introspect. 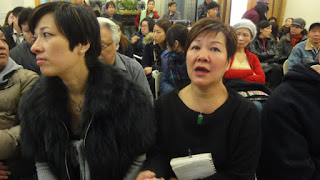 Ng Aan Sim  (rt) who is the owner of Amazing 66 Restaurant lost patience
after sitting for a while.