Who's dumping on Chinatown? Apotheke, that's who. 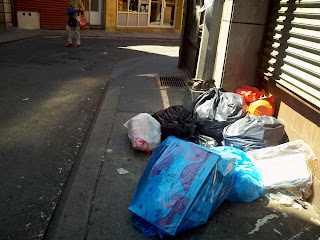 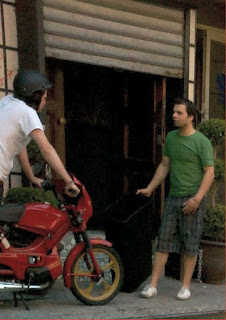 Trash duty: step one: dump trash from bar in front of post office, step two: continue being a Jerk.
The area in front of the U.S. Post office on Doyers street in Chinatown has become a dumping ground for trash bags and detritus. Tipsters in the neighborhood, successfully snapped off a few shots of the determined dumper last fall. Apotheke, a bar catering to tourists and the bridge and tunnel crowd apparently doesn't agree with the city's health code which mandates that all commercial businesses put their trash curbside in front of their own business for private carting pickup.


Apparently these offenses are not new at all, as www.Boweryboogie.com has covered this before - documenting even more trash coming from Apotheke. in October of 2011. 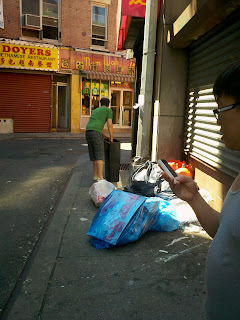 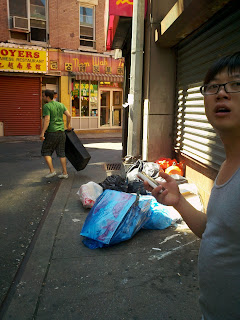 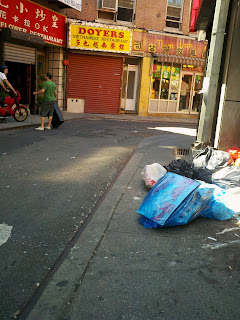 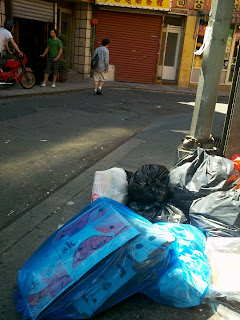 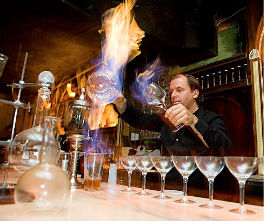 The Apotheke pyrotechnic stunt that landed  former partner Albert Trummer in trouble with the
fire marshal  twice.
Skirting the law seems to be a favorite business "practice" of this newly arrived darling of the blogosphere. Its former owner and bar keep Albert Trummer was arrested for setting the bar on fire TWICE as a Vegas-style publicity stunt. Historic Doyers street, unbeknownst to Trummer, was the site of one of the most horrific fires in lower Manhattan , a good reason why the FDNY came down hard on Trummer for his pyrotechnic stunt designed for the deep-pocketed-but-feeble-minded. We gripe at times over city agencies' numerous fines and undercover stings, but this was definitely a life saving arrest that sends a message to other would-be juvenile showmen with matches and alcohol.

The current owners of this signless not-so-secret hideaway  (the Times is hardly an underground source) are Heather and her brother Christopher Tierny. Cage fighting could be a basement attraction at this establishment given physical altercations taking place there.

As the saying goes, "with friends like these who needs enemies?" Apotheke is not a friend to Chinatown.
Neither of the Tierny's nor their employees give a sh*t about Chinatown. They don't even have a sign.
Neighbors don't dump their garbage in the street, and they certainly don't violate fire codes that endanger residential buildings. Trummer boldly said after his arrest that " he would like to "teach the Fire Department about the flammability of different alcohols". - Really?


As a service to New Yorkers we remind you that the Department of Sanitation takes illegal dumping seriously. There are rewards offered to citizens who report illegal dumping in their neighborhood - I'm just sayin'............

The Department of Sanitation has two programs through which the public can collect monetary awards for reporting observations of illegal dumping. Under the first - The Illegal Dumping Award Program - you must be willing to sign an affidavit and appear at the Environmental Control Board (ECB) hearing. Under the second - The Illegal Dumping Tip Program - information about your identity remains confidential.
The Illegal Dumping Award Program:
Under this program, a person who observes illegal dumping and completes an affidavit leading to the conviction of those responsible is eligible for rewards of 50% of the fine collected. The individual must appear at the ECB hearing if the respondent appears at ECB to challenge the summons issued pursuant to the affidavit.
The Illegal Dumping Tip Program:
Under this new program, a person who provides information leading the DSNY to catch the dumper in the act, would be eligible for a reward of up to 50% of any fine collected. Information on the individual's identity would remain confidential and complainants would not have to appear at an ECB hearing. However, Sanitation Enforcement personnel would have to subsequently "catch the dumper in the act" based on the tip. 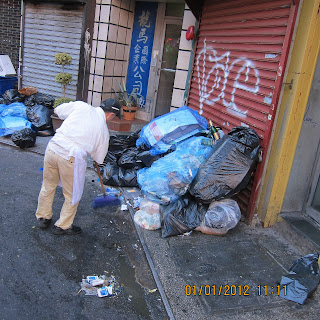 An employee from a neighboring establishment has to sweep up
Apotheke's mess.
Posted by Watchdog at 9:53 PM

Apparently high end drinking obviates the need to deal with garbage in a legal manner. Apotheke should not defecate where it wants to establish itself. These are not considerate people, at least not considerate to the local people in any way, shape or form.