I spoke on behalf of Lin Sing Association and The Chinatown Community Young Lions at the press conference called by Senators Squadron and Avella, with Congresswoman Valazquez on Sat. Feb. 18th '12 .
The senators have introduced legislation that would force companies to the bargaining table so that an impasse like the one between MSG network, and Time Warner Cable doesn't happen again in New York. 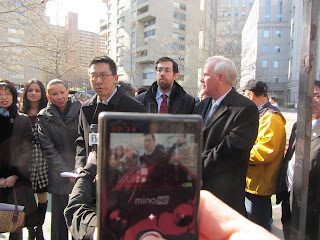 Here is the video of the press conference.

I made the point that Chinatown was a catalyst in the decision making between the two companies as evidenced by the stalemate being broken less than 48 hrs after MSG, through Kaimen Company (which is presenting Chinatown Restaurant Week in March), organized a community briefing,  a much publicized press briefing, and Knicks game viewing party in Chinatown at Nom Wah Tea Parlor last Wednesday.
Posted by Watchdog at 4:42 PM