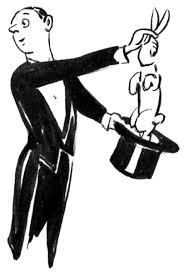 The "stink campaign" explained.
In the same way a magician uses slight-of-hand to misdirect and misguide the casual viewer, the Chinatown BID proponents and pro-BID politicians have tried their mightiest to pull a rabbit out of their hat. Property owners and residents (you know the ones paying the real estate taxes) have their say on the subject:
To the editor:
Re, “Last Ditch Attempt to Stop Chinatown B.I.D” (news article, Aug. 17) and Supporting a Chinatown B.I.D. (editorial, Aug. 17)
Chinatown Partnership, LDC (CPLDC), after morphing from Rebuild Chinatown Initiative, has, for years, orchestrated “Chinatown Stinks” campaigns focusing on dirty streets to justify their agenda to institutionalize a Chinatown Business Improvement District in our community. Before 9/11, Chinatown’s businesses were booming in the historic core of Chinatown. Weekend lines trailed out most of Chinatown’s restaurants onto sidewalks, necessitating long waits as families and friends gathered for meals alongside tourists who came to eat, shop and sightsee — dirty streets or not.
After 9/11, the boom busted as a result of a confluence of factors. The barricading of Park Row (the main street connecting Chinatown to Lower Manhattan) and other roadways, the takeover of a local park for police parking, and the installation of multiple security booths/barricades created a hostile “under siege” environment. The confusing redirection of four to five bus routes that operated on Park Row, along with the permanent closure of the Park Row/Chinatown exit ramp from the Brooklyn Bridge, created massive traffic congestion on secondary roadways during rush hours. These conditions sparked lawsuits for the return of the park and an environmental impact study. The lack of new directional signage for the street changes, the pervasive government permit placard abuse in Chinatown and throughout Lower Manhattan, and the loss of the 400 car Municipal Garage shortly before 9/11 forced the closing and/or changing of hands of over 29 small businesses within two blocks of Park Row because of the confusion, limited access and lack of parking.  Friends, family, shoppers, and visitors, who used to frequent Chinatown, experienced frustration. To this day, they continue to avoid Manhattan’s Chinatown post 9/11, expressing preference for Flushing or Brooklyn where access and parking are not a struggle.
During the recession of 2008, the city announced plans to dig up Chatham Square (which had just been completely reconstructed nine years earlier) in order to: install a water tunnel, redesign and narrow the Bowery, install a new pedestrian plaza, and take Park Row off the grid as a street, all of which would have further hampered traffic and hurt our businesses. Halting implementation of these plans was fought and won with the help of our elected officials and more than a hundred small businesses around Chatham Square, who hurriedly signed a petition objecting to the L.M.D.C. funding of this project.  Also the Civic Center Residents Coalition was forced to go toe to toe with the DOT through several community boards.
None of these critical battles to reclaim our streets and neighborhood were on Chinatown Partnership’s agenda. CPLDC’s narrow focus and mantra was always “dirty streets” as the major cause of Chinatown’s ails, making it easier to justify the BID’s self-serving, street-cleaning existence. CPLDC used the faulty premise that cleaner streets would be how to rebuild Chinatown and obtained LMDC funds. It spent the bulk of $5.4 million on sanitation and its administration, still leaving store vacancies and a sluggish economy in the core of Chinatown in its wake. This is why we look with tremendous alarm at the prospect of this myopic group controlling the future of Chinatown’s small business and hence residential environment. Chinatown does not need a BID.
Sincerely,
Jeanie Chin
Posted by Watchdog at 11:32 PM