The point has been made in front of our own eyes recently that dashboard placards are downright dangerous in the post 9/11 world we live in. If there was one single tool that is useful to terrorist, it's not a van with explosives, it's a van with explosives AND A PLACARD.   The placard gives the terrorist unhindered access to sensitive areas, allows him to park for hours,and puts US all in jeopardy. What good is a police barricade when all it takes is a piece of laminated paper (bought for $20.00) to gain access?

The Civic Center Residents Coalition has been saying for years that using an illegal placard amounts to impersonating an officer, this is what happened at Times Sq. We are all lucky that this unattended van was not used for terrorist purposes. Lucky, that is , this time.  The word is out now that there are simply too many bogus placards out there, combined with the intimidation the placard represents, that enforcement of parking rules is virtually impossible. This makes us unsafe Mr. Mayor.

The use of placards , so long as there is a single bogus placard in existence, confuses ticket agents and makes enforcement virtually impossible. This is the reason why NYC must do away with placards completely !  Three years ago we said this, and now our case has been made very clear.

If the Mayor and his bogus DOT commissioner Sadik "Con" refuse to completely revoke all placards and enact fast fleet technology for all government associated vehicles, both government fleet and privately owned, then we will be in constant danger . Fast Fleet technology, already in use in other cities in America, negates the use of placards and relies on 21st technology which is already in place in the rental car industry ; satellite tracking.

The reluctance of a full transition from plastic laminated paper placards (easily forged and confusing to ticket agents) to tracking all government employees by satellite is no longer a choice that needs to be debated, tested, ,and bartered, it is a necessity. The current system wastes tens of millions of dollars (all of which can be used for the subway infrastructure) AND thanks to this recent NY Times article we now know the DANGER of this system can kill thousands of NY'ers.

The threat is real, the placards must be replaced by fast fleet. There is no longer a choice.

Here is the NY Times article: 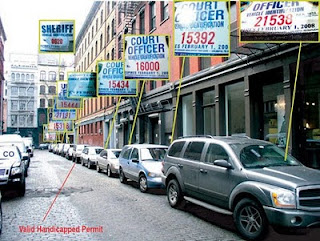 Just try to pick out the "bogus" placard among these, apparently a NYPD traffic agent can do it either.

As Michael Bloomberg claims NYC is a safer City than it was in 2001, we have our doubts so long as

his employees are allowed to hide terrorists in our own neighborhoods by using placards on dashboards.