When Will NYC Government Go GREEN With Their OWN CARS?!?!?!?!? 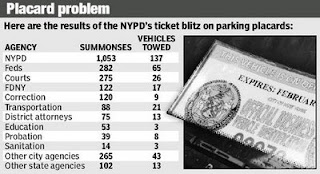 On Feb. 13th 2009 CCRC reported on Washington D.C.'s progressive and aggressive approach to curtailing abuse of its government fleet of cars. Washington D.C., like NYC, suffers from a plethora of a good thing gone bad - the "good thing" is about to come to an end for government employees in Washington where tracking, online booking and "zip-car-like" technology is employed to cut the government fleet of cars from 360 to just 60 !!
Washington D.C. Mayor Adrian Fenty said that the majority of government cars sit for hours and days unused and the City had to pay for that storage time. A much better solution, according to the Mayor was to make a small amount of cars available on an "as-needed" basis. Like Zip Car rental cars, the user, in this case the government employee would have to go on line to "book" a car with a limited amount of time, after which time the car would have to be returned to its "home base".

Here is another article about Washington D.C.'s approach to their government cars.
New York's own Mayor Bloomberg should take some lessons from Mayor Fente and get serious about his GREEN initiative.

When the D.O.T. and Deputy Mayor Skyler met with members of the Chinatown community, the only community to propose this solution to address ourown placard abuse problems, they were met with this statement from the Deputy Mayor "placards are a perk that we believe we owe our employees since we don't compensate them with very much pay".

It's not a surprise that the Mayor never considered this solution when he and his "sheep" in the City Council proposed congestion pricing as a solution to reducing the number of cars in Manhattan. The Mayor claims to have done a lot to reduce government car abuse by its own employees, but in reality he has left himself an "out" by never proposing a permanent solution.
Placard reduction can quickly and insidiously become placard "growth" once again.

Tracking and online booking of government vehicles provides a permanent solution. Until the Mayor adopts this 21st solution to abuse that even he admits has gotten out of hand, the citizens of NYC will continue to suffer. Taxing the rest of us is not the solution. This is the start of a solution, the City must consider it.

D.C. has launched a vehicle fleet management program for its government employees through Zipcar’s FastFleet service.

D.C. Mayor Adrian Fenty and Zipcar chairman and CEO Scott Griffith made the announcement on Monday.

D.C. government employees can access and reserve city vehicles at fast-fleet.com and select a car type and location. Through a city-issued access card and integrated card reader mounted under the windshield, they can drive the car for official business use.

So far, D.C. has cut about 360 vehicles from D.C.’s motor fleet, yielding an estimated savings of $6.6 million over five years.

“D.C. is leading the way for cities to implement cost effective and sustainable solutions for fleet management,” said Griffith. “We are pleased to partner with D.C. to launch our FastFleet solution and bring the benefits of our car sharing technology to governments across the country.”

The program reduces costs by maximizing fleet utilization on an hourly basis, allowing many trips to be supported by a smaller number of cars. Fleet Share cars average as many as 10 drivers for every one car.
Posted by Watchdog at 12:01 AM