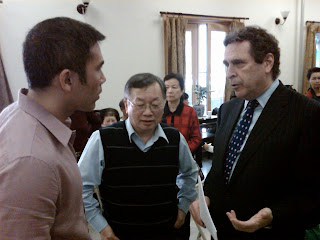 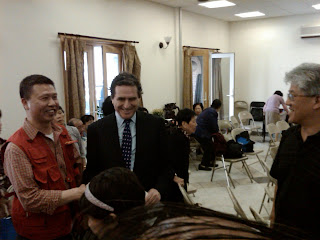 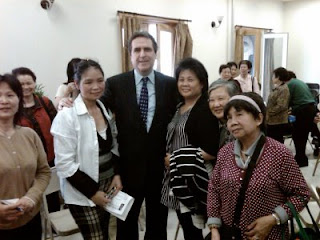 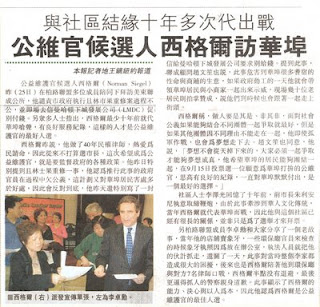 Norman Siegel was hosted by the 109 year old Lin Sing Association in Chinatown at 49 Mott St. on Saturday the 25th.

The Civic Center Residents coalition introduced Mr. Siegel to Eddie Chiu, a man who has been featured in the New York Times as a political powerhouse in Chinatown.

Norman's approximately 30 minute presentation touched on subjects that included the role of the Public Advocate, what he would bring to the office, and how the public advocate can negate the need for Business Improvement Districts in Chinatown. He also talked about how he personally objects to the undemocratic nature of BID's as a whole.

He talked about how he would bring public advocate volunteers into each and every neighborhood to hear complaints on a regular basis to report to the public advocate.

"Problems that are systemic, those which affect groups of people, we will take that fight on as well and we'll do it by trying to persuade people but if that doesn't work, then I'll take them to court and sue them FOR the people." said Norman.


Norman spent a few minutes to talk about his objection to the Chatham Square plan presented by the D.O.T. and he presented a letter which he personally wrote. It was addressed to the Lower Manhattan Development Committee (LMDC) who would be responsible for 50% of the funding for the City's Chatham Square project.. Norman knew about the controversy surrounding the Chatham Square project and assured the audience that he agreed with the Chinatown community in asking the LMDC to reconsider funding a project that was so ill conceived and unpopular.

Jan Lee, a Chinatown resident and business owner shared with the audience his own experience as a defendant represented by Norman. Jan's employee was the victim of false arrest and Jan's office was illegally searched by a D.E.P. officer. Jan said that although he possessed a valid license to deal in antique ivory, a D.E.P. officer interrogated his employee for four hours eventually gaining entry to Jan's office where he found ivory pieces. This, according to the officer, was enough to handcuff and process the employee due to the dollar value of the ivory. Jan's employee spent a night in jail after being led out of the store in handcuffs, an embarrassing and traumatic experience.
According to Seigel, although the license in the display case at Jan's store showed an expired date on it, a simple five minute phone call would have revealed that Jan possessed an up to date license, but since Jan was away on business the new document was not yet on display.
Jan explained that had it not been for Norman's notoriety and reputation as a fighter and defender of civil rights, the charges against Jan would not have been dropped. Jan said that Norman would bring his expertise, his notoriety, and his professional career to the office and that Chinatown would benefit greatly from this.

The presentation was attended by approximately 75 Lin Sing members, Chinatown business owners, and residents from the Chinatown and lower East side area. Representatives from Chatham Towers, Chatham Green, and Southbridge Towers were also present.

After the presentation many audience members clambered to pose for pictures with the candidate, Mr. Siegel obliged while answering questions, even pausing to kiss a woman on the cheek.

Chiu and Siegel stood in the middle of the crowd and discussed Chinatown issues, politics, and the race as Lin Sing members prepared the room for the next order of business , the singing club. Within moments after the picture taking the room broke into Chinese folk songs. Siegel was being guided away from the singers with an audience member as they continued to talk about Chinatown.
Posted by Watchdog at 4:05 PM