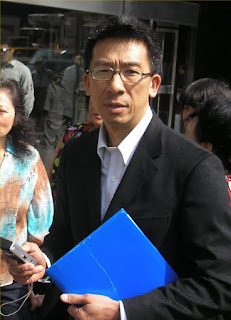 May 15, 2013 | Filed under: Under Cover | Posted by: admin
Lee on the Races
Chinatown leader Jan Lee has had his share of political fights with Margaret Chin over the years so we were surprised last week when he told us he hasn’t ruled out supporting her reelection bid to the City Council.
“Margaret and I are certainly cordial,” he told us, saying their disagreements have always been about issues. Lee, a founder of the Civic Center Residents Coalition, fought against the creation of the Chinatown Business Improvement District, which Chin strongly supported.
“We need to talk in a very candid way about the next four years on how she would improve,” Lee added.
His biggest concern is neighborhood traffic problems caused by several things including the security closure of Park Row. He said he has been dealing with family issues, but he hopes to be able to speak sometime soon with Chin and her Democratic primary opponent,Jenifer Rajkumar.
He has flirted in the past with running himself, but said he definitely will not be on the ballot this year.
In other races, Lee is backing Comptroller John Liu for mayor and Julie Menin for borough president.  He praised Liu’s work exposing the CityTime scandal, and Menin’s effort helping to get the Khalid Sheikh Mohammed trial moved out of Lower Manhattan.
“We really connected on that issue,” he said of Menin. “I find her to be a good problem solver and not just a complainer.”
Chin Notes
Speaking of Councilmember Margaret Chin, we had been thinking she scheduled her announcement strategically around the time of Downtown Independent Democrats’ fundraiser in Battery Park City to lessen the chance of naysayers attending, but even Chin critic and D.I.D. veteran Sean Sweeney, who often ascribes ulterior motives to opponents, said there was nothing to the theory.
Sweeney said Chin showed up to the fundraiser right after the announcement and “she gave more [of a donation] than the average politician gave.”
He did take a dig at Chin, pointing out she did not win the Coalition for a District Alternative endorsement that she won four years ago. CoDA voted not to endorse, but its most powerful member, Councilmember Rosie Mendez,  is backing Chin.
Chin’s campaign spokesperson, Austin Finan, laughed at the notion that Chin is weaker without CoDA.  “Whatever makes them sleep at night,” he told us.
He said in addition to support from Assembly Speaker Shelly Silver and Cong. Nydia Velazquez, Chin will be getting nods from most if not all of the local elected officials.
“We’re stretching it out so to speak,” Finan said.
City Move
A last quick one on Margaret Chin. Amy Varghese has just joined her staff as the new communications director. She replaces Kelly Magee, who is now working in the press office at the Dept. of Buildings.
Rockwell,  Imagination & Reality
We were recalling the hoopla that began five years ago when renowned local architectDavid Rockwell started talking about designing — at no cost — a new Downtown playground with professional playmates (Rated G of course), a k a “play associates,” to help children interact with innovative, movable equipment.
We paid a visit the other day with a 3-year-old source close to UnderCover to see how the promise of Imagination Playground was holding up three years after opening.
The playmate at the Seaport park did not seem to do any sort of play facilitation, which seemed fine since perhaps it’s better for kids to, well, use their own imagination.
Rockwell’s large and light building blocks are more than a nice touch, although creativity apparently extends only so far since we were told to bring one of them back to the approved block play area.
Overall, the design puts the playground above most in the city, but what really sets it apart is the well-maintained bathroom and the extremely clean sandbox — no small measure considering pediatricians and public health experts will tell you that germ-wise, sandboxes are the most hazardous part of a playground.
Bike Monitors
We noticed city Dept. of Transportation workers Tuesday holding up stop signs on the Ninth Ave. bike lane when the bike lights turned red. D.O.T.’s Scott Gastel said the rush hour program started last month and is part of the city’s effort to make sure things are safer when the new bike share program rolls out Memorial Day.
Posted by Watchdog at 11:28 PM