Seniors, children and disabled menaced for a decade at local Chinatown "Park" 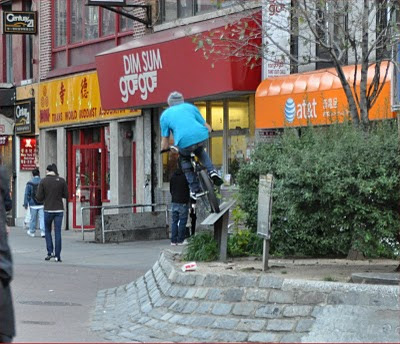 Click photo to enlarge
A cyclist uses the bronze plaque of the Lin Ze Xu statue. The cobblestone planter was designed and installed by D.O.T.
The cement which was used to smooth over the cobble stone, was put there by vandals in the middle of the night - dressed as construction workers. Smoothing over the cobblestone was done in order for skateboarders to use the planter as a ramp to skate on.
This exemplifies a level of disrespect that is so profound it is beyond words.

click photo to enlarge
A Cyclist using a bronze plaque placed in front of the bronze statue of Commissioner Lin ZeXu - a hero to millions of Chinese. Not only is this disrespectful, this cyclists is oblivious to the danger he poses to pedestrians trying to simply cross the park. 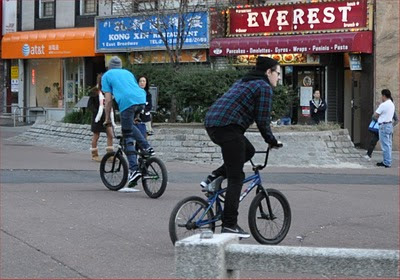 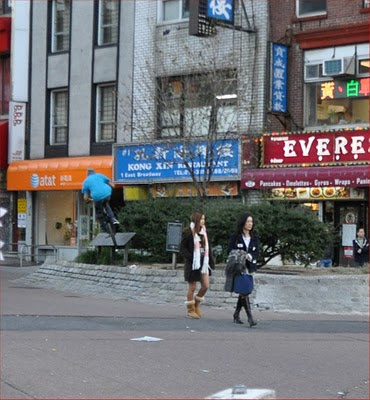 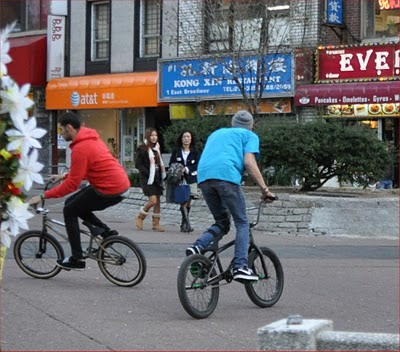 click photo to enlarge
Location: Kimlau Square , a national park.
The Monument to Benjamin Kimlau - War Veteran
"In 1961, a local law named this island within Chatham Square in recognition of the contributions of Lt. Kimlau and the veterans post. That year, the post erected this memorial, designed by architect Poy G. Lee (1900-1968). Standing at the head of Oliver Street, it is reminiscent of a triumphal arch. The memorial stands eighteen feet nine inches in height and is sixteen feet wide. Inscribed on the memorial is a dedication in both English and Chinese: “In Memory of the Americans of Chinese Ancestry who lost their Lives in Defense of Freedom and Democracy.”
What is the bronze plaque for? Commisioner LinZeXu - a hero to the Chinese people
click link below to see VIDEOs
VIDEO OF CHINATOWN BANKS in ACTION
Chatham Green Private property, Foley Square, Chinatown Banks - VIDEO
"Chinatown Banks" as it is known to skateboarders and cyclists (Chatham Square - its official name) continues to be a favorite for bikers and skateboarders, some who travel from outer boroughs just to skate or bicycle on the gently sloping "ramps" stupidly designed and installed by The City Of New York.

NYC from KHYBER on Vimeo.

UPDATE: Community Board 3 has seen the photos in this posting, and are speaking with NYPD, and the Department of Transportation, and The Parks Dept. Community Board 3 will have this issue on their agenda to be heard in January - CCRC will keep you posted.
Posted by Watchdog at 8:40 PM

SAVAGES! Law enforcement never noticed this, eh, though it's been going on for a decade?