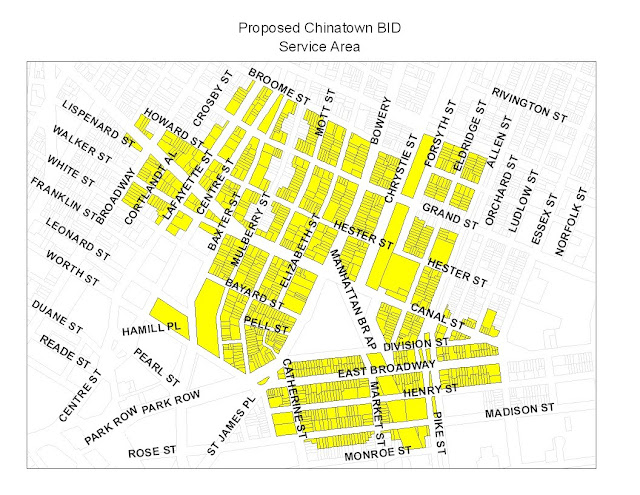 2010 map provided by the Chinatown Partnership LDC, Little Italy is clearly omitted.
"The BID claims that it includes Little Italy, yet their own map belies this assertion: three blocks of Mulbery Street have been removed at the insistence of the restaurant owners.
I've never seem a BID face such opposition. This duck is dead in the water." - Sean Sweeney SoHo Alliance

Sean Sweeney of the SoHo Alliance is crying "foul" because the Chinatown Partnership LDC and it's Business Improvement District Steering Committee ain't hearin' him. Actually one person is listening, Wellington Chen, the Partnership's Executive Director -- it's his responses that are puzzling.- $132,000.00 a year and these are Wellington's comments?
Sean claims that the proposed Chinatown BID encroaches too far into SoHo, an area that he and others fought long and hard to preserve and they don't want Chinatown's BID committee dictating what happens there. Despite what it says in the article, Little Italy is not in the Chinatown BID proposal, another curious "inaccuracy" according to Sweeney and Little Italy merchants.

In answer to Sweeney's claims, Chen references Bosnia, Bin Laden and yes, Martians, why not? Perhaps the Martians know how $7 million was spent. Most, if not all non-profits (5013-c's), publish their yearly expenses on their websites. Not so curiously, The Chinatown Partnership LDC has never done so, transparency has never been their forte, despite neighborhood requests to reveal their spending. 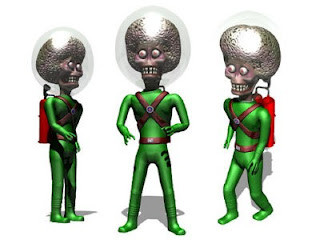 
Soho Alliance says whoa to Chinatown BID
By Lincoln Anderson
A border war is flaring between Soho and Chinatown as two new initiatives are causing a leading activist and a property owner to ask: Who calls the shots?
Sean Sweeney, director of the Soho Alliance community group, is outraged that the Chinatown Working Group has the nerve to consider what he's calling a "rezoning" of a portion of the southeastern corner of the historic artists’ enclave. As part of its rezoning efforts, the working group is studying the area around Canal, Centre and Lafayette Sts. — parts of which were just included in the Landmarks Preservation Commission’s extension of the Soho Cast-Iron Historic District, which was designated May 11.
“Just because a Chinese person owns a business there, doesn’t mean it’s Chinatown,” Sweeney protested.
He added that the entire area the Chinatown Working Group is currently studying is very broad, based on the map that they are currently putting out: The study area stretches into other neighborhoods, not just Soho, he noted. He raised this with Jim Solomon, a co-chairperson of the working group.
“I looked at the map and it went all the way to 14th St. and Avenue C,” Sweeney said. “Jim said that’s because they’d rather have a large map and whittle it down, rather than have a small area, and have people say, like they did in Chinatown when they were doing the East Village/Lower East Side rezoning: ‘You didn’t include us.’”
Sweeney said it’s fine to do it that way — “but just get Soho out of there, because I don’t want to have a zoning fight.”
The bottom line, according to Sweeney, is that Soho residents have worked hard over the years, both to landmark their neighborhood, in 1973, and to carefully make selective zoning modifications. They don’t want someone else stepping in now and telling them what to do.
“If Soho zoning’s going to change, it’s got to come from inside the community,” he declared.
Solomon declined to comment for this article. However, he has previously stated that the study area is just that -- still just a study area, for now -- and that, when all is said and done, rezoning in certain spots within the study area may or may not be part of the equation.
In a double whammy for Sweeney and his Soho organization, a planned Chinatown Business Improvement District would also include part of the historic district extension area, as well as some blocks in Soho’s southeastern corner. (The BID effort has no direct connection to the Chinatown Working Group.)

Sweeney recently received an e-mail from Kurt Trenkman, whose family owns eight buildings on the block bounded by Broome, Grand, Centre and Lafayette Sts., expressing concern about the BID’s boundaries. “We wish to make known our opposition to inclusion of our block in the proposed Chinatown BID,”
Trenkman wrote. “First, our buildings are located in Soho, and not within the borders of Chinatown.

It is well established historically that we are part and parcel of the Soho district, as reflected in maps, the historic use to which our buildings were put, and the M1-5B light-manufacturing zoning of our buildings.” The property owner noted that the block was slated for inclusion in the Soho Historic District Extension.
Sweeney said he subsequently spoke with Trenkman on the phone.

“I love this quote,” Sweeney said. “He said, ‘I have no intention of being taxed to clean up Mott St.’”
Sweeney said he himself made similar comments to Wellington Chen — executive director of the Chinatown Partnership, the group spearheading the push for the BID — at a sit-down last week.
“This BID goes all the way to Rutgers St. It’s a huge BID,” Sweeney said he told Chen. “Why should I clean up under the Manhattan Bridge?”
Sweeney said Chen responded that the BID isn’t concerned about boundaries, adding that an astronaut looking back at Earth from the moon wouldn’t see any boundaries — which Sweeney said bowled him over.
The alliance director said Jo Hamilton, CB 2 chairperson, who was also at the meeting, tried to smooth things over and told Sweeney to take it easy.
Speaking to The Villager, Sweeney declared the Chinatown BID will never end up with a piece of Soho, and that Soho will win the fight, if it comes to that.

“Wellington was triumphant at Waterloo — but Soho’s going to be Wellington’s Waterloo,” he vowed.
In a telephone interview with The Villager, Chen reiterated, “We have never used the word ‘boundary.’ It seems as if it’s a turf issue.”

Chen said Chinatown needs the BID in order to keep the streets clean, for one thing. The Chinatown Partnership has been helping lead the sanitation effort since its founding in 2006, but a proper BID is needed, he stressed. Back in 2006, Chinatown was ranked as the city’s “fifth-dirtiest neighborhood,” he said.
“After 9/11, the Rebuild Chinatown Initiative interviewed people, and 85 percent of people — Asians and non-Asians alike — said what’s the number one issue? Sanitary conditions,” Chen said.
Everyone benefits from supplemental street sweeping and trash basket emptying, he said.
“We cover Little Italy — does it mean we take over Little Italy? No,” Chen said. “We were struggling whether to call it Solita BID,” as in “South Little Italy,” he noted.

“Don’t go to the race issue,” Chen warned of Sweeney’s failure to embrace the credo of no boundaries. “I don’t want to play the race card. The Soho he’s defining is where the Chinatown Partnership started,” he said, noting it contains the Chinatown Holiday Inn and Maria’s Bakery, the latter there for four decades.
Veering from moon metaphors to ethnic warfare, Chen continued, “I always say, remember Bosnia from 1984. All you need is a couple of people raping and murdering and you’ve got genocide. … I’m not saying Sean is doing that. …

“Bin Laden wants us to fail,” Chen added. But the partnership, through its efforts, has been helping foil the terror fiend’s goal, he said, noting, “For the last three years, we’ve been doing a great job.”
Chen said it all boils down to one basic fact: “We’re surrounded by BID’s. There are 64 BID’s in the city. It’s time Chinatown had its own self-cleaning area.”
Local business leaders have pitched in over the years to finance cleaning crews for Chinatown — Buddhist monks are even breaking out their brooms — but eventually people burn out, Chen said of why a permanent BID is needed.

For her part, CB 2 Chairperson Hamilton is taking things in stride — certainly in comparison to Sweeney.
“Deciding boundaries for any rezoning or BID effort is always the most difficult part of the process,” Hamilton said. “Remember, however, that the planning for both the Chinatown Working Group and the Chinatown BID are still in the early phases. Currently, they are doing their due diligence and engaging the community in conversations, as they should be.

“There are no specific proposals before our board at this time, so we do not know yet if there will be any issues,” she added. “When they come to us, we will want to hear from all those who might be affected, and will take very seriously any concerns they may have before taking a position.”
Perhaps when CB 2’s members do weigh in on the BID border issue, they’ll consider the observations of some “outside observers.”
“At the end of the day, we’re all human beings,” Chen said. “When the Martians look at us, we’re all human beings.”
Posted by Watchdog at 12:49 AM

There was a time when Bin Laden was a convenient rallying point to merge economic success with flag waving. But the impact of terrorism has been long replaced by our own unregulated system -- a failure of our own government -- and the impact is much greater. Bin Laden did not cause a global collapse.

The problem for Chinatown is also government: the city doesn't really seem to care about Chinatown's community. A BID looks like a surrogate for government that will bring gentrification -- good for a few businesses and property owners, but a disaster for the rest. Gentrification is a kind of homogenization. Displacement is a part of it. All gentrified neighborhoods tend to look alike.

It would be great to bring back large-scale labor like manufacturing to Chinatown. That would preserve the community as is and would benefit everyone. But the only such on the horizon are hotels, and they can gentrify.